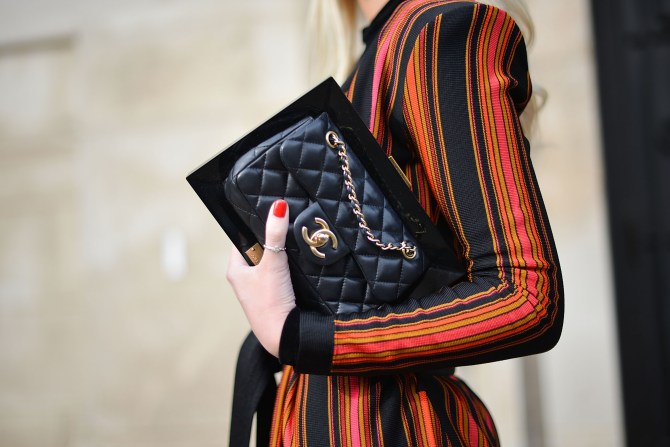 In my closet, I currently have about 35 bags ranging from barely usable micro-sized vintage finds to everyday totes, but I consider only one a true investment: my baby-pink Chanel Valentine East West flap bag, which I was lucky enough to be gifted as a college graduation present. What I consider a fashion investment, to be clear, is something that’ll hold at least 85 percent (or more) of its value if you choose to resell. Having done my homework by stalking sites like eBay and various other online resources, I know if I decided to sell that bag, I’d be able to get the above percentage.

And it’s not just Chanel holding its value like a champ: At this point, you’ve probably heard the Hermès Birkin is the one bag that financial experts consider a more viable investment than stocks or gold, since its price increases by 14.2 percent each year. But a new Birkin is basically impossible to get and an old one can still cost tens of thousands, which … c’mon.

Still, there are other ways to snag a great investment purchase and make it worth your while. I spoke with Sarah Davis, founder of Fashionphile, one of the largest e-commerce resellers of luxury handbags and accessories to get the lowdown on 10 things to keep in mind when both buying and selling.

If you’re treating it like an investment purchase, skip the crazy colors.

“If you buy a Chanel Jumbo flap in black, you’re good to go,” advises Davis. She says the style continues to go up in value and is always in demand. She also suggests that you choose a bag in a neutral color, no matter the brand.

Vuitton is always a good choice.

“The fact is, back in the ’80s, a Louis Vuitton Speedy was $240. Today some of those sell for more than $1,000,” says Davis. She reports that out of many bags Fashionphile receives for resale, there’s no shortage of Louis Vuitton classics. And they sell. Fast. Davis pointed out that Neverfulls, in particular, fly off the shelves.

Limited-edition styles are hit or miss when it comes to investing.

Those kitschy Chanel bags shaped like petroleum cans or matryoshka dolls? Probably not worth purchasing as an investment piece to resell later. “For some of those, you’ll be able to sell them four or five times for what you paid, for others, you only get a fraction of what you paid.” Davis explains that it really just depends on what the current trends are—there’s no guarantee that demand will exist for these items after the initial buzz dies down.

Keep your bags in good shape.

This is the key to recouping a sizable chunk of your initial investment. “If you keep it in good condition and use it for a year or so, you can resell and it and get up to 85 percent back if it’s a luxury piece,” she says. “The sad part is that you may not be able to use your handbag as much as you’d like, but it does allow you to have the ability to switch things up more often.”

Nothing’s a better fashion investment than a handbag.

Davis says, “Several years ago, we sold clothes and they just don’t hold their value as much. It’s always shocking to me–even if it’s a heavily worn bag.”

DO buy your fashion investments secondhand.

“To some degree, bags are kind of like cars,” says Davis. “You drive them off the lot and they automatically lose value. Most bags are like that.” If you buy it pre-owned, you already get a discount, and it’s not hard to find used bags that don’t show signs of use if you look to a reputable reseller.

Avoid buying brands that are discounted elsewhere or have their own outlets.

Outlets and sales are two of our favorite things, no doubt. But when buying a bag with the plan to eventually resell it, it turns out the value won’t hold as well. Prada, specifically, is known to have a variety of outlets around the world (with drop-dead amazing deals) but a bag scored for less will never hold as much value or sell as well as a Chanel or Hermès, two labels that don’t have outlets and never go on sale.

Davis explains that when Louis Vuitton or other designers release limited-edition bags, they often end up at her office for resale the day of the launch. That’s because sometimes it’s easier for clients to sell them than return them. Like the used-car scenario, if you’re lusting after a one-of-a-kind piece, you can save thousands buying it used (and barely touched) rather than new.

Look for discounts on discounts.

Several sites like Fashionphile will also offer an additional discount if an item hasn’t sold after a certain period of time. Davis explains, “Every 30 days we discount by 10 percent.” Taking into consideration that the average price point on Fashionphile is $1,200, it’s a good way to save.

If you’re not planning on buying a bag from a particular designer’s store or a reputable department store, then you’re going to want to make sure you do a ton of research. Get as familiar with the bag that you’re interested in as possible. A great way to do this is to head to the designer’s store and scope out the real bag in person. Get familiar with how the leather of the bag is supposed to feel, what the hardware looks like, and where the logos are actually supposed to placed. Then, be sure to ask for a certificate of authenticity.