The life of a top model can seem glamorous—traveling the world, wearing the latest fashions from top designers, and racking up hundreds of thousands of followers while you’re at it—but it’s hard work getting there, and success relies on a combination of genetics, professionalism, dedication, and sheer luck.

MORE: Class of Spring ’17: Meet the Next Generation of Models to Follow for NYFW

No one knows this better than Canadian supermodel Coco Rocha who was discovered while competing in an Irish dance competition more than 10 years ago. She’s gone on to major commercial and runway success, walking the runway for designers such as Zac Posen, Chanel, and Carolina Herrera, as well as appearing in ad campaigns for brands like Longchamp, Balenciaga, and Banana Republic. She’s also landed the covers of Vogue, Elle, and Harper’s Bazaar, among dozens of other fashion titles.

Since Rocha has so much wisdom on the topic, we went straight to the source. Read on for her top tips on how to be a model.

1. Abandon your ideas about what constitutes a “beautiful” girl.
“I think a lot of young girls—when you’re in high school and you look at the popular girl, and you’re like, she’s got it all,” Coco told STYLECASTER. “Meanwhile, if she were in a casting for a top agency, they’d probably never look at her. What we find beautiful, the agents and the managements [don’t necessarily find beautiful]; they’re looking for quirky, even abnormal sometimes—a blank canvas they want to make into something beautiful or edgy.”

“It’s an interesting concept that we grow up to think bleach blonde hair with tons of makeup and a tan is beautiful, meanwhile [the agencies] are looking at this really tall, lanky girl who has no clue about style and who doesn’t know even if she’s beautiful. Sometimes it’s even your attitude in life that they find alluring—you don’t know quite what you have yet.”

2. Really nail down how you want to brand yourself.
“Now, with social media, it’s so easy to have a voice,” Coco said. “A lot of girls don’t know what their voice is, or their brand. I try to tell girls early on to figure it all out; I decided a long time ago that I’m going to be the quirky, nerdy one, that I won’t be topless, and I won’t be shot [in weird situations] with male models. I wanted to really have them know exactly how I want to be photographed and how I want to be portrayed.”

“In the end, modeling is a business, and your business gets confused if you don’t know what you want to be in the beginning. You have to figure out what it is that you’re portraying; and if you stay true to that, people will follow you and respect you for it.”

3. Good news: Height requirements aren’t always important.
“A four-foot-something girl is probably not going to make it,” Coco said. “Back in the day of the supermodels, you were pretty much a campaign girl or a runway girl. You wouldn’t switch over. But now you have to do both.” 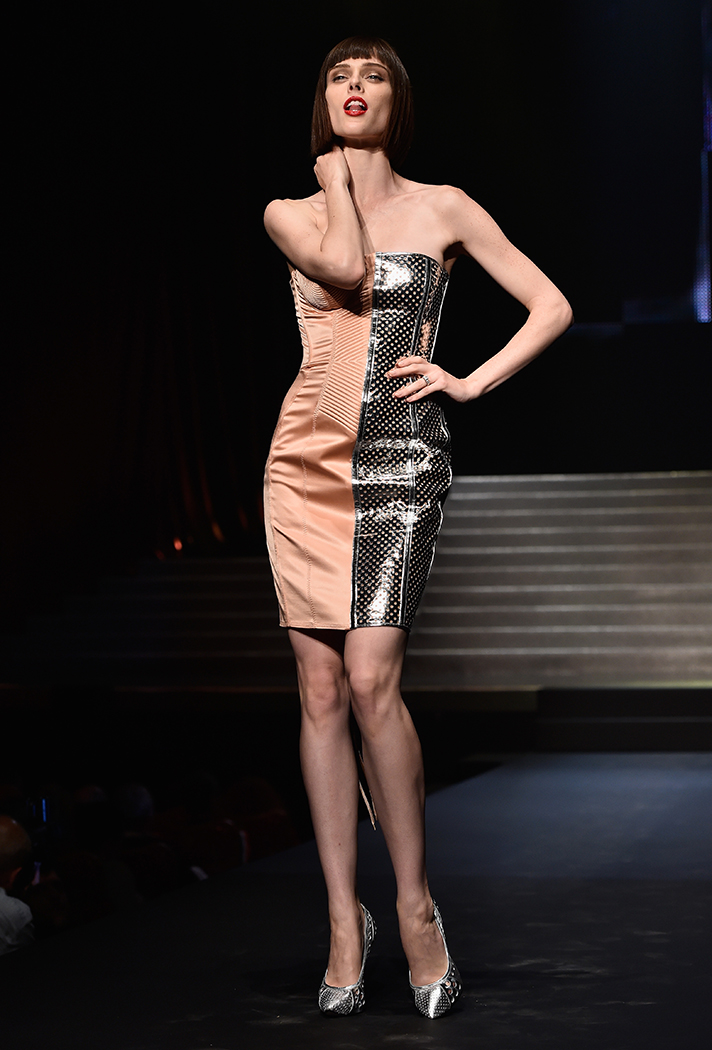 4. Know the right ways to find an agent—and skip modeling school.
“Girls out there who really want to be a model and think they have it, they have to have that attitude of self-promotion,” Coco advised. “It’s weird and it’s awkward, because you are promoting your image, not your brain. Once you get over that, you go to these agencies, you just chat about what you believe in and what you want to do, and you might just find this one agent who says maybe you’re not my favorite look, but I sure do love what you want to do for this industry and for us, and you might just get a yes among the no’s.”

“Go to modeling conventions and get scouted,” Coco said. “Conventions are very smart. I went to Faces West, where a ton of agents come together to see girls go up and down the runway who don’t have agents. They say yes and go ‘I like that girl’ and shift you to Asia or London. But be sure you go to a legit convention.”

5. Don’t be a “yes” woman.
“The models who have this attitude of, ‘I’ll do whatever you say as long as I can be famous,’ that attitude doesn’t work. You will get washed and burned out very quickly,” Coco explained. “The girls who have made it have taken over their career and taken [powerful positions]; Cindy Crawford, she was doing workout videos, and then she was offered to do cigarette videos, and she said no because it wouldn’t look good for her brand.”

“It’s okay not to be everyone’s cup of tea; for some reason a model goes to a casting and if they don’t cast her, she thinks why don’t they like me?” Coco said. “But at the next one they might love you. Models want to be accepted; probably because you came from high school and you just want to get accepted. But it would be boring if you got every single job and I saw you in every single photo. We want you to have highs and lows, as long as the model doesn’t take it so personally.”

6. Be prepared to invest in yourself.
“You can easily run up a tab as a new model,” Coco said. “It comes with the territory, so you have to be very savvy about your accounts. A lot of models think their agents are taking care of them, but early on models must take over their accounts. Even if it’s just looking at it and being like, there’s a charge for a car, but I didn’t take a car. It’s not that your agency’s trying to trick you, but it can also damage you and give you a bigger debt than you need.”

“I’ve been modeling for 10 years and I only started checking my account four years ago,” Coco said. “I knew if I really wanted to take this seriously, [I had to have control].”

7. Understand that the party-girl lifestyle of models portrayed in media is a myth.
“A lot of models think it’s more of a party lifestyle instead of a job,” Coco advised. “But this isn’t how modeling is. If you look back, many people still think of models as a rock ‘n roll lifestyle, and sure there’s a little bit of that; but that’s just not life 24/7. We have to actually arrive early at work, we have to come well rested and look prepared. Some models still go on the subway—I still go on the subway!”

“Don’t think this is going to be the easiest life. You can almost be shell-shocked if you’re really young and you learn that it’s not just all fun all the time. Smart girls will make it—good girls win the race nowadays.”