In 1973, Marlon Brando was awarded Best Actor at the Academy Awards, but he wasn’t at the ceremony to accept it. Rather, he sent Apache activist Sacheen Littlefeather in his stead to reject the Oscar—citing Hollywood treatment of and disregard for Native Americans as his reason for boycotting the event and it remains one of the most iconic moments of protest in Hollywood history. Littlefeather passed away on October 2, 2022, at age 75. So how did Sacheen Littlefeather die and what will her legacy be?

When Brando’s Oscar win for The Godfather was announced by presenters Liv Ullmann and Roger Moore, the then-26-year-old Littlefeather made her way to the stage. Moore went to hand her the award, but she put her hand up in refusal because she promised Brando she “would not touch” the statue if he won (per The Guardian). “He very regretfully cannot accept this very generous award,” she said to the audience in the theater and the 85 million at home who were watching the first ever international broadcast of the Academy Awards. “And the reasons for this being are the treatment of American Indians today by the film industry and on television in movie reruns, and also with recent happenings at Wounded Knee.” She received some cheers but mostly boos, and her act of protest remains one of the best-known disruptive moments in award season history. 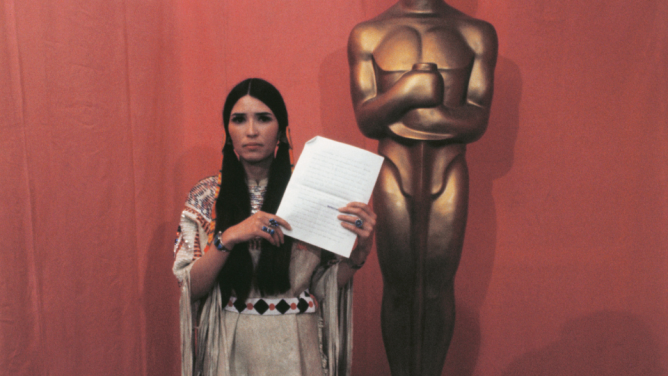 How did Sacheen Littlefeather die?

How did Sacheen Littlefeather die? Littlefeather’s cause of death was not immediately disclosed on October 2, 2022, but it was later learned to be breast cancer. In what would be her final interview, Littlefeather told The Guardian of her health: “I’m very, very ill. I have metastasized breast cancer – terminal – to my right lung. And I’ve been on chemotherapy for quite some time and daily antibiotics. As a result, my memory is not as good as it used to be … I’m very tired all the time because cancer is a full-time job: the CT scans, MRIs, laboratory blood work, medical visits, chemotherapy, infectious disease control doctors, etc, etc. If you’re lazy, you need not apply for cancer.” A statement by the Academy of Motion Picture Arts and Sciences was shared on Twitter on October 2, 2022, with a quote attributed to the activist: “When I am gone, always be reminded that whenever you stand for your truth, you will be keeping my voice and the voices of our nations and our people alive.”

According to Littlefeather’s family, per the New York Times, she died at her home on Sunday in Marin County, California. Her death comes just weeks after the Academy apologized for Hollywood’s reaction to Marlon Brando’s Oscars refusal speech, where the Godfather star boycotted the awards night and sent her on his behalf to protest the treatment of Native Americans.

Sacheen Littlefeather was the first Native American person to ever stand on stage at the Oscars. “Hello. My name is Sacheen Littlefeather. I’m Apache and I am president of the National Native American Affirmative Image Committee. I’m representing Marlon Brando this evening and he has asked me to tell you in a very long speech, which I cannot share with you presently because of time but I will be glad to share with the press afterwards, that he very regretfully cannot accept this very generous award,” she said. “And the reasons for this being are the treatment of American Indians today by the film industry and on television in movie reruns, and also with recent happenings at Wounded Knee. I beg at this time that I have not intruded upon this evening and that we will in the future, our hearts and our understandings will meet with love and generosity. Thank you on behalf of Marlon Brando.”

There were some cheers, but mostly boos. Western star John Wayne was said to have been so enraged by the moment he had to be restrained by security. “I found out that he had been restrained by six security men from assaulting me while I was on that stage,” Littlefeather told Variety in September 2022. “That was the most violent moment that had ever taken place at the Academy Awards.” She said she also experienced racist mockery backstage—people made stereotypical Native American war cries at her and mimed chopping with a tomahawk. Littlefeather was also blocked from speaking publicly about the awards night for many years. “I was boycotted by the FBI. They went around Hollywood and told people not to hire me. If they did, they would shut their film production down,” she explained. “In addition, other people were let on talk shows like Johnny Carson, Merv Griffin, and other popular talk shows. They could go on there and talk about me, but I was never allowed to go on them and represent myself.”

Following the awards night, Littlefeather endured years of abuse and emotional turmoil. In August 2022, the Academy finally acknowledged “her being professionally boycotted, personally attacked and harassed, and discriminated against for the last 50 years” and made a formal apology. “The abuse you endured because of this statement was unwarranted and unjustified. The emotional burden you have lived through and the cost to your own career in our industry are irreparable,” the organization said in a statement. “For too long the courage you showed has been unacknowledged. For this, we offer both our deepest apologies and our sincere admiration.”

In an interview with The Hollywood Reporter days after the public apology, Littlefeather confessed she was surprised by their sentiment, even if it was half a century late. “I was stunned. I never thought I’d live to see the day I would be hearing this, experiencing this,” she said. “When I was at the podium in 1973, I stood there alone… I never stood up onstage in 1973 for any kind of accolades. I only stood there because my ancestors were with me, and I spoke the truth.”