DC universe fans may be curious to know how much Gal Gadot makes as Wonder Woman. (Let’s just say her super-powered salary kicks our paychecks in the ass.)

Gadot made her debut as the DC comics hero in 2016’s Batman v Superman: Dawn of Justice. However, it wasn’t until 2017’s Wonder Woman that Gadot and Wonder Woman (a.k.a. Diana Prince) proved themselves as box office superheroes. The film, which was the ninth installment in the DC Extended Universe, was a box office success, with more than $412 million grossed in the United States alone. After starring as Wonder Woman in 2017’s Justice League, Gadot put back on her cape (just kidding, Wonder Woman doesn’t have a cape) for the titular film’s sequel, Wonder Woman: 1984, in December 2020. The film, which premiered on Christmas 2020 on HBO Max and in theaters, saw Wonder Woman find a mysterious object called the Dreamstone, which allows users to make a wish—at a cost.

It’s been almost five years since Gadot’s debut as Wonder Woman, the Amazon warrior goddess, and in that time, she’s led one of the DC Extended Universe’s most popular franchises. But how much does Gal Gadot make as Wonder Woman? Find out everything we know about her salary ahead. 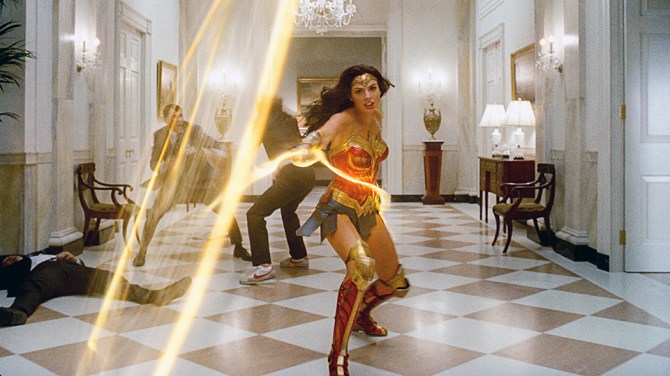 How much did Gal Gadot make for Wonder Woman?

Though 2017’s Wonder Woman was a box office smash, only a miniscule amount of that budget went to Gadot’s salary. The Daily Dot reported in 2017 that Gadot was paid only $300,000 for her first Wonder Woman movie. Of course, the salary isn’t unusual for superhero films, though it is odd given Wonder Woman’s success. According to Deadline, Chris Evans was also paid $300,000 for his debut as Captain America in 2011’s Captain America: The First Avenger.

Though Gadot was the face of one of the most successful DC Comics movies Warner Bros. has released to date, with 2017’s “Wonder Woman” taking in over $821 million at the worldwide box office, she was only paid $300,000 to portray the superhero — a figure that was a shock to many when it was revealed in 2017. Still, Gadot’s salary for Wonder Woman does highlight the pay gap in Hollywood when it comes to actors and actresses. According to Forbes, Gadot’s Justice League costar Henry Cavill was paid $14 million as Superman for 2013’s Man of Steel, which grossed about $100 million less than Wonder Woman did in the United States.

How much did Gal Gadot make for Wonder Woman: 1984?

After the success of 2017’s Wonder Woman, Gadot was able to negotiate a higher salary for its sequel. In November 2020, Vanity Fair reported that Gadot was paid 33 times more to reprise her role as Diana Prince in Wonder Woman: 1984. Her salary for the film? $10 million. “The success of the first ‘Wonder Woman’ film — for which Gadot was paid only $300,000, a figure that caused outrage in some circles as it paled in comparison to what many male action stars take home — helped catapult her onto the list of the highest-paid actresses in Hollywood,” Vanity Fair wrote. “For ‘Wonder Woman 1984,’ she reportedly earned $10 million.” Variety also reported that Gadot made $10 million for the DC film.

Still, as Vanity Fair notes, the amount is still much less than what other leading men, such as The Rock or Leonardo DiCaprio are making. The Rock, for example, will make $20 million for the upcoming film Red Notice with Gadot, according to Deadline.