After Andy Cohen called her out at the season 11 reunion, Bravo fans were left with two questions: How much does Erika Jayne make on RHOBH and was her Real Housewives salary enough for her to leave her ex-husband, Tom Girardi, before their divorce?

Erika—whose full name is Erika Girardi—joined The Real Housewives of Beverly Hills in season 6 in 2015. In November 2020, Erika file for divorce from Tom—a former attorney and the co-founder of his own law firm, Girardi Keese—after 22 years of marriage. “This is not a step taken lightly or easily. I have great love and respect for Tom and for our years and the lives we built together. It is my absolute wish to proceed through this process with respect and with the privacy that both Tom and I deserve. I request others give us that privacy as well,” she said in a statement at the time.

That same month, Erika and Tom came under fire after a federal judge froze Tom’s assets following allegations he “misappropriated at least $2 million in client funds that were due to the families of those killed” by the 2018 Boeing 737 MAX Lion Air Flight 610 crash in Indonesia. Tom and his law firm filed for two Chapter 11 involuntary bankruptcy petitions in December 2020.

In August 2021, Erika was sued for $25 million by the trustee overseeing Tom’s bankruptcy case. According to court documents obtained by Us Weekly, Erika was implicated in the lawsuit because she allegedly knew Tom’s firm was paying for her expenses—which included $1.5 million in payments to a talent agency, $260,000 in legal bills and $252,000 in makeup artist fees—for at least 12 years. The trustee requested that the court order Erika to repay the $25 million plus interest. “It would be a miscarriage of justice if [she] was allowed to simply walk completely free of owing over $25,000,000 to the estate,” the filing stated.

“The law firm paid out over $25 million in expenses which were approved and generated by one person, Erika Girardi,” the statement continued. “We are hopeful that Ms. Girardi comes down the mountain from a place of privilege and obscene wealth and returns some of these expenses so the former clients and creditors of this law firm can mitigate the horrific and unfair losses perpetrated by her husband and others.” 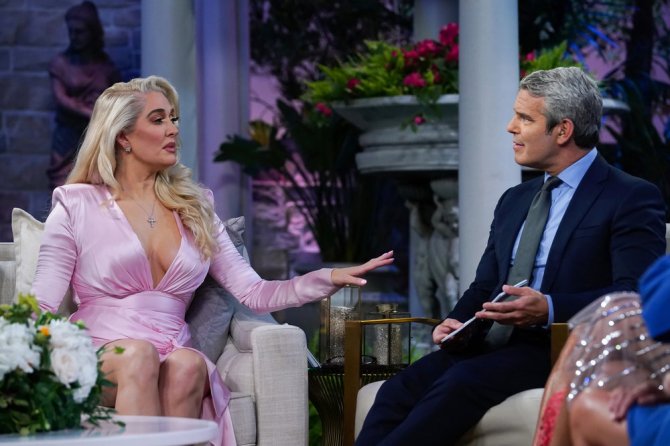 How much does Erika Jayne make on RHOBH?

So…how much does Erika Jayne make on RHOBH? The New York Times reported in October 2021 that Erika made $600,000 for season 11 of RHOBH. The salary is a $100,000 raise for Erika, who previously made $500,000 per season, according to The Sun. (According to the newspaper, Erika’s RHOBH co-stars, Kyle Richards and Lisa Rinna, also made $500,000 per season, though their current salaries are unclear.)

Erika’s RHOBH salary came into question during the Bravo show’s season 11 reunion in October 2021, where host Andy Cohen questioned why she couldn’t leave Tom earlier before their divorce. “Why didn’t you leave Tom sooner?” Andy asked, to which Erika responded, “Where was I going?” Andy then hinted that Erika’s RHOBH salary was enough for her live on her own without her ex-husband. “I know what you make on this show,” he said.

As for season 12, a source told Us Weekly in October 2021 that Erika’s RHOBH salary is set to be even higher if she returns next season. “It’s going to be much more next season,” the insider said. Given that Erika was the “sole focus this season” and was “put through the wringer and following producers’ orders” for season 12, the insider noted that there’s “no question” the Bravo star will “demand a higher paycheck” if she decides to come back. “The ratings were off the charts because of her story line and what she’s exposed,” the source said. “What she’s dealing with [regarding] Tom and the court is not over yet so you can only imagine what next season is going to bring.”

What is Erika Jayne’s net worth?

How much is Erika Jayne’s net worth? According to Celebrity Net Worth, Erika is worth $5 million, which is impressive on its own but just a fraction of how much Tom was worth before his lawsuit According to Celebrity Net Worth, Tom is worth $100 million. As for Erika, much of her net worth comes from her RHOBH salary, as well as music and book sales. Erika, who has done campaigns with companies like ShoeDazzle and Too Faced, also received a salary for her Broadway run on Chicago in 2020.