The Bachelor made history when Matt James was announced as the first Black Bachelor. But anyone who follows Matt knows that his love story with Tyler C. is cuter than any romance he’ll ever have, which makes us wonder: How did Matt James and Tyler Cameron meet before The Bachelor 2021?

For those who don’t know, Matt, a 29-year-old real estate broker from New York City, was announced as the season 25 Bachelor in a Good Morning America interview on June 12, 2020. He is the first Black Bachelor in the show’s 40 seasons and 18-plus years on air.

“It’s an honor,” Matt said on GMA. “I’m just going to lean into myself and how my mom raised me and hopefully when people invite me into their homes on Monday night they’re going to see that I’m not much different from them and they see that diverse love stories are beautiful.”

While Matt’s announcement was a surprise, he isn’t a complete stranger to the Bachelor franchise. Before was announced as the next Bachelor, Matt was a contestant on Clare Crawley’s season of The Bachelorette, which was postponed due to the current world health crisis. But more importantly, Matt is the best friend of Tyler Cameron, the runner-up on Hannah Brown’s season of The Bachelorette. (Matt and Hannah are also now friends after they all quarantined together at Tyler’s home in Florida at the start of quarantine.)

Anyone who also follows Matt knows that he and Tyler are like brothers. Find out more about their friendship ahead.

How did Matt James and Tyler Cameron meet?

Are Matt and Tyler still roommates?

Yes, Matt and Tyler are still roommates. After they became close as teammates for Wake Forest University, the two moved to New York City, where they became roommates. In a September 2019 interview on the podcast “Bachelor Party,” Tyler explained why he would rather room with Matt than live alone. The two are also partners in the nonprofit ABC Food Tours.

“That’s my guy. I was gonna get a one-bedroom, but I think it’s important to surround yourself with people that are doing good things, and that’s my partner with ABC Food Tours,” he said at the time. “I’ve been living on his couch for a while now, and he hasn’t gotten sick of me.”

Tyler also revealed that Matt has also been a mentor to him since they first met in college. “That’s how he was in college with me. He was the older cool kid who took me under his wing,” Tyler said. “We’ve just been boys ever since. Super grateful for that friendship and what he’s shown me in the city.” 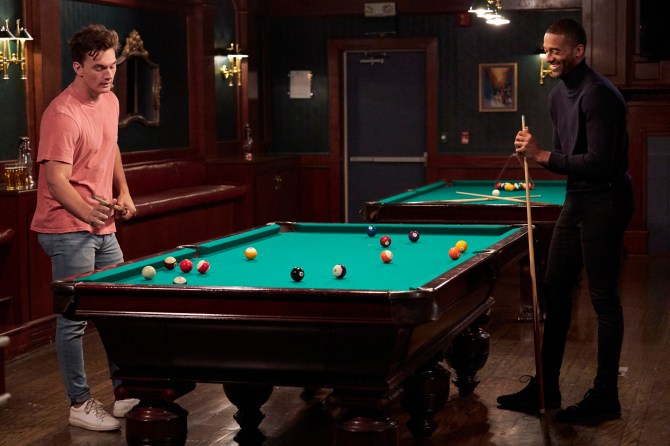 THE BACHELOR – Ò2506Ó Ð Halfway through MattÕs journey to find love, time is running out for the remaining women to strengthen their connection with the Bachelor. Emotions run high as rivals come face-to-face, cocktail parties are called off, and a group date gets unexpectedly competitive. Pieper and Matt take a break from the drama with a romantic carnival date complete with a performance by Temecula Road; and later, tensions are briefly lifted when MattÕs best friend and Bachelor Nation favorite Tyler Cameron stops by. But everything could change when former cast member Heather Martin (season 23) makes a surprise visit to the house, proving that the twists and turns just donÕt stop coming, on ÒThe Bachelor,Ó airing MONDAY, FEB. 8 (8:00-10:00 p.m. EST), on ABC. (ABC/Craig Sjodin)
TYLER CAMERON, MATT JAMES

How was Matt chosen as The Bachelor?

Well, we know that ABC chose Matt as the next Bachelor after they first cast him as a contestant on Clare’s season of The Bachelorette, but how did he apply in the first place? As Tyler explained in a 2019 interview on the podcast “The Viall Files,” he’s been campaigning for his best friend to be The Bachelor for a while.

“Everyone needs to apply Matt James for The Bachelorette. Maybe just skip that and go to The Bachelor,” he said at the time. “My goal is to get him on. He needs some convincing, so everybody get after him, get him convinced to go, and he’ll be a great guy for the show.”

Matt’s casting also came after a petition was created demanding that the Bachelor franchise cast its first Black Bachelor. Along with the first Black male lead, the petition also called on the franchise to hire more diversity both in front of and behind the camera. The petition was created after season 13 Bachelorette Rachel Lindsay, who was the franchise’s first Black Bachelorette, said that she would boycott the show if it didn’t take serious steps toward diversity.