Once upon a time, Jay Z and Beyoncé fell in love. But—when, exactly? At this point, it seems as though music’s preeminent power couple has been together forever, but there were actually several years where they kept the world at large guessing, denying their undying love while likely continuing to date under the rader (or—as under the radar as two famous people can be).

Baby Bey appeared on Jay’s protégé’s track “I Got That” in 2000. No one was the wiser about the budding power duo yet, but we have to ask—was the collab on this track how J+B 4-EVA first came came to be?

When Jay’s single “’03 Bonnie and Clyde” dropped in 2002, relationship rumors began a-flying. And though they wouldn’t officially cop to their relationship for many years, Jay told Vanity Fair that he and Bey were starting things up around the time they both posed for the magazine’s music issue (in the company of others) a year later. “We were just beginning to try to date each other,” he said in 2013.

Their success stems from starting out as friends, according to Beyoncé. “We were friends first for a year and a half before we went on any dates,” she told Oprah in an OWN interview. “We were on the phone for a year and a half, and that foundation is so important for a relationship. Just to have someone who you just like is so important, and someone [who] is honest.”

It was Oprah herself who apparently advised the young couple to keep their private life private. “I remember the first time you were on the Oprah show, I told you, ‘Don’t go around telling people who you’re dating,’” Oprah said during a televised interview with Beyoncé in 2013.

Next, it was Jay’s turn to guest on Bey’s track. He rapped on “Crazy in Love,” on B’s first solo album, Dangerously in Love, in 2003. Don’t forget the other duet from the pair on the album, “That’s How You Like It,” or the Jay Z lyrics from that track, “Young Hovah and the Letter B. How you like that, huh?” We like it, Jay!

The pair made their official red carpet debut at the MTV VMAs in 2004, about a year after they were “just beginning to try to date each other.” They wore matching outfits, but we’ll forgive that, because they were deeply embodying mid-2000s fashion and clearly living their best lives. 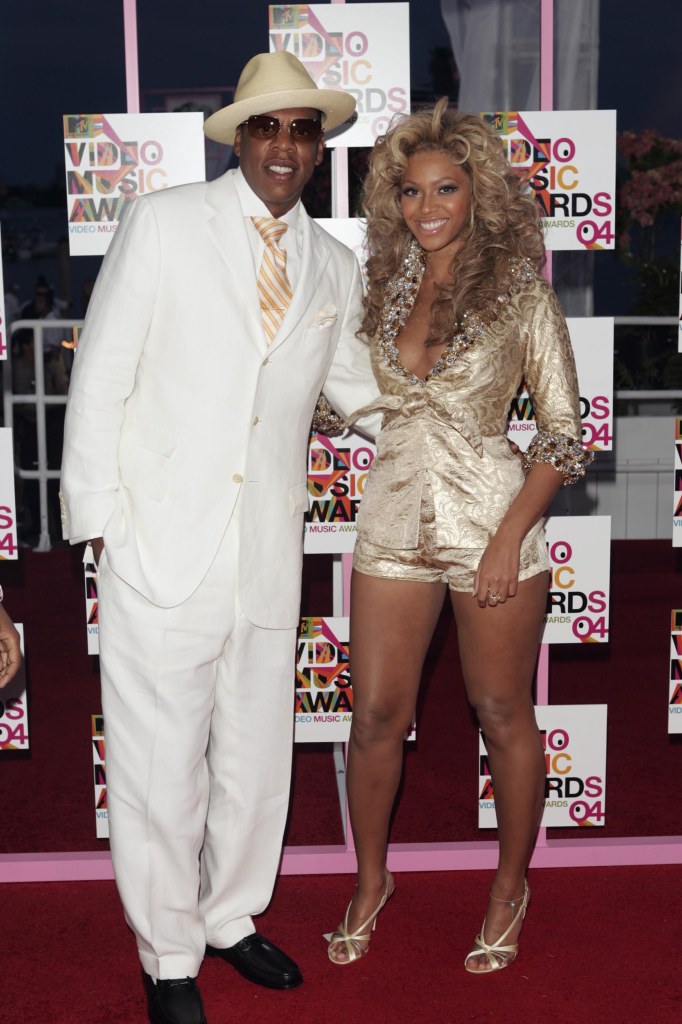 A few years passed. Jay and Bey performed together, collaborated on more music, dealt with cheating rumors, denied they were engaged. Then, in 2008, they married in a top-secret ceremony in front of “maybe 30” people, according to Jay. Their wedding was held on April 4 (4/4), because they are obsessed with the number 4.

“It was a very emotional wedding—lots of crying—and really very spiritual,” a source told People. It was held at Jay’s 13,5000-square-foot penthouse in New York City; instead of rings, they both tattooed the number 4 in Roman numerals on their ring fingers.

“There was no rush—no one expected me to run off and get married,” Bey told Seventeen. “I really don’t believe that you will love the same thing when you’re 20 as you do at 30. So that was my rule: Before the age of 25, I would never get married. I feel like you have to get to know yourself, know what you want, spend some time by yourself, and be proud of who you are before you can share that with someone else.”

Three years later, Bey and Jay made a big reveal on the red carpet at the MTV VMAs once again: Beyoncé was pregnant. Though she first just casually breezed along the carpet with a bump and without a statement (or a care in the world), she performed “Love on Top” later that night, kicking it off by saying, “Tonight I want you to stand up on your feet, I want you to feel the love that’s growing inside of me,” and concluding by dropping the mic, unbuttoning her sparkly blazer, and rubbing her expanding stomach. Now, that’s one way to announce a pregnancy.

And that, folks, is the story of how Bey and Jay fell in love, got married, and had a child, Blue Ivy. Babies #2 and #3 are on their way, and this epically dynamic duo have survived and thrived through it all—more infidelity rumors, some vow renewal action, incredible trips to far-flung locales, Lemonade‘s release and all that came with it, and, of course, that elevator incident.

The next chapter of their love story: The birth of the twins, whom the Beyhive theorize are boys. Time will tell—in the meantime, let’s all bask in the glow that is Bey and Jay’s love story. Ahh. It’s like lying in the sun.