Get ready for a dose of holiday nostalgia. There’s a Home Alone advent calendar that features 25 days of surprises inspired by classic moments from the beloved ’90s film.

The calendar, aptly titled Home Alone: The Official AAAAAAdvent Calendar, was created by Insight Editions—the brand behind other holiday collectibles and advent calendars for Friends, Marvel, Star Wars, Harry Potter, and more. This interactive calendar features original illustrations of the McAllister’s home, including 8-year-old Kevin’s bedroom and treehouse. Each new day on the calendar unveils a paper ornament, which are all inspired by fan-favorite moments from the film. Some highlights include the McCallister’s lawn jockey statue and burglar Harold “Harry” Lime’s gold tooth.

The Home Alone advent calendar also includes a special bonus gift. Fans will also receive a companion booklet, which highlights even more of Kevin’s secret tricks and pranks that he used to defend his home against burglars Harry and Marvin “Marv” Merchants, also known as The Wet Bandits. The best part? This advent calendar is reusable, which means Home Alone fans can use it for the holidays for years to come.

Home Alone: The Official AAAAAAdvent Calendar is available for pre-order on Amazon and will be released on October 5, 2021. But you might want to order sooner rather than later. Like other Insight Edition advent calendars, the Home Alone advent calendar is likely to sell out well before its official release, so we recommend that you pre-order this Home Alone holiday item now. 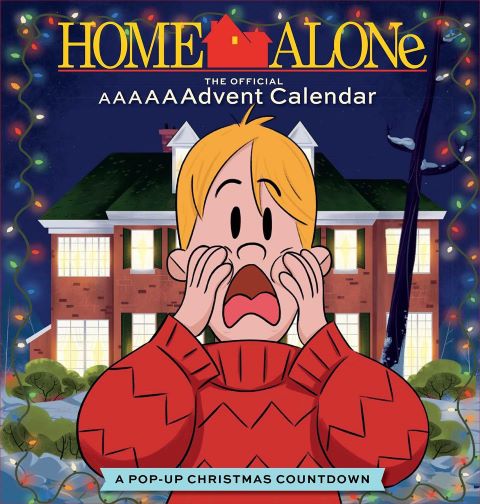 While you’re at it, get ready to stream Home Alone and its four sequels: 1992’s Home Alone 2: Lost in New York (which is the only sequel to feature the original cast), 1997’s Home Alone 3, 2002’s Home Alone 4: Taking Back the House and 2012’s Home Alone: The Holiday Heist. You may also be interested in finding out the best movies like Home Alone to stream for the holidays. If that sounds like you, make sure to check out our guide here, which features other nostalgic holiday films like A Christmas Story, The Santa Clause, and many more.

Home Alone: The Official AAAAAAdvent Calendar is available on Amazon.