Calling all Hocus Pocus fans, a.k.a. every person on the planet! After YEARS of fans begging for a sequel to the classic Halloween flick, Disney Plus announced details of a Hocus Pocus sequel. Pinch us, we must be dreaming. The sequel is still in its early stages, so you won’t be able to enjoy it in time for this year’s Halloween, but hey—it’s yet another reason to re-watch the original for the 19th time.

Disney+ is Disney’s new streaming service, set to launch on November 12. They recently released an enormously long list of all the Disney and Fox titles that will be available on the new service, and it’s impressive. They’ll be featuring titles as old as 1937’s Snow White! But they’re also making a bunch of exciting brand new projects just for Disney+. For example, a live-action Lady & The Tramp will premiere alongside the service’s launch, along with a Christmas movie called Noelle.

But Disney+ also has other upcoming projects in the works that aren’t on the official list just yet—such as, apparently, a sequel to Hocus Pocus. For the non-witches, the original Hocus Pocus (1993) starred Bette Midler, Sarah Jessica Parker, and Kathy Najimy as a trio of 17th-century witches who are resurrected 300 years later. The movie wasn’t a huge success at the time, but it’s since become a beloved cult classic, and it airs every single year on Disney Channel. 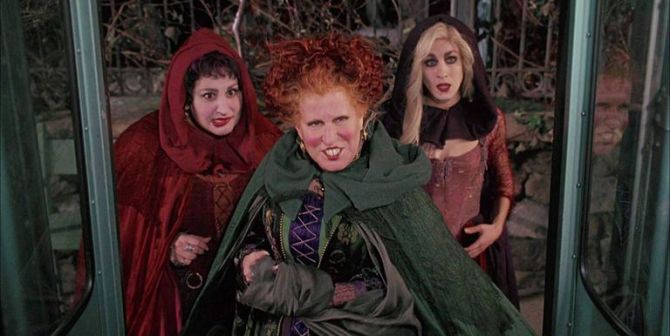 Variety reports that Disney+ has launched development of a sequel with Workaholics writer and co-producer Jen D’Angelo on board as the scriptwriter. The sequel is still in such early stages that there aren’t many other details about it just yet. Midler, Parker, and Najimy are not currently attached to the project. However, Disney+ is hoping that they’ll become involved. How amazing would that be?!?!

This wouldn’t be the first example of Disney+ successfully recruiting a star from an old classic to return for a sequel—Hilary Duff already signed on for a Lizzie McGuire remake that’s also in the works. Ah, the power of nostalgia!