Whatever your feelings about Hillary Clinton, there’s no arguing that while she may have lost the election, she was the clear winner in terms of dignity and class. As she took the stage the morning after her devastating and unforeseen loss, Clinton stood tall and spoke with clarity and compassion, conceding the race and offering a consoling vision of American healing and unity. When she walked away from the podium in her elegant purple and gray Ralph Lauren suit, head held high, it was a proud, albeit heartbreaking moment for women, as we said goodbye to the candidate we’d counted on shattering glass ceilings on all our behalves.

In celebration of getting this far—because yes, that in itself is a damned worthy victory, even if we wish it had gone down differently and happened decades earlier—we’re commemorating some of Hillary Clinton’s best quotes and classiest moments. She’s had many, and while she won’t get the chance to grace us with more as president (at least not in the next four years), we know there will be more memorable and dignified speeches and actions to come from Clinton.

In the meantime, here are several worth reliving.

When she won the U.S. presidential nomination and didn’t gloat for a second:

“America is once again at a moment of reckoning. Powerful forces are threatening to pull us apart. Bonds of trust and respect are fraying. And just as with our founders, there are no guarantees. It truly is up to us. We have to decide whether we will all work together so we can all rise together.” –Clinton at her DNC Speech, July 2016

When she owned the fact that she prepared for a presidential debate:

When she calmly refuted Trump’s accusation that she doesn’t have the temperament to be president:

“As soon as he travels to 112 countries and negotiates a peace deal, a cease fire… Or even spends 11 hours testifying in front of a congressional committee, he can talk to me about stamina.” –Clinton in the first presidential debate

When she wore purple to her concession speech as a nod to the merging of the Democratic and Republican parties: 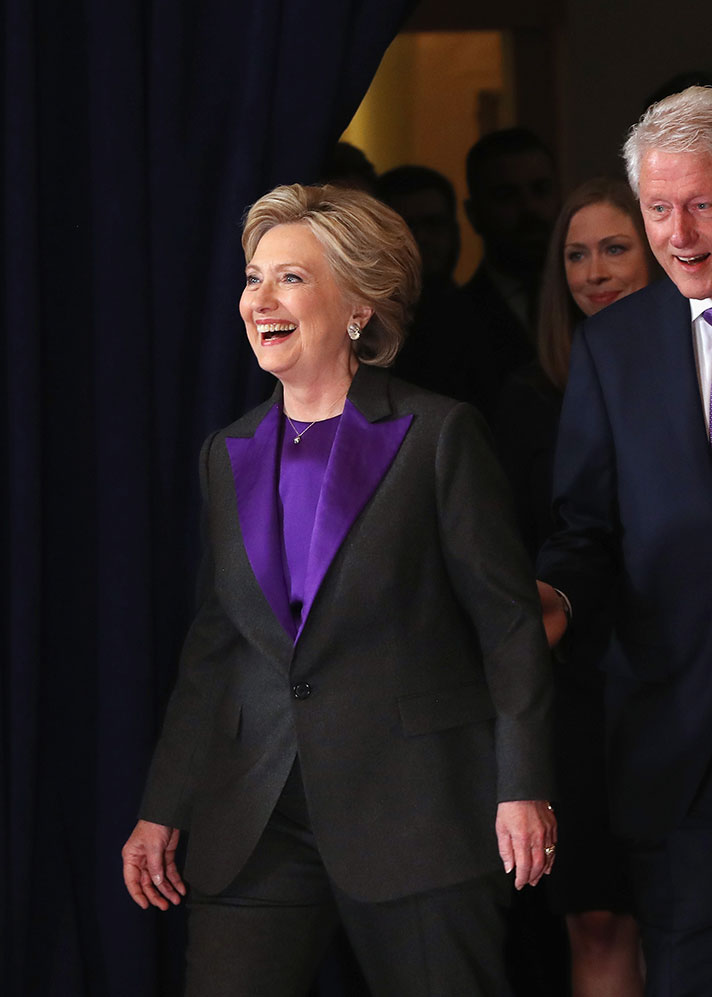 “For all the injustices in our past and our present, we have to believe that in the free exchange of ideas, justice will prevail over injustice, tolerance over intolerance and progress over reaction.” –Clinton in a UPenn commencement speech, May 17, 1993

When she defended a woman’s right to choose:

“We’ve come too far to have [the right to abortions] turn back now. Indeed, [Trump] said women should be punished, that there should be some form of punishment for women who obtain abortions. And I could just not be more opposed to that kind of thinking… This is one of the worst possible choices that any woman and her family has to make. I do not believe the government should be in it. I’ve been to countries where governments forced women to have abortions like they did in China, or force women to bear children like they used to do in Romania. I can tell you the government has no business in the decisions that women make with their families in accordance with their faith, with medical advice, and I will stand up for that right.” –Clinton in the final presidential debate.

When she stayed calm during the last debate, even when Trump interrupted her 37 times: 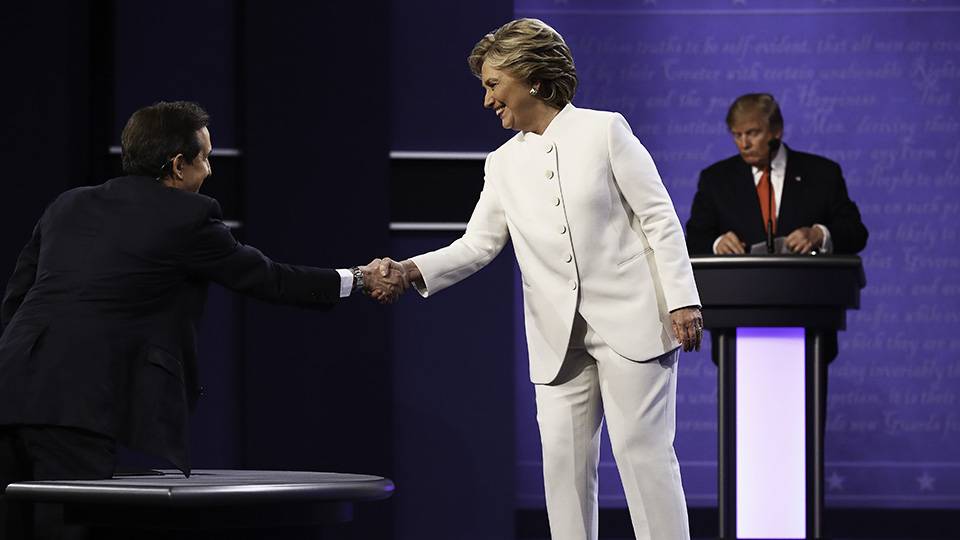 When she was brave enough to be vulnerable about Bill’s infidelity:

“This was the most devastating, shocking and hurtful experience of my life. I was furious and getting more so by the second. [H]is eyes filled with tears. He had betrayed the trust in our marriage and we both knew it might be an irreparable breach… I hadn’t decided whether to fight for my husband and my marriage, but I was resolved to fight for my President.” –Living History, Clinton’s 2006 memoir

When she told women in Beijing that women’s rights are human rights (and wore a killer ’90s suit):

When she fought for children’s right to education:

“We have to do things differently, but it should all be driven by the same commitment to try to make sure that we educate every child. That’s why I was a senator and voted for [NCLB], because I thought every child should matter and shouldn’t [be told], ‘You’re poor’ or, ‘You’ve got disabilities, so we are going to sweep you to the back; don’t show up on test day because we don’t want to mess up our scores.’ No! Every child should have the same opportunity; we’ve got to get back to basics.” –Clinton at an education roundtable at Kirkwood Community College in Monticello, Iowa, April 2015

When she dismissed the idea that Bill Clinton received fewer votes because she didn’t change her name to his:

When she respected the transfer of power without believing her work is done:

“Women are the largest untapped reservoir of talent in the world. It is past time for women to take their rightful place, side by side with men, in the rooms where the fates of peoples, where their children’s and grandchildren’s fates are decided.” –Clinton at the International Crisis Group’s awards ceremony, 2012

When she held her own during 11 hours of Benghazi grilling: 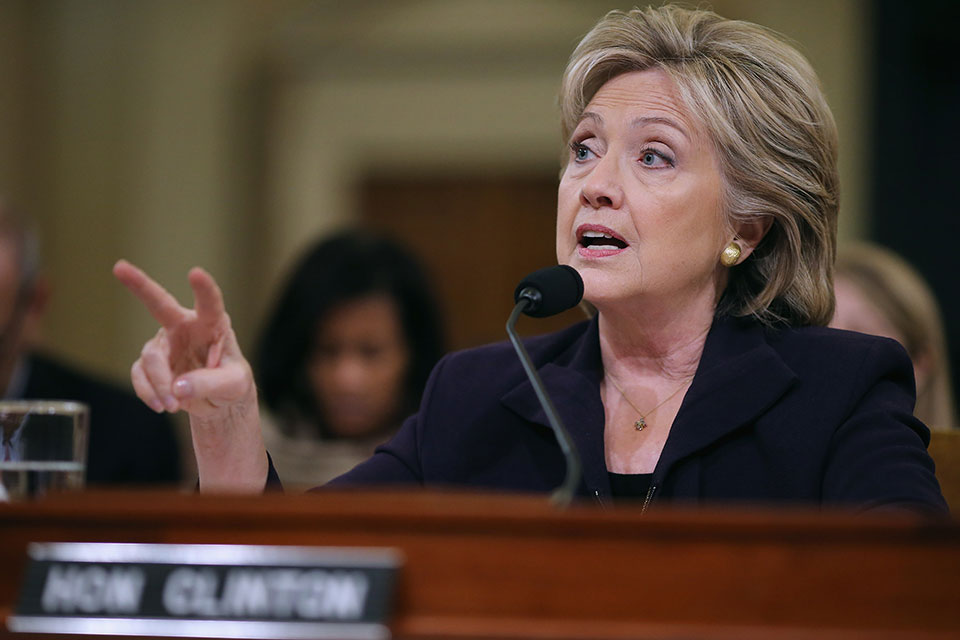 …And let haters know that she’s her own worst critic.

“It’s a very personally painful accusation. It has been rejected and disproved by non-partisan, dispassionate investigators but nevertheless having it continued to be bandied around is deeply distressing to me. I would imagine I’ve thought more about what happened than all of you put together. I’ve lost more sleep than all of you put together. I have been wracking my brain about what more could have been done or should have been done, and so when I took responsibility, I took it as a challenge and an obligation to make sure before I left the State Department that what we could learn as I’m sure my predecessors did after Beirut and after Nairobi and Dar es Salaam and after all of the attacks on our facilities, I think all of them, Republican and Democrat alike … said, ‘OK, what must we do better?'” –Clinton during Benghazi hearings, October 2015

When she found gratitude on one of the hardest days of her life:

“Finally, I am so grateful for our country and for all it has given to me. I count my blessings every single day that I am an American. And I still believe, as deeply as I ever have, that if we stand together and work together with respect for our differences, strengthen our convictions, and love for this nation, our best days are still ahead of us.” –Clinton in her presidential concession speech, November 9, 2016

When she Instagrammed love instead of hate: