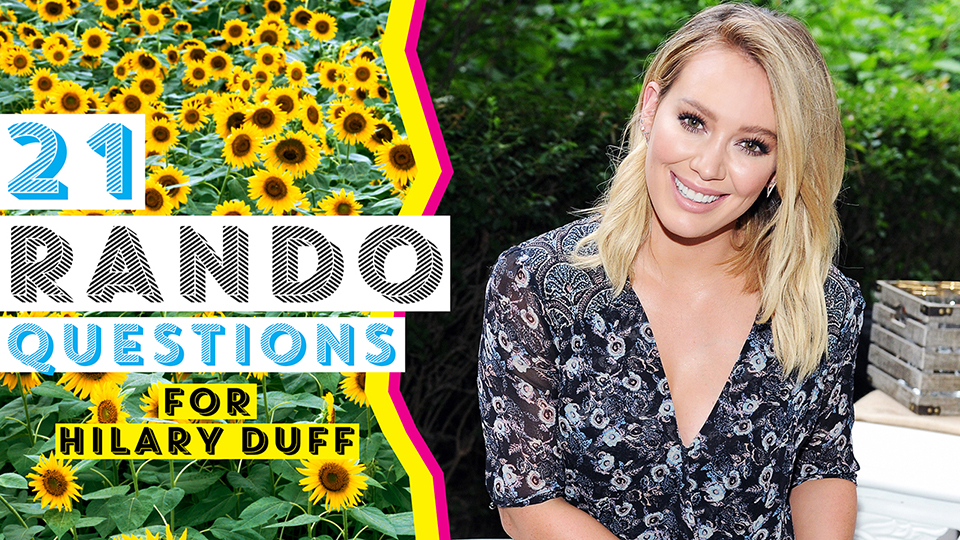 In general, interrupting a celebrity is not an auspicious start to an interview, but when I met Hilary Duff last month and we introduced ourselves in unison (“Hi, I’m Hilary!”), it was about as good an icebreaker as you could’ve asked for. Not that I needed to be worried—the 28-year-old actress was as warm and chatty as if we’d known each other for years—which on my end, at least, was certainly true, having followed her from “Lizzie McGuire” days through her box-office hits and flops (“A Cinderella Story” is always worth a rewatch in my book) and musical forays (“This Is What Dreams Are Made Of,” from the “Lizzie McGuire Movie,” might as well have been my eighth-grade soundtrack) all the way to her current role as striving twentysomething book publisher Kelsey Peters on TV Land’s “Younger,” a critical success that’s very much worth a weekend binge-watch.

Her latest gig, a partnership with Stella Artois for its “Host One to Remember” summer entertaining campaign, also makes me think that perhaps we were destined to be friends (Belgian beer and parties? My kinda girl.), although there’s no denying that Hil Duff has come a long way from her days as a teen idol. For one, she has a four-year-old son, Luca Cruz Comrie, and for another, she hosts the kind of soirées where beer is served in vintage bathtubs sourced from the Rose Bowl Flea Market. (Fancy!) Read on for her very grown-up idea of happiness, her go-to karaoke song, and the one thing you should never do if you find yourself sitting next to her on an airplane; and read the rest of our 21 Random Questions surveys here.

What would your last meal on earth be?
Oh my God, that’s so hard. Can I please have two? I would do a delicious grilled-cheese sandwich with tomato soup and then a really good pâ,té. I’m obsessed with pâté right now—it’s at like every restaurant in New York and I’m so excited about it. I used to think it was absolutely disgusting, and then two years ago I tried it, and now I love it. It’s just delicious.

What’s your most-used emoji?
So I go back in forth between the big-eye surprised face (😳) and the girl that’s like 💁 or the hand that’s painting her nails. But you kind of have to see in context how I use it. I’ll have a million things to do in one day and I’ll be like Oh, I’m just killing it right now, blah blah blah 💅. Or if it’s something really fancy, and I’m having a bougie dinner, I’ll be like Don’t worry about it 💅. It’s cheeky.

What’s your idea of happiness?
Balance. I think when I feel balanced with family and work and having enough time for myself, that is happiness to me. ’Cause those are all elements that mean everything to me, so when it’s just cruising along at a nice balanced pace, I think I feel my most happy.

What’s your idea of hell on earth?
Hmm, last night’s night shoot? We shot until 5 in the morning, and I had hair and makeup at 7:30, and I was like, I’m dying right now. I’m actually doing OK now, though. So maybe traffic on the 405 after you’ve had a huge day, or the subway in August with tons of people.

Who was your first celebrity crush?
Jonathan Taylor Thomas.

Wine, beer, or liquor?
Ooh, beer. Stella Artois actually is my favorite beer—I’m being completely honest. One hundred percent. I’m more of a wine person, but in the summer I love to drink beer—it’s refreshing. And bottles all the way. I’m more of a bottle person in general—I don’t really like cans.

What’s your favorite piece of clothing that you own?
Maybe my Saint Laurent leather jacket. I got it about a year and a half ago. It was a big purchase—a big scary purchase. But I love it, and I can wear it with anything. I feel like I’m going to be a 60-year-old lady still wearing it, you know?

What’s your favorite ice cream flavor?
You know what, I’ve always been a vanilla girl, but my little guy [son Luca], he loves sorbet. He loves tart things, and so he totally turned me into a sorbet person, ’cause usually when we go get ice cream, I’ll have some of his. There’s this place by my house called McConnell’s—it’s so delicious and they have this pink lemonade flavor. I only want him to have one scoop of ice cream, but theirs comes with two, so they split it for us, and now I’m obsessed with it.

You change up your hair a lot. Do you do it out of boredom, or after a big life change?
It’s never a big life change. It’s always out of boredom. Sometimes, when I’m on the show, I’m there for three months and I have to look the same, so it just gets monotonous to me. Last season I just cut all my hair off, and it was the shortest I’ve ever had it—I couldn’t even put it in a ponytail. I was devastated for, like, three weeks, and then we started calling it the angry pony, because it would just stick straight out—there was no little fall or anything cute to it. But I like the short hair, and I just get bored and I want to try new things, so right now I’m trying to grow my bangs out desperately so it’s all one length. I’m eating hair vitamins like candy—I’m just popping them all day long. I’m not planning on any more candy tones, but who knows? Sometimes I just get an itch. But it’s been purple and pink and green—I don’t know what else I could choose.

What’s your favorite ’80s song?
Ooh, did that Bonnie Raitt song come out in the ’80s? “Something to Talk About”? ’Cause I really like to karaoke to that song. [Ed note: 1991—close enough!] In L.A. there’s this place called the Blind Dragon that I like to go to, but I haven’t found one here.

What’s your greatest virtue or best characteristic?
I think I’m really friendly and warm. All my friends, I’ve had forever, and we have really great relationships.

How do you take your coffee?
It depends if I’m being good or not. I can drink black coffee, but I tend to like it with a little milk and a Sugar in the Raw. I also love Mexican lattés. I don’t know how to make one, but they have them at Urth Caffé in L.A. They’re so tasty, I want one right now.

What’s something you find really annoying?
People that file their nails in public. I sat next to this lady on the plane going back from San Francisco to L.A, and she filed her nails the entire plane ride. I kept looking at her like, “You’re going to stop that soon, right?” Like, trying to give hints. There was dust everywhere—it was so gross. Fingernails are body waste. I don’t want to breathe that in.

What’s your favorite movie of all time?
I’m not a movie buff at all. Sometimes we’re on set and like everyone is talking like, “You haven’t seen that one? You haven’t seen that one?” and I feel really dumb. But one of my favorite movies of all time is called “Drop Dead Gorgeous,” and my sister and I have watched it probably 50 times. Not many people saw that movie. We feel like it’s our special thing. I’m a sucker for rom-coms, so every Christmas I watch “The Holiday” probably five times. I’m a huge Nancy Meyers fan.

What was your first concert?
Spice Girls!

Did you watch “Sex and City”? And if so, do you think Carrie should have ended up with Aidan or Big?
I did watch a ton of “Sex and the City,” but it came out when I was on tour, so I didn’t get to watch it every week when a new episode would come out, so I haven’t seen it in order enough to recap story lines, but I’ve seen almost every episode. I always liked Aidan—I get her relationship with Big, but I was always an Aidan fan. I forget what went down with them, though. I need to go recap.