Justice for Lizzie! Hilary Duff hinted at Disney+’s reason for the Lizzie McGuire reboot’s cancellation, and it has to do with the service’s outdated views. Someone had to say it! The Younger actress, 32, took to her Instagram Story on Wednesday, February 26, to suggest that the Lizzie McGuire reboot was put on an indefinite hiatus because it wasn’t “family friendly.”

On her Instagram Story, Duff shared a screenshot of an article about Disney+’s Love, Simon TV show, titled Love, Victor, which will now stream on Hulu after Disney+ cancelled the series because it didn’t fit with the service’s “family friendly” content, according to Variety.  In her post, Duff circled the article’s headline and wrote, “Sounds familiar…”

Variety reported in January that Lizzie Mcguire’s creator, Terri Minsky—who created the Disney Channel series in 2001—exited the reboot as a show runner for an unknown reason. A spokesperson for Disney told Variety at the time, “Fans have a sentimental attachment to ‘Lizzie McGuire’ and high expectations for a new series. After filming two episodes, we concluded that we need to move in a different creative direction and are putting a new lens on the show.” 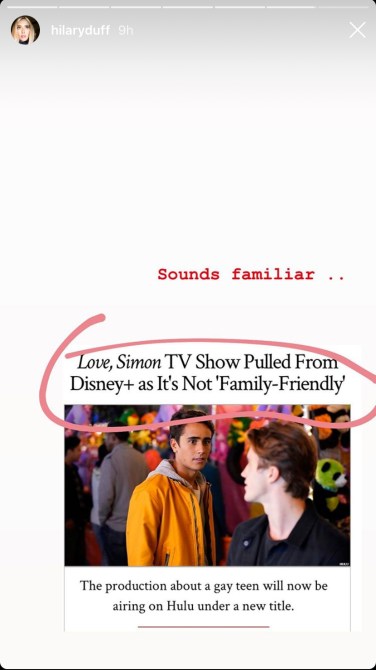 No new show runner has been announced and the reboot has been put on an indefinite hiatus. Production for the reboot started in November 2019 after it was announced in August last year. The reboot was said to explore a grown-up Lizzie as she navigates the ups and downs of adulthood, new and old friends and her 13-year-old animated self in the months before her 30th birthday.

Duff became a household name in 2001 after the premiere of Lizzie McGuire on the Disney Channel. The show went on for three years before its end in 2004. It’s unclear if a Lizzie McGuire reboot will ever be a reality, but from the looks of it, we don’t want Disney+ to touch our beloved Lizzie.

Hulu, please come save this show too.