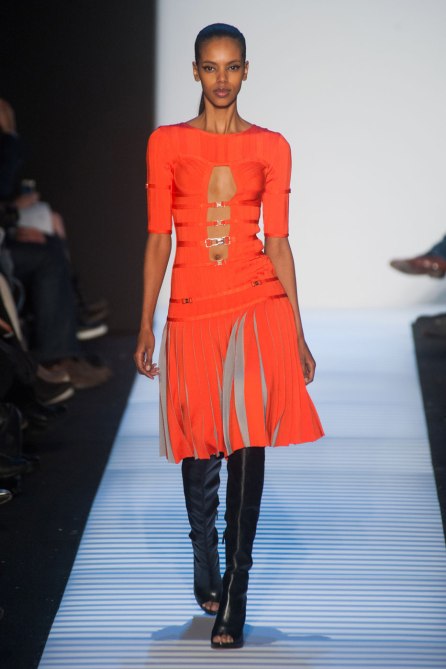 You may have heard that New York Fashion Week is underway right now and in New York City. Most style obsessives (myself heartily included) celebrate this momentous occasion by taking to the web to scroll through runway galleries, compulsively check Instagram for up-to-the-minute details, and try to decide which Anna Wintour gif is the most expressionless. While I admit to doing all that and more in an effort to get my virtual style fix, this Fashion Week has been a tiny bit more reality-based for me, and I couldn’t be more amped.

The Back Story: You see, I’ve been fluttering around the fashion industry, intern-style, for a few years now. I thought I had tried my hand at almost everything, from picking up bagfuls of designer shoes to meticulously steaming ball gowns on set. But, despite all that, I’d never been to the Tents at Mercedes Benz Fashion Week. At least, not until this past Saturday, when I attended my first-ever fashion show for StyleCaster—where I recently started working as an intern, or Junior Team Member.

An editor realizes that she’s over-scheduled for shows on Saturday, and kindly offers me her ticket to Herve Leger. I’ve probably never been more psyched, except for maybe the time I went to Disney World when I was eight. I gleefully accept, visions of Kardashians in clingy bandage dresses dancing in my head.

10 am: The show is scheduled for 2 p.m., so I start getting ready at ten, natch. Because I commute from outside the city, I had approximately three pieces of clothing to turn into a fashion-week worthy outfit. I knew I was never going to be street-style bait—and I was more than okay with that fact—but I didn’t want to embarrass myself either.

I stuck with a monochrome look because a) wearing black on black rarely gets you into trouble, and b) that was the only color I brought with me. Here are two snaps of me, snapped by my long-suffering boyfriend before I headed out at noon. For a 2 o’clock show. 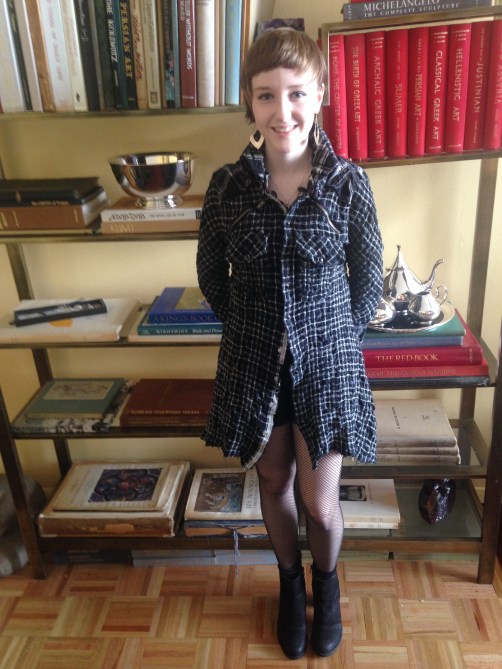 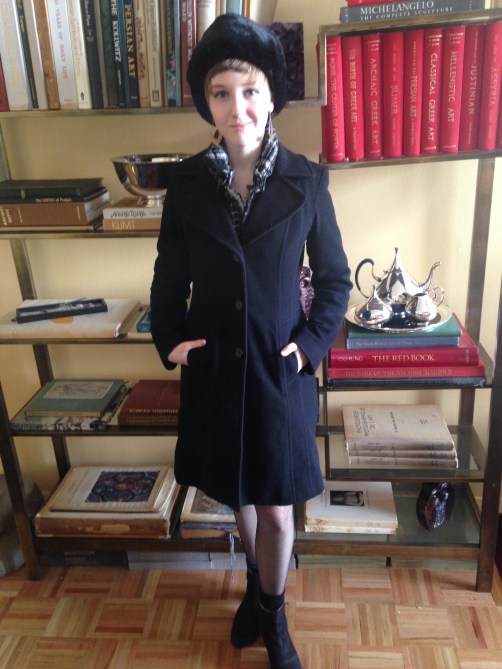 1 pm: I arrive at Lincoln Center, fashionably one hour early. I pause in Lincoln Center Plaza long enough to snap a picture of an extremely glamorous drag queen, and get my photo taken be a street-style photographer (!) despite the language barrier between us. I have no idea where on the internet this picture is, or even if it’s on the internet, because I tragically have no ear for Mandarin. 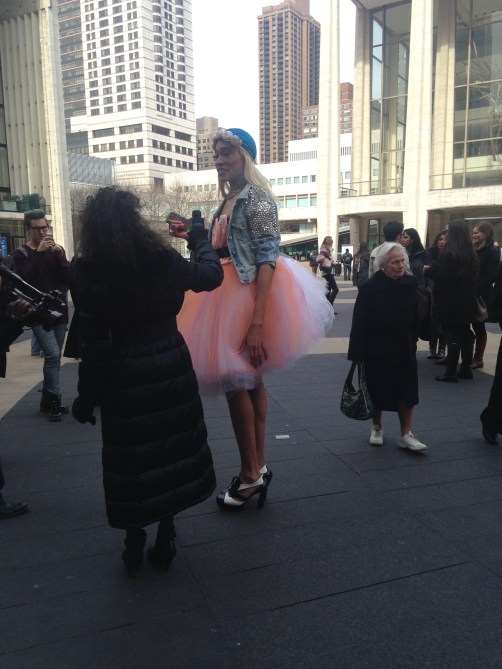 1:15 pm: I head inside, past several levels of security, before being politely turned away by the staff outside of the Herve Leger show. Apparently, they can’t seat anyone forty-five minutes before the show. Oops, my fashion week naivete is showing. Instead, I mill around the waiting area for a while, surreptitiously scanning for celebs, and taking pictures of ladies with bare legs, despite the sub-freezing temperatures. It’s pretty dark inside the tents, with a WiFi area and a cafe and two Mercedes-Benz on display.

1:45 pm: The growing crowd of ticket-holders is starting to get let through. During the bottle-neck at the security gate, I’m sandwiched between two avid, Herve-clad girls who are chattering in Russian, and then the whole crowd is shepherded into two holding pens to wait until we are admitted to the actual show.

2:00 pm: Still waiting outside the doors.

2:15 pm: Still waiting,but mildly entertained as several members of the crowd succumb to mass-hysteria, and attempt to sweep past the final security guard with attitude alone. As it turns out, only VIPs are allowed to do that. My Herve-superfan friends from earlier duck the rope and literally attempt to make a run for it, but are knocked back by an unamused guard.

2:27: A guy tells people that they can move forward. I bond with the girl sitting next to me as we both clamber over the backs of chairs in front of us. A girl sitting behind me taps me on the back, and asks to take my picture, because she’s doing PR for In God We Trust, the label that made my earrings. I feel extremely fancy, and we make Instagram contact.

2:30: The show starts! All the models look like futuristic Bond Girls. My program for the event says that the designs depict the relationship between natural textures and technological advances, and I can definitely see it. I spot Manon Leloup, and Grace Mahary, and they look stellar.

The models are all wearing shiny thigh-high boots, which I immediately add to my mental “want” list, despite their unseasonable peep-toe (and sky-high price tag). The classic Herve Leger silhouette is looking more bondage than bandage, with all the models wrapped in zillions of black leather straps that describe the contours of their outfits.

Some of the looks are more A-line than Herve Leger normally shows, and the colors are all shiny blacks, greys, and blues with a surprising amount of fringe, and the occasional orange-boned corset to break things up. Every other dress is slit up to here or cut down to there, and it all looks amazing. 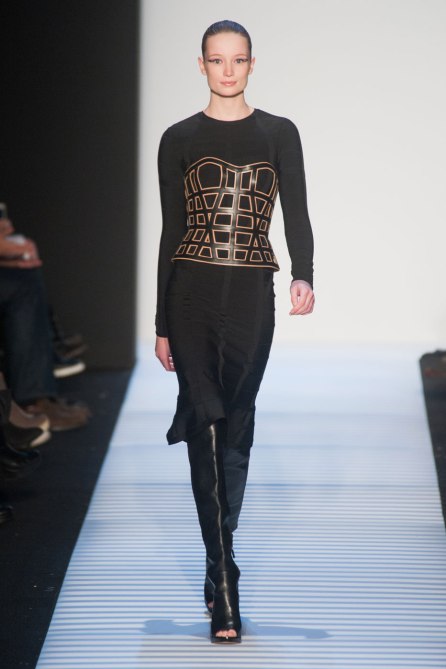 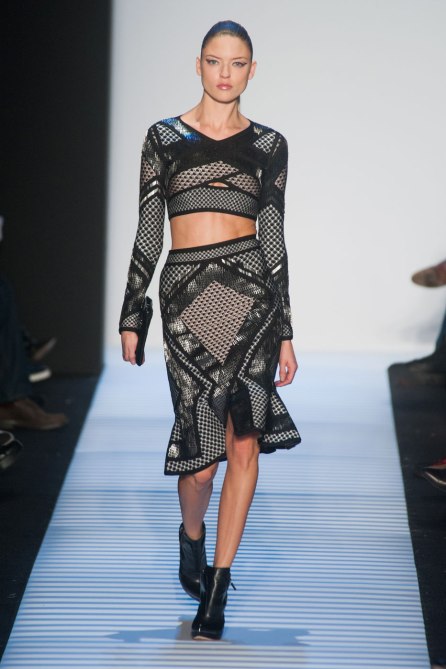 2:50: Designer Max Azria and Creative Director Lubov Azria—the power couple behind the label—appear at the end of the runway. The crowd goes wild! 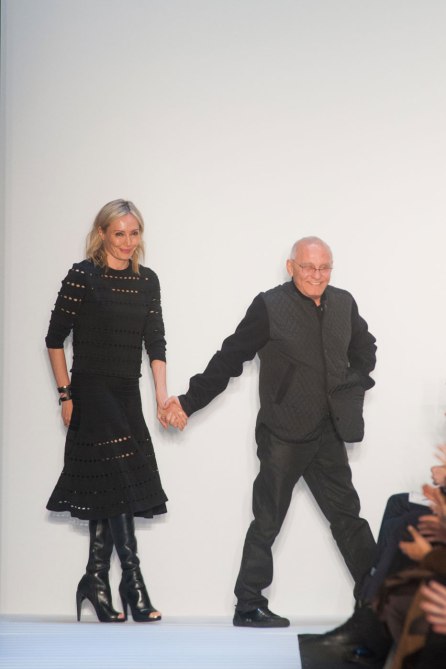 2:51: Everyone starts gathering their stuff and booking out. I don’t recognize anyone seated in the front-row, but WWD reported that Jamie Chung was in the front row, as was Zoey Deutch of “Vampire Academy.” I can tell you that there was nary a Kardashian to be found (oh right, they only wear clothes from Paris now, I forgot.)

3:00: Herve Leger is over, and people are arriving for the next big event. Mara Hoffman is happening next door, and the plaza is considerably more crowded than when I arrived. Like a hyena scavenging from lions, I sneak up next to the street style photogs, and snap a few pictures of the girls that are attracting the most attention. 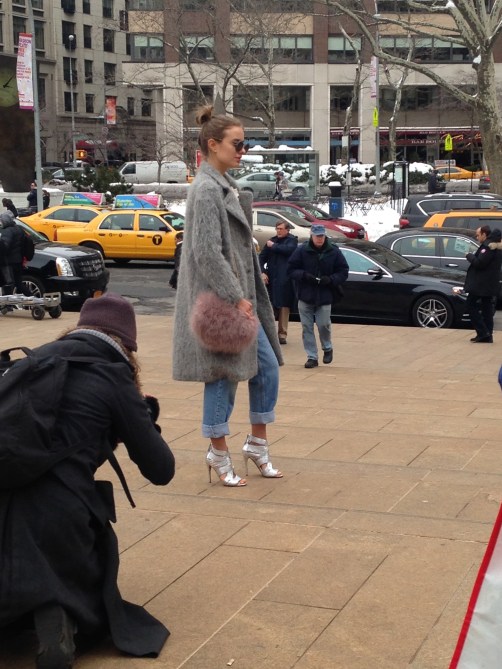 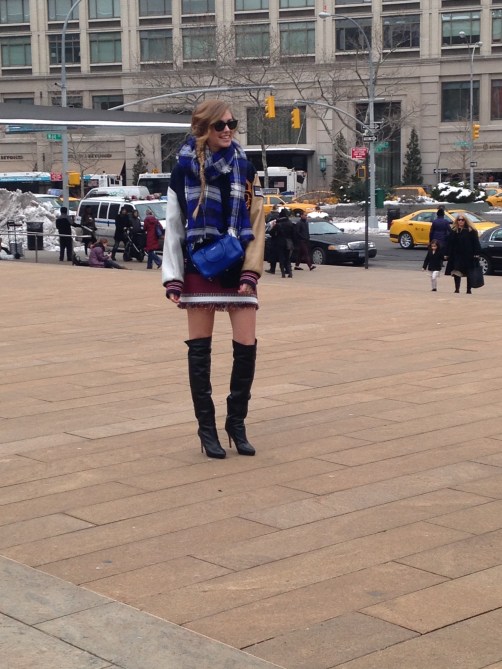 3:15: I’m in the subway, waiting for the 1 train, and I spot two of the models who walked in show chatting on the platform. They’re dressed like regular New Yorkers now, except for the tell-tale streak of blue hair in their ponytails left over from the show. I sneak a quick picture of one of them, and hop on the train as it arrives. With that, my first fashion-show experience is officially over. 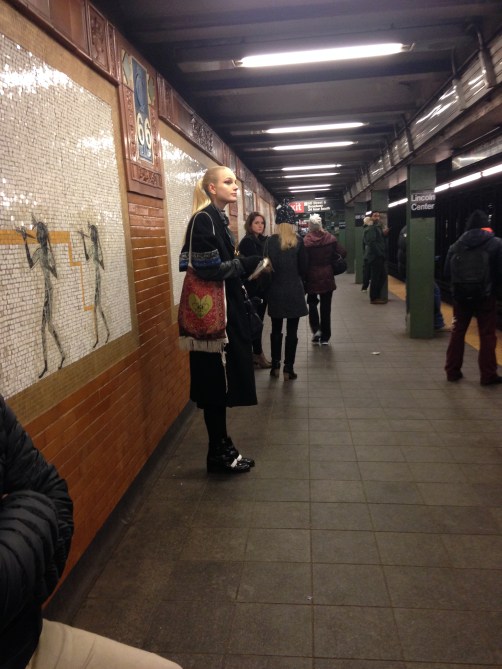 The Takeaway: I can safely say that my idea of what a fashion show is like was definitely more romanticized than the reality. I had a vague idea that fashion shows were mostly just thumping music and celebs in the front row. While those are definitely aspects of the experience, the process of attending a fashion show mostly has to do with waiting around at security checkpoints, fighting through manic crowds, and stressing about your outfit.

Ultimately, I learned that there is a ton of semi-dull logistical stuff that supports the drama of the runway, but—if you love fashion—it’s worth braving, at least a few times.