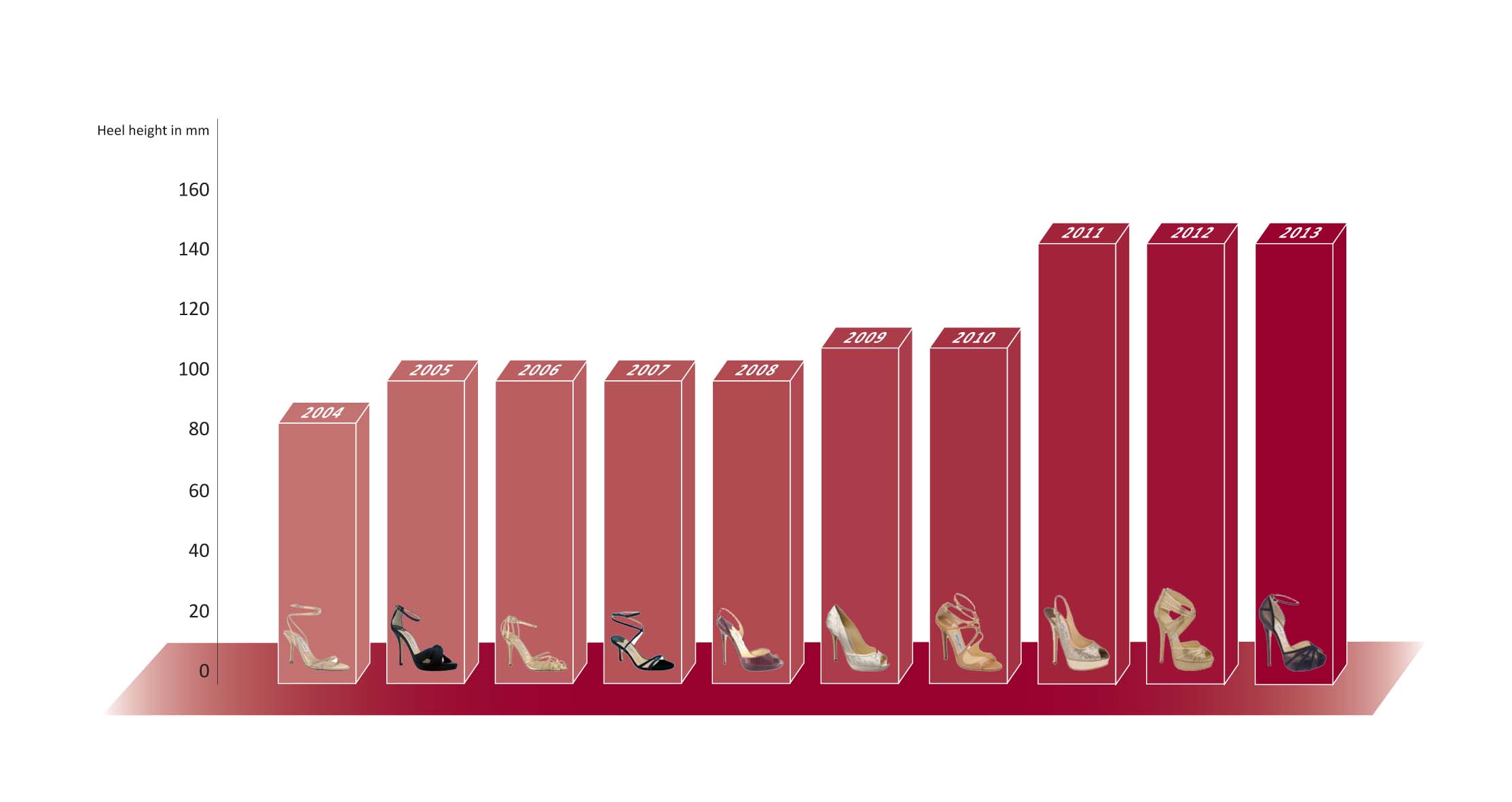 We received a press release today from none other than beloved shoe brand Jimmy Choo, which appropriately highlighted some red carpet shoe trends during the past decade. Since it’s likely that no other fashion brand has logged more time on the red carpet than the luxury label—whose footwear first made its debut in 1999 at the Academy Awards on Cate Blanchett—they know a thing or two about the subject.

Interestingly, though not surprisingly, the release stated that heel heights have risen at a steady pace over the past ten years. In 2004, the Choo that logged the most time on the red carpet was the “Smooth,” a skinny single-sole heel that measured 85mm (about 3.3 inches—a kitten heel by today’s standards) with wrap-around ankle straps worn by Kate Winslet and Renee Zellwegger.

Today’s Choo of choice is the “Kalpa” style, which has been worn by such stars as Beyoncé, Anne Hathaway, Naomi Watts, Amanda Seyfried and Alicia Keys, and clocks in with a heel height of 145 mm—just shy of six inches—and a hefty platform.

It’s not only Jimmy Choo shoes that have a seen a major rise of heel heights—for the last eight years or so, it seemed every shoe brand across every price point was hawking precariously high heels bolstered by equally major platforms—until now, that is, as the fashion industry seemed to have decided that it’s had enough of teetering, and officially declared 2013 the year of chic comfort (aka, the year we revisit the early aughts with our footwear). That’s why you may have noticed that pretty much every retailer from Zara to Barneys is showcasing specific types of shoes that were ubiquitous at the start of the millenium: platform-free pumps with relatively low—think 3.5 inches and under—heels.

“The best-selling Jimmy Choo style now is a classic single sole pointy-toe pump, and there has been a move away from platforms,” said Jimmy Choo Creative Director Sandra Choi, solidifying the fact that heel heights may have reached their peak—probably because, topping out at six inches, there’s nowhere to feasibly go but down.

Have a look at the graphic above to see the steady rise of heel heights on the most popular Jimmy Choo styles throughout the years and let us know: Are you psyched that heel heights seem to be coming down?