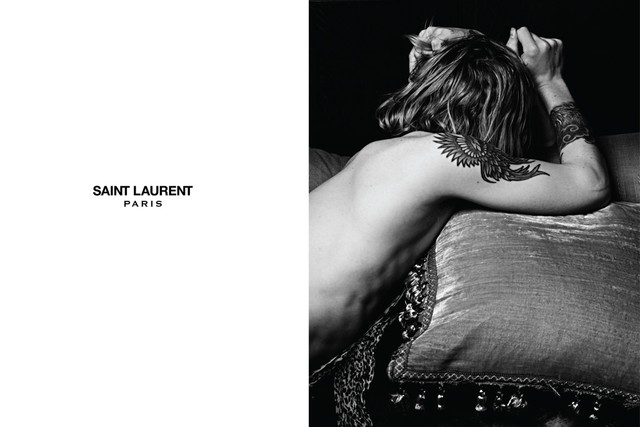 One of the most buzzed about fashion moves in recent years is Hedi Slimane‘s arrival at legendary label Yves Saint Laurent, which he promptly (and somewhat controversially) renamed Saint Laurent Paris. The fashion industry was up in arms, with many demanding that we see actual designs from Slimane before he rebrands an iconic label. And now, we’re starting we finally have (sort of) a look.

In an ad appearing in Vogue Hommes Japan today, Christopher Owens (who was the lead singer of the now defunct indie fave Girls) appears sprawled over a chaise in his tattooed, filthy haired glory. WWD states that this is the first of fifteen images from the campaign — and that the others will actually feature more Saint Laurent fashions.

Well, obviously this is a bit of a letdown because we’re still unclear as to how Slimane will reinvent the label — but we suppose a sexy rock edge never goes out of style.

What do you think of Hedi Slimane’s first Saint Laurent Paris ad?