Now that she’s married a woman, Selling Sunset fans want to know about Heather Rae Young’s net worth and how it compares to her husband, Tarek El Moussa.

Heather—who was born on September 16, 1987, in Anaheim, California—is a cast member on Netflix’s Selling Sunset and an agent at the Los Angeles-based high-end, real-estate brokerage firm, The Oppenheim Group. Prior to her career as a real estate agent, Heather was a model and actress. In February 2010, she was Playboy’s Playmate of the Month. She’s also starred in eight movies, including 2014’s Love in the Time of Monsters. In October 2021, Heather married fellow real estate agent and house flipper, Tarek El Moussa, who stars on HGTV’s Flip or Flop.

In an interview with STYLECASTER in 2020, Heather talked about how she became a part of Selling Sunset. “We weren’t cast on the show. I was already a part of The Oppenheim Group and had been for five years when we started filming. We were already a real estate team,” she said at the time “Obviously, a lot of thoughts go through your head. You’re like, ‘OK. Wow. Exciting! We’re going to be filming a reality show.’ We get to show people these beautiful properties and an insight into our lives. We get to work in one of the best places for real estate in the world and see gorgeous, multi-million-dollar homes in the Hollywood Hills.” She continued, “But obviously, we’re putting our whole lives out there. We’re giving you our hearts, our souls, our personal relationships. You have to sit back and think, ‘Wow. Am I ready for this?’ Even though we all said, ‘Yes. We’re ready.’ You’re really not ready. There are cameras on you hours and hours throughout the day, and we don’t control what happens in the editing room. We’re like, ‘OK! Take it from here, you guys.’ We don’t see it until basically you guys see it.”

So what is Heather Rae Young’s net worth? Read on for what we know about how much she makes on Selling Sunset and how her net worth compares to her husband, Tarek El Moussa. 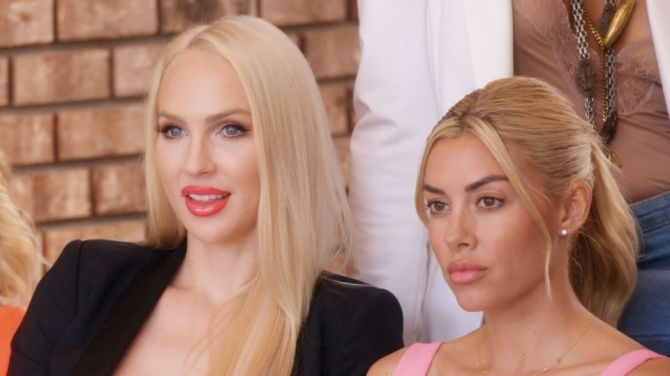 How much does Heather Rae Young make on Selling Sunset? Heather has been a cast member on Selling Sunset—a Netflix reality TV show that follows a group of agents at the Oppenheim Group, a high-end real estate brokerage firm in Los Angeles—since season 1 in March 2019. Heather joined the Oppenheim Group in February 2015, according to her Linkedin, and is also a member of the National Association of Realtors.

In her bio on the Oppenheim Group’s website, Heather described her “high net worth clientele” as “celebrities, athletes and musicians.” “A Southern California native, Heather Young began her career as a professional model at the age of 18. Her strong work-ethic and dedication quickly catapulted her to international success, with many highly-publicized and well-known brands,” her bio reads. “This ultimately built the foundation of her impressive achievements as a well-respected Realtor. Heather swiftly made her mark in the real estate industry, specializing in high profile and high net-worth clientele, including many celebrities, athletes, and musicians.”

Her bio continues, “Her professional demeanor puts her clients at ease, knowing that they always come first. Heather’s interests don’t end there—she is very passionate about fitness and healthy eating, as well as animal rights. When you don’t see her showing million-dollar estates, you can likely find her running down the coastline’s sandy beaches with her three dogs, Sebastian, Baxter, and Brandy.”

As for how much she makes on Selling Sunset, Heather’s salary from the show is unclear. Regardless of her salary, Heather makes a good amount from the commission she earns as an Oppenheim Group agent selling multi-million-dollar homes. According to Heart UK, the commission for real estate agents typically range from three to six percent. Heather’s Selling Sunset co-star, Davina Potratz, explained that that amount is then split with the brokerage. According to Davina, agents take 75 percent of the commission, while brokers take 25 percent. “The salespeople have to work underneath the broker license and the brokers also carry more responsibility, if anything goes wrong or if anyone gets sued the broker is responsible,” she said. “But if you get, say, 2.5 per cent commission of the purchase price then that share goes to the broker and then the salesperson who did the transaction, if it was their client, they have a split with the broker.”

How much is Heather Rae Young’s net worth?

So what is Heather Rae Young’s net worth? Well, according to Celebrity Net Worth, Heather is worth $3 million, which includes the commission she makes as a high-end real-estate agent at the Oppenheim Group, as well as her salary from Selling Sunset. Heather Rae Young’s net worth also includes the money she makes from Instagram. According to Influencer Marketing Hub, Heather makes around $4,628 per post. As of November 2021, Heather has 1.8 million Instagram followers. She’s also been sponsored by brands like Vault Lighting and Tru Supplements. As for her husband, Tarek El Moussa, the Flip or Flop star is worth $15 million, according to Celebrity Net Worth. Compared to her Selling Sunset co-stars, Heather has the third highest net worth, next to Chrishell Stause (who is worth $5 million) and Jason and Brett Oppenheim (who are worth $50 million each), according to Women’s Health.

Selling Sunset is available to stream on Netflix.