Yes, an ice-cold margarita (or two) can be a refreshing treat in the heat of summer, but most cocktails are huge sugar bombs, thanks to ingredients like simple syrup, juice, and sweet liqueurs. But don’t worry; “healthy” cocktails do exist, and it is possible to take part in the occasional imbibing guilt-free.

To prove it, we’ve rounded up 20 drinks that won’t totally ruin your diet this summer—because not all cocktails are nutritional landmines. We even included some tips on how to make your go-to cocktail even healthier, so you don’t have to ditch it completely.

But before we get to the list, remember: Everything in moderation. A few glasses of brut Champagne is OK, a few bottles is not.

The antioxidants found in red wine, such as flavonoids and a substance called resveratrol, have heart-healthy benefits, so feel free to enjoy a glass or two.

Red wine may have the health benefits, but white wines tend to be slightly lower in calories. Light whites, such as Riesling and Pinot Grigio, have fewer calories than those with higher alcohol content, such as Chardonnay and Sauvignon Blanc.

The problem with these—though made with healthy tomato juice—is that pre-made mixes are typically packed with salt and additives. Try ditching the pre-bottled stuff and use no sugar-added, low-sodium tomato juice instead. From there, add in your fixings, like one shot of vodka, a squeeze lemon, a teaspoon of horseradish, and a nice, big celery stalk.

Dark and Stormy (That’s More Like a Light and Stormy)

This classic cocktail is made with fresh rum and ginger beer, which is packed with artificial sweeteners. Instead, mix 1 shot of light rum with 2 shots of sugar-free ginger ale, and serve over ice.

Sangria is wine-based, but it’s also packed with sugar, brandy and, often, ginger ale. To cut major calories, use white wine, tons of chopped fruit (we like apples, strawberries, pears, and peaches) and seltzer. You won’t miss the sweet stuff at all.

This lemonade-like cocktail is typically mixed with gin, sugar, lemon juice, and club soda. To lighten it up, use 1 shot of gin, fresh-squeezed lemon juice, and top with seltzer. No penalties if you don’t have a Collins glass .

This creamy dessert drink is packed with fat and calories, but it’s possible to still get the taste using lighter ingredients. Instead of heavy cream or half-and-half, combine chilled coffee with skim milk. From there, add a shot of vodka and lots of ice. Yum!

Most margaritas are loaded with calories, as they usually include sugar-filled liqueurs and mixers, like triple sec or simple syrup. Instead, combine tequila with fresh lime juice. If that’s too strong, pour in a dash of orange liqueur, but only a dash, as that’s where the calories are.

Overall, orange juice and Champagne aren’t the worst ingredients, but you can still cut calories by using only fresh-squeezed OJ and replace half the bubbly with seltzer.

Despite its reputation, this super-thick Irish beer isn’t as caloric as you’d think. According to Men’s Fitness, a serving of the stout brew clocks in at just 126 calories, which is 19 less than a Budweiser and 24 less than a Heineken. Guinness also contains just under 10 carbs, which is less than something like Sam Adams Boston Lager (18 carbs per serving). Why? It’s partly due to Guinness’ low alcohol content.

MORE: Summer Foods and Drinks That’ll Give Your Metabolism a Major Boost

It might be a bit on the snoozy size, but this clean cocktail is a sure bet when it comes to low-cal imbibing. Spice it up with lots of fresh lemon, lime, or even sliced cucumber.

Mojito with Honey, Not Syrup

Mojitos are typically loaded with simple syrup, which is quite easy to replace. Muddle a sliced lime with fresh mint leaves, and add rum, club soda and a half-teaspoon of honey for a touch of sweetness sans extra calories.

All sparking wines have sugar—it’s required for fermentation—but there are measures you can take to cut calories. According to Shape, it pays to stick with Brut nature varieties of Champagne (“brut” signifies that little extra sugar has been added), cava (Spain’s sparking wine), and sparking wine from the U.S, as these regions have stricter rules about added sugar than Italy, the home of Prosecco. Shape pointed out that a five-ounce glass of brut nature bubbly has about 120 calories, compared to around 175 for a non-brut variety.

You don’t have to sacrifice flavor for health: According to Gizmodo, Bourbon generally ranges between 97 and 110 calories per 1.5 ounces, and it’s packed with complex flavors unlike, say, vodka.

This zesty drink features a bottle or can of light lager mixed with lots of low-cal extras like fresh lime, Worcestershire sauce, hot sauce, pepper, sea salt, and ice.

Unlike eggnog, this classic winter cocktail won’t pack on the pounds, and it’ll keep you toasty. Combine 1 to 2 ounces of scotch, whiskey, or bourbon with hot water, a little honey, lemon juice, and either cloves, a cinnamon stick or star anise.

Martini culture has been muddled with high-cal impostors like Cosmos, apple martinis, and—the biggest offender—creamy dessert martinis. Take a cue from “Mad Men” and enjoy a classic vodka or gin martini, which is mixed with dry vermouth and include no fattening additives. Those bleu cheese-stuffed olives, however, are another story.

A refreshing gin and tonic might not seem terribly bad for you, but tonic water is made with high fructose corn syrup or sugar and clocks in at over 125 calories per can or small bottle. Instead, try mixing gin with club soda and only adding a small splash of tonic for fizzy sweetness.

Everyone knows that piña coladas  are a one-way ticket to Calorieville, thanks to the use of lots of rum and that super-thick cream of coconut. However, there are ways to still get the fruity flavor without all the guilt. One way: Replace cream of coconut with coconut milk or even coconut water. From there, add 1 shot of rum and fresh pineapple juice.

A French 75 with a Colorful Twist

This bygone cocktail usually mixes Champagne, lemon juice, cognac or gin, and sugar. Instead of the sugar, add a small splash of antioxidant-packed pomegranate juice or kidney-healthy cranberry concentrate (that’s 100 percent pure cranberry juice). Not only will it taste super-tangy, but it’ll also have a seasonal red tint. 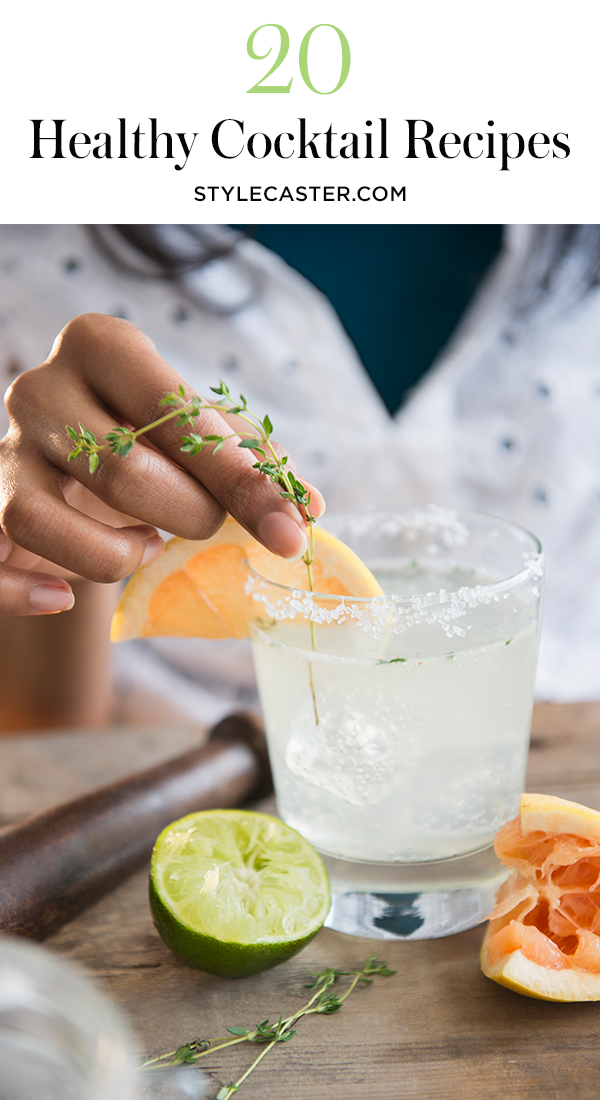 A version of this article was originally published in December 2013.