As one of the most popular songs from Harry’s House, it makes sense why fans want to know what Harry Styles’ “Late Night Talking” lyrics mean and who the song is about.

“Late Night Talking” is the second track from Styles third studio album, Harry’s House, which was released in May 2022 and reached number one on the Billboard 200 chart. The song, which is two minutes and 58 songs long, was written by Styles and Thomas Hull, who also co-wrote Harry’s House songs like “As It Was,” “Music For a Sushi Restaurant” and “Daylight.” In an interview with Apple Music One’s Zane Lowe in May 2022, Styles explained how Billie Eilish inspired him to make Harry’s House.  “I think being in the band, I’d always felt like we were really young… And I had a moment seeing [Billie] do this at such a young age where I felt like, ‘I’m not that young anymore.’ And for a while it was, how do you play that game of remaining exciting?” he said.

Styles told Lowe that he was “thankful” for Eilish, who represented an artistic liberation for him and “broke the spell” of him overthinking his music.. “This is so unbelievably liberating to go, ‘I just want to make good music.’ That’s it. That’s what I want to do. And everything else is what it will be. And that’s kind of it,” he said. He continued, “I was kind of like, ‘I’d be really fun to make an album called Harry’s House,’ and thought about it being this smaller thing. And then it was back to that thing of, ‘Maybe that’s an album I’ll make in four years or five years or whatever.’ And as I started making the album, I realized it wasn’t about the geographical location. It’s much more of an internal thing.” As for how Harry’s House is different from his past two albums—2019’s Fine Line and 2017’s Harry Styles—Styles told Lowe that his third album is“more electronic in a lot of places than anything I’ve made, it’s also so much more intimate to me. And so much more intimately made.” 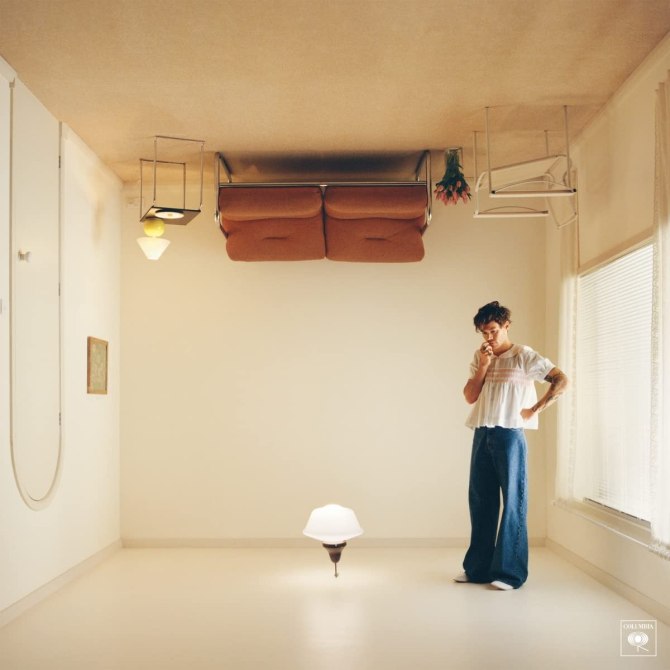 What are Harry Styles’ “Late Night Talking” lyrics about?

What are Harry Styles’ “Late Night Talking” lyrics about? “Late Night Talking” is the second track from Styles’ third studio album, Harry’s House, which was released in May 2022. Styles first performed the song at the Coachella Valley Music and Arts Festival on April 15, 2022, where fans theorized that “Late Night Talking” was about Styles’ girlfriend, Olivia Wilde—who also stars in and directed his 2022 movie, Don’t Worry Darling. “And nothing really goes to plan / You stub your toe or break your camera / I’d do everything I can to help you through,” a lyric in the first verse reads.

The part that interested fans the most was the lyric about the “camera,” which theorists believe is a reference to Wilde’s career as a director. Another part that hinted at Styles and Wilde’s relationship was a lyric in the second verse, which reads: “I’ve never been a fan of change/ But I’d follow you to any place/ If it’s Hollywood or Bishopsgate, I’m coming, too.” Don’t Worry Darling was filmed in Los angeles, where Styles lived in the Hollywood Hills home of his manager, Jeff Azoff. Bishopgate is an eastern gate in London, England, where Styles owns a home. According to E! News, Styles and Wilde traveled from Los Angeles to London together in February 2021 after the final week of filming Don’t Worry Darling. “Harry and Olivia loved being on the road and have gotten very comfortable spending all of their time together. They are rarely apart and it made sense to go to London together,” a source told the site at the time.

In an interview on “The Howard Stern Show” in May 2022, Styles opened up about what it was like to be directed by Wilde in Don’t Worry Darling. “I had a wonderful experience being directed by Olivia,” he said at the time. “Acting is kind of very uncomfortable at times. I think you have to trust a lot. It requires a lot of trust if you want to kind of give it everything, and I think being able to trust your director is a gift, so that was very helpful.” He continued, “It meant for a really nice experience working on that movie.”

Wilde and Styles started dating in January 2021, three months after Wilde’s breakup with her fiance, Jason Sudeikis, whom she shares two kids with: son Otis Sudeikis and daughter Daisy Josephine Sudeikis. While Styles hasn’t confirmed if “Late Night Talking”—or any of his songs from Harry’s House—are about Wilde, he did tell the radio station Heart in March 2022 that the album was inspired by his personal life. “I try and write from personal experience for almost everything,” he said. “So, I think over the last couple of years with the forced pause that happened for a long time for all of us, I think I had a lot of time to kind of think about work out who I was, away from music and get a little more comfortable with that. I think that allowed me to make this album from a very liberated place.”

A source also told In Touch Weekly in March 2022, that there’s a “really good chance” that Styles has written a song “about how he feels” for Wilde on Harry’s House but the track won’t be a traditional love song.”Don’t expect it to be straightforward,”the insider said. “He likes to keep his personal life private. But then again, he is in love, so maybe, he’ll surprise us with a song that’s all about his feelings for Olivia.” The source continued, “Harry isn’t known for penning songs about his personal relationships, even though ‘Two Ghosts’ is thought to be about his ex Taylor Swift, but the buzz is that there is a love song relating to Olivia on his new album. He likes to write in a general way, about his experiences, dreams, whatever inspires him, but nothing that points directing to a specific individual. That may have changed.”

Another source told In Touch that Wilde “is giving this relationship all she can because she truly wants to make it work. However, it is not easy.” The insider explained how Wilde and Styles’ busy schedule has taken a toll on their relationship. “Olivia and Harry are both working on projects, and Harry has a million things going on. He just wrapped his North American tour and will start on his European tour shortly, so he will be in Europe rehearsing and working on music,” the insider said. According to the source, Olivia “balances her schedule with her children’s, as she has joint custody with their father,” Sudeikis. The insider continued, “It’s tough for Olivia because in her heart she wants to be with Harry all the time, but it’s just not possible.” The source also noted that Wilde “puts her kids first and Harry respects that.” The insider continued, “They love their alone time of course, but Harry really enjoys being with Otis and Daisy. Harry and Olivia have something special, and they know it.”

In an interview with Dazed in 2021, Styles declined to comment on his relationship with Wilde and told the magazine that he likes to keep his romantic and professional lives separate. “I’ve always tried to compartmentalize my personal life and my working life,” he said.

Things haven’t been quite the same

There’s a haze on the horizon, babe

It’s only been a couple of days and I miss you, mmm, yeah

When nothing really goes to plan

You stub your toe or break your camera

I’ll do everything I can to help you through

If you’re feeling down, I just wanna make you happier, baby

Wish I was around, I just wanna make you happier, baby

‘Bout anything you want until the morning

I’ve never been a fan of change

If it’s Hollywood or Bishopsgate, I’m coming, too

If you’re feeling down, I just wanna make you happier, baby

Wish I was around, I just wanna make you happiеr, baby

‘Bout anything you want until thе morning

Can’t get you off my mind

‘Bout anything you want until the morning

I won’t even try (All this late-night talking)

Can’t get you off my— (All this late-night talking)