When it comes to award show fashion, I very rarely give a damn about the men. Yes, there are a few style standouts that serve on every single red carpet, but let’s be honest—they’re pretty few and far between. That is, they were before Harry Styles came into his own and refused to let his look be defined by boring gender norms! Styles is always pushing limits in something bold and unexpected. He also always looks hot AF, not that you asked, and his GRAMMYs look is a perfect example.

In truth, I was never a One Directioner, but I’m a massive fan of Harry’s solo career and his foray into the fashion world. Don’t even try to argue against the sheer fact that his Vogue cover (You know, the one for which he wore a dress) was one of the magazine’s most iconic photoshoots of all time!

Whether he’s styling up a patterned shirt and trousers or opting for something totally unique, Styles’ last name is fitting. The man has style! 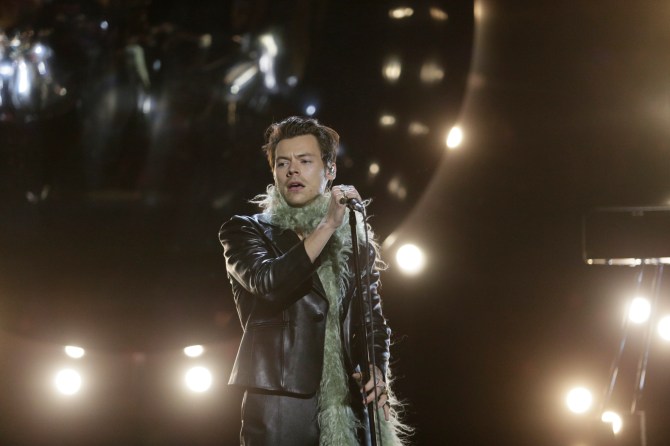 And of course, he made sure to show it off for the 2021 GRAMMY awards, at which he celebrated his very first GRAMMY nominations. When he took the stage to perform “Watermelon Sugar,” Styles wore a custom Gucci leather cropped jacket and wide-leg leather trousers with no shirt, and added a (faux fur!) fuzzy green boa as the pièce de résistance.

TBH, the look really reminded me of Billie Eilish’s signature hair color, so I was sad when he stripped off the boa mid-performance—although I won’t lie, I did enjoy the peek at his abs. Sue me! 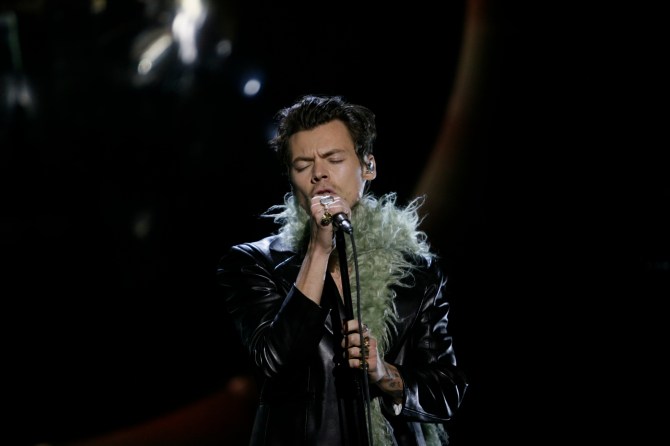 Proving just how versatile his fashion sense can be, Styles swapped his leather getup for a yellow tartan blazer, a striped sweater vest, and a pair of brown trousers on the red carpet and again to accept his trophy. The designer? Gucci, obviously! A boa was still included, but this time it was light purple instead of green. Rumor has it he even donned a third colorful boa towards the end of the show! 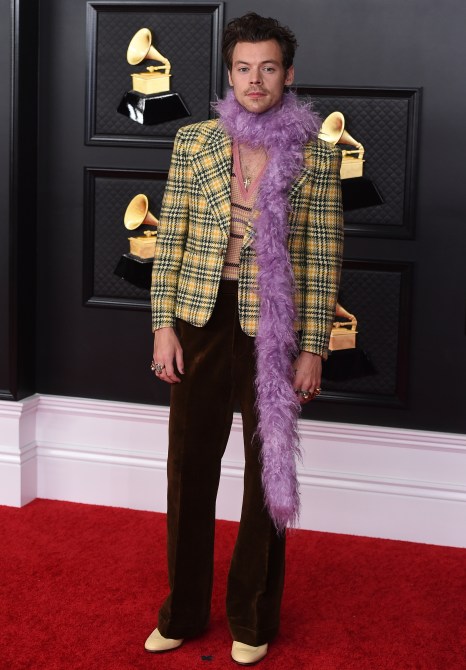 How does he always manage to be the best-dressed celebrity at literally everything? Harry’s stylist deserves all the awards, in my opinion. That said, Styles was nominated for some awards of his own, including Best Pop Solo Performance for “Watermelon Sugar,” Best Music Video for “Adore You” and Best Pop Vocal Album for Fine Line. Not too shabby for his second album, am I right?

Considering how infrequently we get to see our fave celebs these days (Boy oh boy, do I miss pre-pandemic award show season!), it’s especially nice to see them all dressed up and giving us something to get excited about. Then again, I’m pretty much always excited to see Styles—the crush all my friends had on him when he was in 1D is definitely hitting me years later! It’s never too late to be a Harry stan though, am I right?