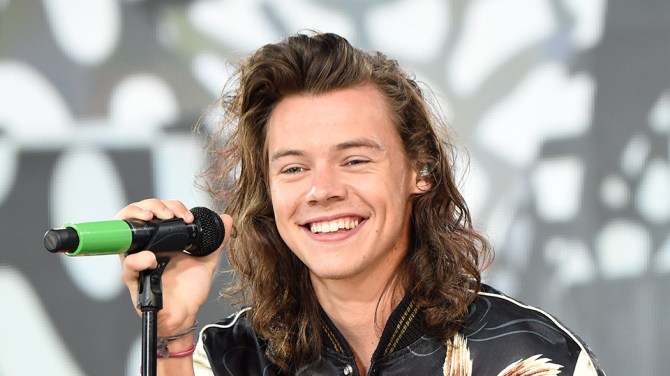 Harry Styles may be turning only 22 today, but that doesn’t mean that he’s been letting any grass grow under his feet, romantically speaking. Besides being the undisputed hottie of One Direction and becoming a high-fashion fan (he’s basically being the biggest stan ever for Alessandro Michele’s Gucci), Harry has found lots of time to play the field, racking up a track record that exceeds his years —literally. It’s apparent that Harry loves the ladies, from Pixie Geldof to Kendall Jenner, regardless of vocation or even age (rumored ex-fling Nicole Scherzinger is nearly 16 years his senior).

Without further ado, here is every single girl Harry Style dated, might have dated, or definitely didn’t date, despite the Internet thinking they did.

1.Caroline Flack: The 36-year-old “X Factor” presenter received death threats from Directioners when it was revealed that she and a 17-year-old Harry were dating (she was 32 at the time.) The blonde TV personality has also been romantically connected to Prince Harry.

2. Nicole Scherzinger: Nicole met Harry when he was just a baby-faced 16-year-old on “The X Factor,” where she was a guest judge. They were rumored to have had a secret fling when he turned 19 and she was 35. Looks like Harry has a thing for the older ladies.

4. Alexa Chung: Fashion favorite and It-girl Alexa Chung is known for dating musicians and was rumored to have dated Harry, especially after she posted a cheeky tweet about the rumors.

5. Kimberly Stewart: Kimberly Stewart reportedly has her very famous father to thank for her alleged (and brief) liaison with Harry. Apparently, the two hit it off after having dinner with Rod and wife Penny Lancaster.

6. Caggie Dunlop: The reality TV (“Made in Chelsea”) darling was said to be dating Harry after the two of them were seen at a nightclub together, but both have denied any romance.

Back in cold NYC

7. Sara Sampaio: The Portugese Victoria’s Secret model was spotted smooching with Harry Styles after a night out in New York (in fact, it led to a breakup with his then-gf Nadine Leopold), but both remained mum on the subject.

8. Nadine Leopold: Harry dated Nadine Leopold, a Victoria’s Secret model, this past year, but long distance and her perpetual fear that he was cheating drove them apart. Apparently, she unfollowed fellow Angel Sara Sampaio after Sampaio spent a night partying with Styles.

10. Taylor Swift: Probably Harry’s most high-profile romance to date, Taylor and Harry’s short-lived romance was the ultimate meeting of the fandoms. Although it didn’t last for long, it did spawn a song (predictably) about Styles on Swift’s 1989 album.

Am I doing this right?

11. Erin Foster: After a few cozy lunch dates and a trip to the pumpkin patch, it looked like Erin might be Harry’s new May-December romance. She’s also only a few degrees of separation from Harry’s former/maybe current flame, Kendall Jenner (more on that later)—Kendall is BFFs with Gigi Hadid, whose mother, Yolanda Foster is now getting divorced from Erin’s dad, David Foster (yes, that one)—got it?

Just going to lay here instead of hopping on that flight back to the cold..⚓️

12. Georgia Fowler: Apparently, the Victoria’s Secret model and Harry took a romantic trip to New Zealand together in October, which set lots of relationship rumors flying.

14. Emma Ostilly: Emma received a round of death threats from Directioners on Twitter after a picture of her kissing Harry surfaced to the point that she shut down her Twitter account; it also caused friction between her and her boyfriend (whose existence did nothing to squelch the rumor mill).

15. Lucy Horobin: DJ Lucy and Harry’s flirtatious banter over the radio caused such a ruckus that many have blamed Harry for her 2012 divorce (including her ex-husband!).

16. Daisy Lowe: Model Daisy Lowe might be best known for making headlines when she announced that Gavin Rossdale was her father in 2004, but she’s constantly being romantically paired with pal Styles.

17. Pandora Lennard: This alternative modeling agency founder, stylist, and creative consultant has been “just friends” with Harry for a while now, but sparked rumors in the New Year when she was spotted leaving his house in the wee morning hours.

18. Allison Mosshart: Artist Mosshart absolutely refuses to talk about anything related to a romance with Harry Styles—which makes us think that there’s definitely something to talk about.

19. Lou Teasdale: Lou is Harry’s hairstylist and close friend, but that hasn’t stopped fans from wondering if they’re an item.

20. Kendall Jenner: Kendall and Harry were rumored to have an on-again-off again romance back in 2013; however, this holiday season, the two were spotted spooning and smooching on a yacht while on vacation. Looks like Harry might be off the market (at least for now), ladies.