Warning: Spoilers for Netflix’s Too Hot to Handle ahead. If you’re already bingeing the new reality TV dating series, chances are, you’re well aware of this pair’s serious attraction for one another. It’s enough to make us wonder if Harry and Francesca are still together after Too Hot to Handle; after all, it’s been over a year since the series was filmed for Netflix, and a lot could’ve happened since then (you know, not even including the fact that everyone is homebound RN!)

Not to mention—fans of Too Hot to Handle are already pointing out Harry and Frankie’s slightly *ahem* toxic traits. But we all know that hasn’t always stopped people from dating each other, especially when the chemistry is there. That’s definitely the case for 23-year-old Harry Jowsey, originally from Australia, and 26-year-old Canadian influencer, Francesca Farago. By the end of Too Hot to Handle, they left the series’ tropical island retreat together.

But whether or not they’re still an item is up for debate. Here’s everything we know about their relationship status so far.

That’s promising! We normally wouldn’t read into this too much, seeing as how reality show contestants often follow their castmates on socials. But this situation is a little different for a special reason: Harry and Francesca don’t even follow everyone else in the cast. That makes this feel like even more of a good sign. Either that, or they’re just keeping up appearances. 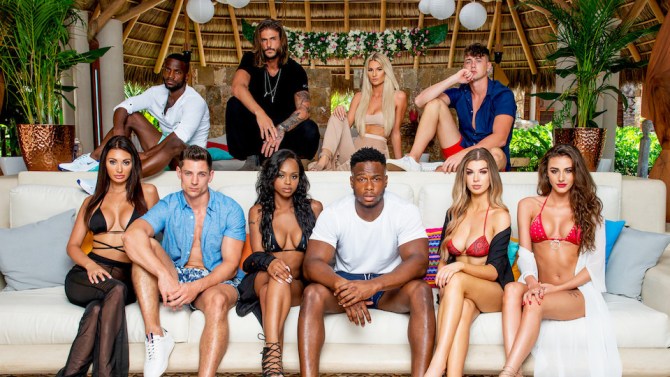 They Both List L.A. as a Location in Their Bios.

We know that neither Harry or Francesca are from Los Angeles originally, but both list the city as a secondary location in their Instagram bios. While it could just be that both of them split their time there for their work as social media influencers, it’s also possible that they made an effort following Too Hot to Handle to share a common home base (and that’s especially the case for Harry, who isn’t even from this continent!).

Here’s where things get more interesting. A deep dive into each of their Instagram posts reveals that Harry and Francesca have posted similar photos from their respective hometown’s—for Harry, that’s Australia, whereas Francesca’s base is in British Columbia, Canada. A little over a year ago in the summer of 2019, Harry might have been paying his boo a visit in Vancouver based on this Instagram post:

Meanwhile, Francesca also paid a visit to Australia around the same time that Harry was posting photos from his time at home. Not only that—the pair even shared flicks from what looks to be the same location, posing with none other than a kangaroo. Sounds like a date if you ask us.

As soon as the pair started sharing Instagram posts to promote their appearance on Netflix’s Too Hot to Handle, fans noticed pretty quickly that Harry was still being his flirty self in the comments. Exhibit A: 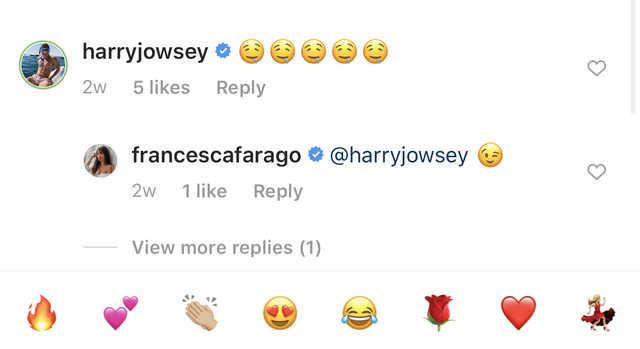 But especially curious fans went deep into the archives and noted that Harry’s been commenting and tagging Francesca since, well, that Vancouver kiss. He even went so far as to call Francesca out in the comments directly: 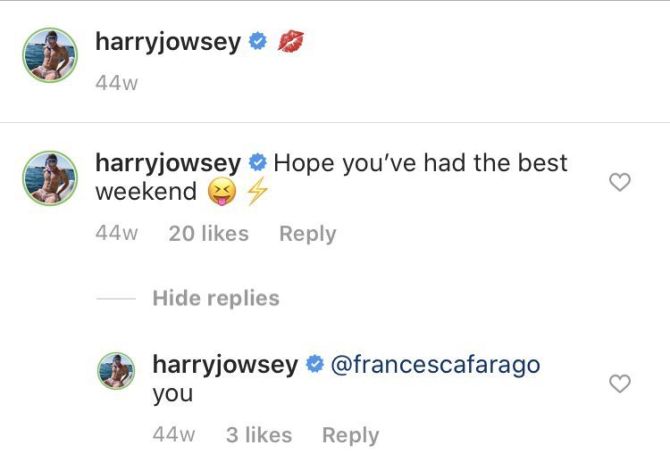 But They Both Posted About Being ‘Single’ Recently…

Despite all of the evidence above, the pair both hinted at the idea that they were single on Valentine’s Day 2020. In a caption for a photo shared that week, Harry wrote, “As Valentine’s Day approaches it’s a good time to think about relationships and how it’s two people coming together to solve problems you wouldn’t have if you were just single 🤔.” While that’s relatively vague, he clarified his caption even further when he commented, “Staying single forever” on his own post.

Francesca, on the other hand, geotagged her Valentine’s Day post with the location “Single Island.” She wrote, “happy V day to everyone getting drunk w their friends tonight & NOT texting their exs ;).”

So is it possible these two were together for a time, only to split before Feb. 2020? It certainly seems like it. But we’ll just have to wait to see if they comment on their relationship IRL before knowing for sure.