Her performance literally left us breathless. Halsey’s Emmys performance video reminded us all why the Television Academy decided it needed to be the “Without Me” singer to perform the In Memoriam tribute this year. The 71st Primetime Emmy Awards occurred at the Microsoft Theater in Los Angeles and it honored the best of the best in television for the year.

The songstress showed up to the Emmys purple carpet ready to perform. Styled by Zoe Costello–the “Now or Never” singer sizzled in a picturesque ombre purple feather gown designed by Rami Kadi. She accessorized her look with massive crystal pink earrings, a diamond neckless and minimalist makeup done by Denika Bedrossian and sponsored by NYX Professional Makeup. She also showcased her natural curls to pair with the beautiful look. 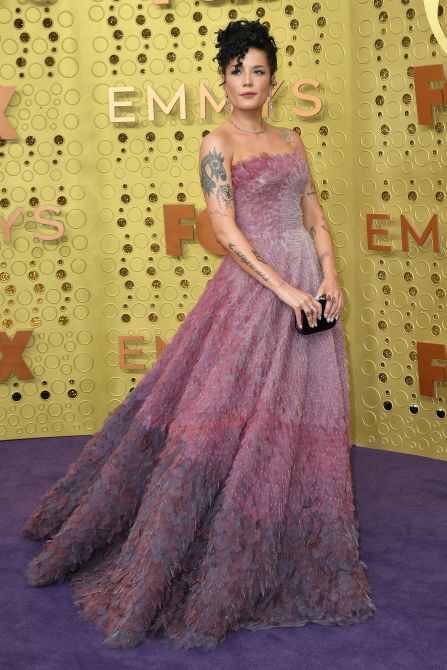 However, as we celebrated wins like Jharrel Jerome’s for his portrayal of Korey Wise in Ava DuVernay’s When They See Us–we also remembered everyone we’ve lost in TV. Some of the biggest names on television left us this year, and to commemorate their work and their lives, Halsey sang a stunning rendition of Cyndi Lauper’s “Time After Time.”

Not many musicians attend the Emmys, so Halsey’s appearance, performance, and vocal-were truly magnificent to behold. For her performance, she changed into a lace black gown.

Watch the performance below.