Through the years and several impulsive Target runs, I’ve amassed a rather impressive collection of Halloween decor that is entirely tailored to my preferences. I’ve never been one for zombies or fake blood—think more haunted Victorian mansion inhabited by a fabulous ghost who throws dinner parties and wears gowns to breakfast. There’s nothing I love more than poking into every under-bed box and giant Rubbermaid container in the house to gather the tricks, treats and trimmings required for my apartment’s evil makeover every year.

And while it is my favorite thing, it is also pretty much only seen by me. I’m concerned bringing others into my lair will warrant judgment, specifically from members of the opposite (and therefore my desired) sex.

There’s a line from “High Fidelity” that has always resonated with me: “What really matters is what you like, not what you are like.” If you’re reading this and you’re in Gen Z, High Fidelity is a movie that doesn’t reference the Internet or cell phones at any point. The line sticks with me because I think it’s entirely true—and I worry it’s causing me problems. I like weird things. I do things differently. And after many years on earth and several extremely beneficial astrological readings, I understand that I’m meant to embrace my perpetually-different-from-everyone-nature. It’s a gift.

I’m not looking to cast spells or possess souls, I just wish every month was October, that’s all.

There’s just one problem: Halloween. I’m concerned that my fake skeleton parts, wall-adhesive bats, orange and purple twinkle lights and skull snow globe are rendering me romantically repellant. Is my fake raven skeleton in a giant cloche giving the wrong impression? Were the foam headstones a mistake? I’m not looking to cast spells or possess souls, I just wish every month was October, that’s all.

Some people love Halloween, and then there are people like me who consider Halloween season the only time their homes are properly decorated. And I promise you, in this house, Halloween season starts way before you think it does. 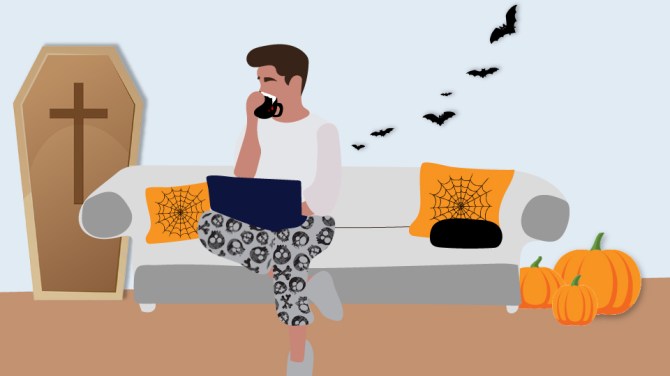 I’ll not go so far as to perpetually adorn my apartment in the macabre—I do like saving it for a certain time of year so as to render it special. But it’s not a gentle preference. I love Halloween. I love the dark, spooky-scary but also entirely safe sense of drama one can only get from decking out the home in black and white striped organza in the manner of a Tim Burton film. No? Just me? Cool.

The concern is that it’s weird. I’m weird. I’m not pushing the pedal down far enough to be goth, nor do I fall in the pumpkin spice latte camp. The only pumpkins in this house in fact are carved into the shape of a big pumpkin with a little pumpkin in its mouth so it appears to be eating its young. And I’m wondering what my inability to properly package myself or even identify what these kinds of creeptastic cravings mean for me in terms of my romantic marketability. I don’t need my fake ghosts creating new ones, ya feel me?

It’s odd to think I’d rather have fake plastic skeletons all over the room than an actual boyfriend, but here we are.

Am I sending out repellant energy because I don’t want to have to explain to hypothetical dates (that ended very well, apparently) that my apartment means them no harm? Have I been single these last 11 Halloweens because I’m unwilling to compromise regarding home haunts? I harbor such shame around my weirdness, while at the same time feeding off of the joy it brings me privately. It’s odd to think I’d rather have fake plastic skeletons all over the room than an actual boyfriend, but here we are. 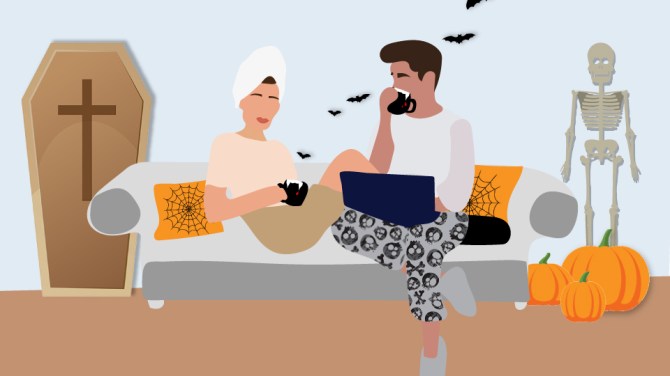 There’s an option I’m overlooking of course—and it’s the best one. It’s the obvious one, when you think about it. As I sit here at my kitchen table-slash-office typing away in full view of the fantastic old-timey lantern made out of fake bones I got online for a song, I’m entirely positive that somewhere, there’s a guy drinking his morning coffee out of a mug with a vampire fang rim.

He’s had a fake coffin full of candy sitting on his wet bar for weeks. His favorite sweatpants have a subtle skull pattern. His ice is frozen in the shape of bats. He’s the exact same amount of weird as me: not too demonic, not too Pinterest, but just right. And he, too, is wondering if having a woman over to his apartment will end in horror.

It’s just that he hasn’t met me yet. He will someday. Someday when we’ve both accomplished the level of self-worth and wholeness I thought I’d have achieved way before 37 years old, we’ll meet, we’ll compare notes, and discover we’re going to need a bigger storage bin for decorations.

I wish I could tell him that there’s absolutely nothing wrong with being the exact brand of weird that you want to be, and wanting a judgment-free relationship at the same time, and that someday he’ll be in good company.

Can you imagine? Twice the Halloween supply? I can’t wait.