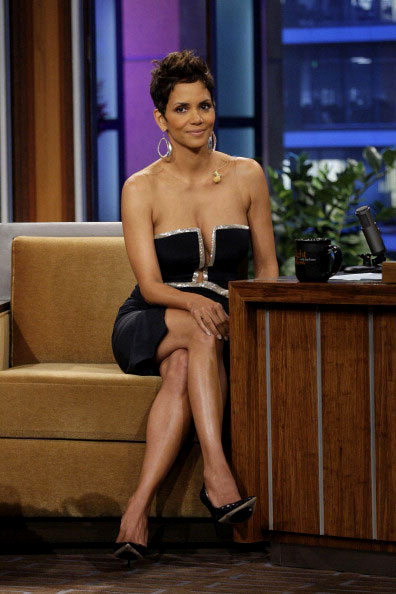 Yes, Halle Berry might be pushing 50 years old, and is a mom to 4-year-old daughter Nahla, but she’s clearly not letting those pesky facts stop her from constantly showing up to events in jaw-droppingly skimpy ensembles.

Her most recent nearly-naked appearance? Last night, the 46-year-old Oscar winner stopped by “The Tonight Show with Jay Leno”clad in an extremely low-cut and short Reem Acra dress that left little to the imagination.

That’s not to say Berry didn’t look amazing in the dress: She’s obviously stunning and her body is fabulous, but she’d still be hot and fit if she wore clothes that had an overall chicer feel. She’s one of the most famous women in the world and likely has access to every collection under the sun, so it’s confusing to us why she always feels the need to show up to events wearing very little.

In fact, the covered-up (but still sexy) Versace dress Halle wore to the 2013 Oscars was a hit with critics, so perhaps she should invest in some more designer pieces that aren’t so cleavage-heavy—especially when she’s doing a sit-down interview.

What did you think of Berry’s look—was it a hit or a miss?