This is not a drill: Halle Berry and her new boo made their red carpet debut at the 93rd Academy Awards, so naturally, it’s time to share everything there is to know about Halle Berry’s boyfriend. Let’s get into it.

Months before making their relationship red carpet official (and before Berry debuted her equally-new short hair at the 2021 Oscars), the Bruised actress introduced her boyfriend to fans on social media. At first, Berry teased their relationship with a cryptic post in August 2020, where she shared a scenic photo of herself playing footsie in bed with someone. By the next month, however, Berry confirmed their relationship when she shared a photo of herself wearing a shirt with his name on it: Van Hunt. She cheekily captioned the photo, “now ya know…” Since then, the pair have been pretty vocal about their love for one another on social media before finally making their public red carpet appearance at the 2021 Oscars. 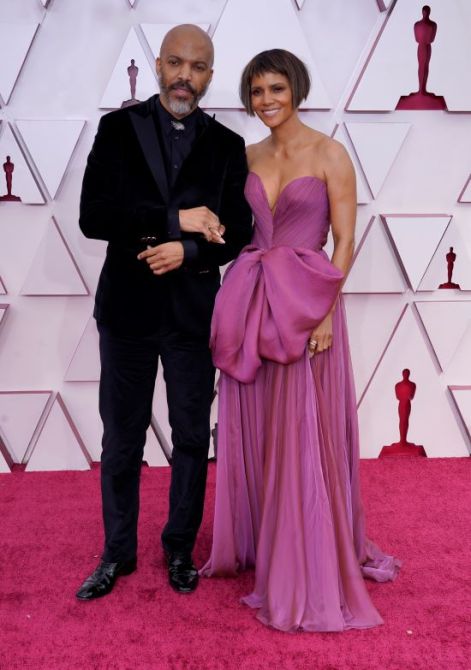 Prior to Berry’s relationship with Hunt, the actress was married and divorced three times—first to baseball star David Justice from 1993–1997, then to singer Eric Benet from 2001–2005, and from 2013-2016 to actor Olivier Martinez, with whom she shares a 7-year-old son, Mateo. Berry also shares a 13-year-old daughter, Nahla, with model Gabriel Aubry, whom she dated from 2005–2010.

Now, however, it’s possible that Berry has found “the one” with Hunt, according to a source who spoke to Us Weekly. So, let’s get to know him better! Keep on reading for all the deets on Halle Berry’s boyfriend, Van Hunt.

Van Hunt has been in the music industry since the late ’90s, having released dozens of records and working with famous artists from the likes of Kanye West to Alicia Keys. The musician and songwriter is even the recipient of a Grammy nomination and win.

He was first nominated by the Recording Academy for his song “Dust” in 2004 for Best Urban/Alternative Performance. In 2007, he eventually took home the award for Best R&B Performance by a Duo or Group With Vocals for his collaboration on a Sly & The Family Stone tribute album, Different Strokes For Different Folks.

Hunt opened up about being the father in 2011. “It is a lot of fun,” he told UrbLife.com about the experience of raising his son, who was 7 at the time. “I can’t imagine anybody not wanting to explore the opportunity to be a father, if you should decide to have a child.”

He thinks of Halle as his “muse”

During an interview with Entertainment Tonight in March 2021, Hunt gushed about how Berry was his muse “in more ways than I can even tell you right now,” before going on to reveal the actress is the “inspiration” behind his new music and more.

“The inspiration for our relationship goes across everything, even in my parenting,” he told ET. “I’m a completely different person, I can say it like that, and I think that it’s improved every aspect of my life.”

He went on to add, “I like to acknowledge [her other talents] because I don’t know that people know that side of her because she can write as well. You guys are gonna be surprised at all the things that she can do. Yeah, I can’t tell anymore than that but you gonna be surprised.”