Halle Bailey expected the live-action Little Mermaid to be emotional, but what she didn’t expect was to cry for three days while filming one of the Disney movie’s most iconic songs: “Part of Your World.”

“I definitely would say ‘Part of Your World,’” Halle tells STYLECASTER of the most emotional scene from The Little Mermaid to shoot. “It was really surreal to film. It was really emotional for me. It was three days of intense being all over the place. I was crying the whole time because I was just like, ‘What the heck?’ We’re all connected to that song and it means a lot to each of us.”

Halle was cast as Ariel, a mermaid princess who falls in love with a human prince, in the live-action version of Disney’s 1989 animated film, The Little Mermaid, in June 2019. While the movie—which is set to debut on May 26, 2023—features the same characters as the original film, Bailey promises there will be some modern changes when it comes to The Little Mermaid’s themes. “I think everyone will be pleasantly surprised by some updates of the themes of the film,” she says. “More so on Ariel’s side of women empowerment and her taking her power back.

She also confirmed there will be new songs not seen in the original movie, including a new track sung by King Triton (Javier Bardem). “There are some new songs as well. I really like them,” she says. “I know Javier let the cat out of the bag that he has a whole song. I like that one.” 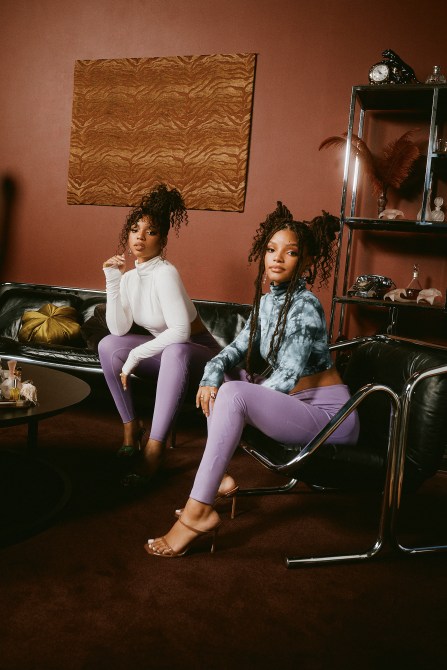 As fans wait for the release of The Little Mermaid, Halle and her sister, Chloe—who are better known as the duo Chloe x Halle—are hard at work on their third studio album. “We’re definitely building up a lot of experiences for our next album,” Chloe says. “It’s so cool because we’re definitely finding ourselves right now and things that click with us. When we come back together, the music is going to be that much better.”

In December 2021, the sisters also launched their first clothing collection with PINK, which they described as “comfort” meets “style.” “We’ve always loved PINK. We just love what they’ve stood for. It’s all about empowering you as an individual and feeling comfortable in your own skin,” Halle says. “When it came to the process of making our own clothing line, we were just like, ‘We want comfort and style.’ It’s about being comfortable but also cute. My sister works so hard. We both work so hard. We’re always in the studio, rehearsing. We always need outfits that are cute, presentable but comfy. Whether you’re in rehearsals or in the studio 24-hour sessions, whatever it is, when it came to this collection, that’s what we were thinking about.”

For the collection, which includes leggings, crop tops, turtlenecks and sherpa jackets, the sisters chose a color scheme of black and purple to represent their sisterhood. “I love how it’s purple and black because black is very slimming and sleek. We wear black a lot,” Chloe says. “But the purple also represents our sisterhood bond and royalty and how we are queens. We want women to feel powerful when they put it on and comfortable and easy and simple.” 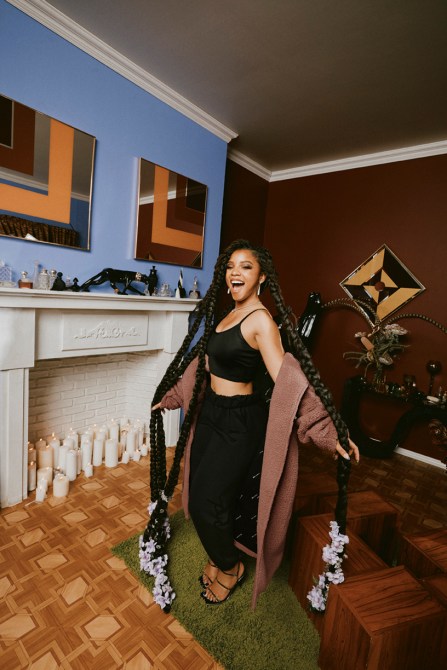 As for their favorite piece from the collection, both Chloe and Halle agreed that the sherpa trench was the standout item. “My favorite piece from this collection would definitely be the sherpa jacket,” Chloe says. “It’s so warm and cozy. We can wear it at the airport, wear it right now. What I love about these pieces is you can dress them up and dress them down. We could literally go out in the same exact thing and go work out and do a spin class or the gym. Or we could just put on bling accessories with heels and have a night out on the town in New York City, where it’s really cold. I really like how they’re functional for everything.”