Hailie Sahar didn’t have a blueprint for success—not when she was transitioning genders; not when she was finding an acting agent; and not when she was auditioning for roles. Though she had an idea, no one told her what the trans experience would be like in Hollywood. So Sahar, 30, learned it on her own, navigating sexual harassment, violent threats, and stereotypical scripts until she eventually landed a life-changing role on FX’s “Pose,” Ryan Murphy’s buzzy new drama about New York City’s ballroom scene in the 1980s.

“Pose” has been hailed as one of television’s most transgressive series, casting five trans actors (including Sahar) in its lead roles. But to Sahar, the show is more than that. Beyond hiring more than 100 trans people behind and in front of the camera and telling a story that’s representative of Sahar’s own trans experience, “Pose” gave Sahar the opportunity to become that example of success for future generations of transgender youth. “It feels like my calling. It feels like a blessing,” Sahar tells StyleCaster. “If I can be that blueprint for someone else, I know that it’s going to be a little bit easier. It won’t be all the way easy. But it will be a little bit easier.” 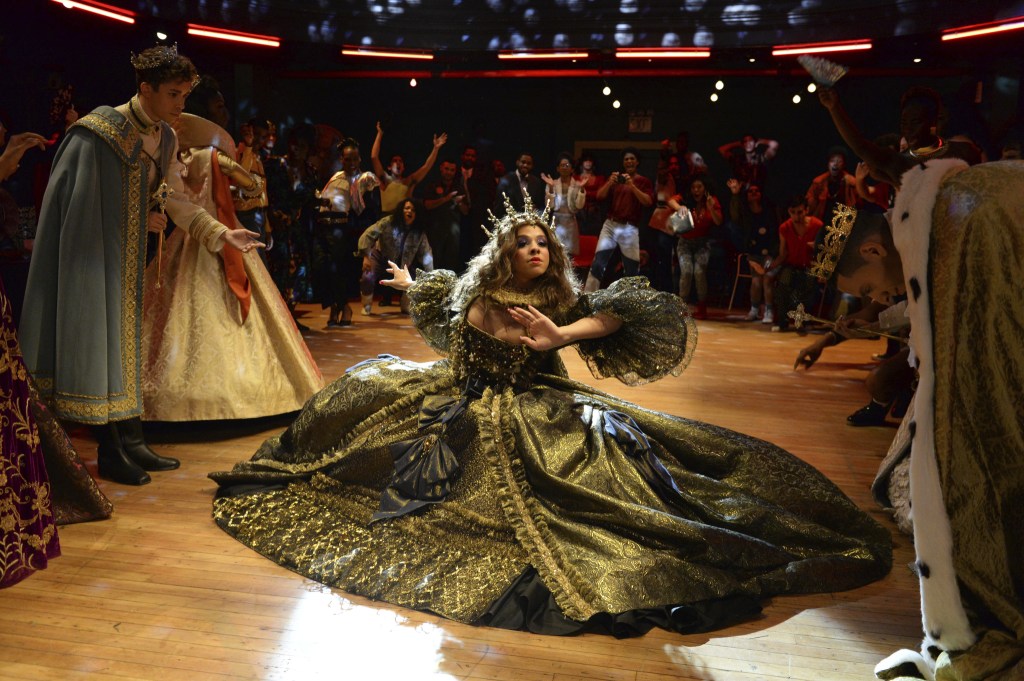 Sahar, the only daughter of six, grew up in a religious household in Los Angeles. Her father and grandfather were both pastors. “I’m a preacher’s kid,” Sahar says. She found her passion for performing at a young age, making tickets for her family and forcing them to watch her perform shows in their living room. After asking her mom to enroll her in a performing-arts school, Sahar went on to become a child dancer for L.A.’s WNBA team, the Sparks.

Acting didn’t come until years later when Sahar was in her 20s, and her professional dance background helped her land her first on-screen role in 2011’s “Leave It on the Floor,” an original musical set in L.A.’s ballroom scene. Though she had submitted herself for auditions before, the film was the push Sahar needed to pursue acting full-time. “I knew from that moment that this is what I wanted,” Sahar says.

The word ‘trans’ has a stigma—like we’re not capable. Like we can’t do the job.

The first step was finding an agent. Aware of the number of murders and attacks against trans people, Sahar, who pursued acting after her physical transition, knew from the beginning that she wanted to be up front with her agents that she was trans. “I was afraid that if I didn’t tell the people who represented me who I was, if anything ever came up where someone was going to harm me, I wouldn’t be protected,” Sahar says. “I didn’t want to be in a situation where someone may have come on to me, even if I rejected them, and when they find out that I was of a trans experience, they would try to harm me. I thought that if I told my agency who I was, they would be able to protect me and be able to look out for those things on my behalf.” 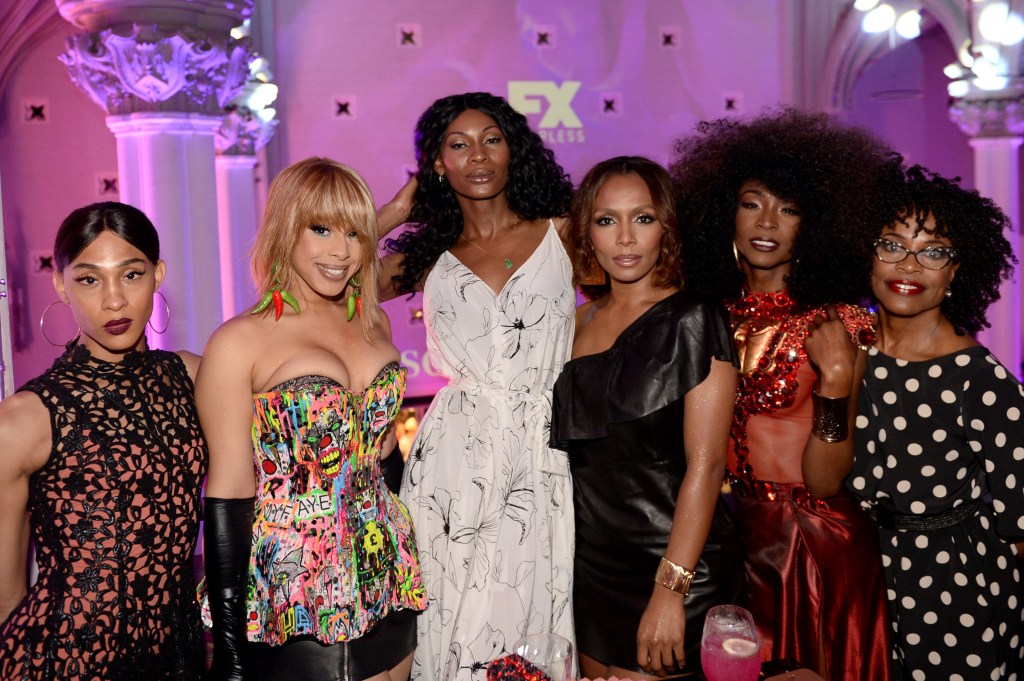 It didn’t take long for Sahar to find an agency that wanted to represent her. However, after making sure that her contracts were signed and ready, she noticed an immediate change in her agents’ demeanor when she told them that she was a trans woman. “When I said, ‘Hey, by the way, I happen to be a trans woman, the situation went from being professional to that old thing of ‘let me sleep with you,’” says Sahar. “People went from treating me with respect and like a talented artist to completely just wanting to go to bed with me, and when I said no, the whole contract was shredded up.”

Encountering the same situation over and over, it took a long time for Sahar to find an agent. “Those same people who I was hoping to protect me turned out to be the people who could’ve harmed me too,” Sahar says. After finally finding an ethical agent through a mutual connection, Sahar was ready to start working. But her challenges in the industry were far from over. Though Sahar makes it clear that she looks for a wide range of roles (“I’m a woman who happens to be trans. I don’t lead with, ‘I’m transgender. This is my stamp, and this all of who I am.’”), the trans roles she has come across, which were few and far between, have all been riddled with stereotypes. “The way that they were written was almost like it was a cisgender man trying to be a woman,” Sahar says.

In addition to the misgendering of trans characters, such as the use of he to describe trans women, Sahar often came across scripts where trans women were prostitutes or escorts, a trope that perpetuated the stereotype that trans people were hypersexual. “They were always trying to push this whole narrative of all of these girls having sugar daddies, when it’s like, ‘Hey, hello? Do you not see I actually am a woman of trans experience and I’m actually a smart girl who is following her dream?’” Sahar says. “Write a story about that. Write a story about a girl who wants to help her family or is in college or something of that nature. I’m a regular person like everybody else. Where are the regular storylines?”

If we take the labels off, we realize that we’re just human.

After years of small roles on shows, such as USA’s “Mr. Robot” and Amazon’s “Transparent,” Sahar received the script for “Pose,” an ’80s-set drama about New York’s ball culture, a community where often-outcasted LGBTQ people would compete in teams (“houses”) with leaders (“mothers” and “fathers”) in competitions (“balls”) consisting of dancing, posing, and voguing for prizes and acclaim.

Coming from the ball community herself, Sahar was hungry for the role. When she was 16, she was at a house party in the Hollywood Hills when she met the father of a house who convinced her to “walk” for him. After walking in her first competition and winning, Sahar went on to become her father’s personal daughter. At 18, she started her own house and became the youngest mother in L.A.’s ball community. “The ballroom scene is where I discovered the freedom to be my authentic self,” Sahar says. “I always knew who I was. But as far as the courage to actually go forward with who I am, the ballroom scene gave me that courage.”

After several auditions for two different roles, Sahar received a call telling her that she booked neither. However, on her last audition where she read for the show’s creators, she made a lasting impact on Ryan Murphy, who decided to write a role—LuLu, a fashion-loving diva who is second-in-command to a mother of a house—specifically for her. “My agent said verbatim, ‘Ryan is obsessed with you, and he loves you so much that he’s creating a character for you, and he wants you as a series regular,’” Sahar says. “My heart completely dropped because what an honor it was to be loved by someone who I’ve admired for so many years.”

But “Pose” isn’t only making strides for the trans community onscreen. The show has hired more than 100 trans people behind the scenes, in the makeup, writing, and production departments. It’s an achievement that Sahar hopes will convince more companies to hire trans people, in and out of Hollywood. “I feel like the word trans has a stigma to it. Like we’re not capable. Like we have some mental problem. Like we can’t do the job. But you can see that the show is doing great,” Sahar says. “It’s alive with transgender people. They really hired people who are capable of doing the job. They happen to be of the trans experience. That’s how life should be.”

The world is so much more beautiful with all of the colors of the rainbow.

With social media’s boom and younger generations’ yearning to see underrepresented stories, Sahar acknowledges that there’s a huge shift toward diversity on-screen. “The hunger for truth in society has changed, and because of that, there’s a higher demand for real things,” Sahar says. But that doesn’t mean the fight is over. For Sahar, the next steps for Hollywood—and the world—is to shed labels that put people in boxes. “As a human race, we all have these categories we put people in: You’re black. You’re white. You’re gay. You’re straight. You’re cis. You’re trans. You’re this. You’re that,” Sahar says. “We have all these labels. If we take the labels off, we realize that we’re just human.” 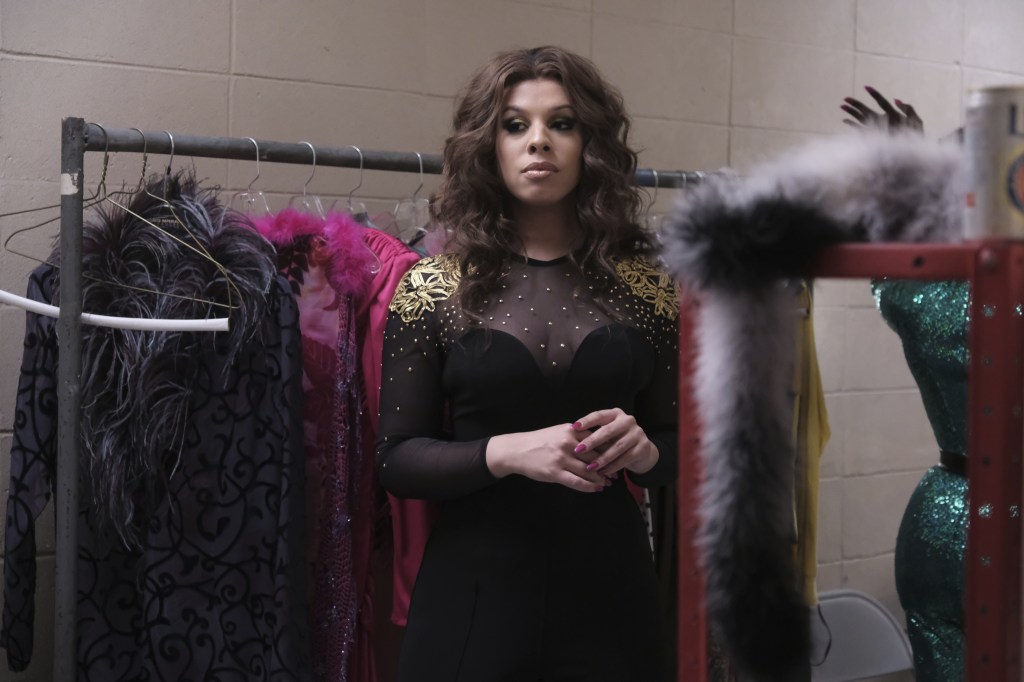 As for the impact of “Pose,” Sahar is happy about the show’s effect on LGBTQ visibility. But she doesn’t want people to be mistaken: Trans people aren’t a fad—they’ve always been here. “Being of trans experience did not happen overnight. Sometimes that’s what people portray, like, ‘Oh, this is a new thing. This is what’s popular now.’ Trans people have been popular since the beginning of time,” Sahar says. “People have chosen to have a blind eye to them, to turn, and to elect to not see them. We’ve played a major part in life, and it’s a beautiful thing that we’re actually able to sit at the table now. The world is so much more beautiful with all of the colors of the rainbow.”