Count Hailey Baldwin out of Taylor Swift‘s squad. Though Baldwin’s fellow supermodel BFFs (Kendall Jenner, Cara Delevingne, and Gigi Hadid) have all guested on Swift’s 1989 World Tour, it seems like Baldwin won’t be joining them on stage anytime soon—at least, according to her recent Instagram behavior.

The 20-year-old supermodel threw major shade at Swift, 27, on Instagram yesterday when she liked a meme suggesting that she would love to give Swift a good smacking. (Side note: We don’t condone violence. Celebrity shade, though, is fair game.)

The meme featured a tweet from a Swift fan asking how much it would cost for their followers to smack the singer, and whether $835 billion was still too low. Someone replied saying they would smack Swift for the low price of a sweet tea from McDonald’s, which garnered a like from Baldwin. 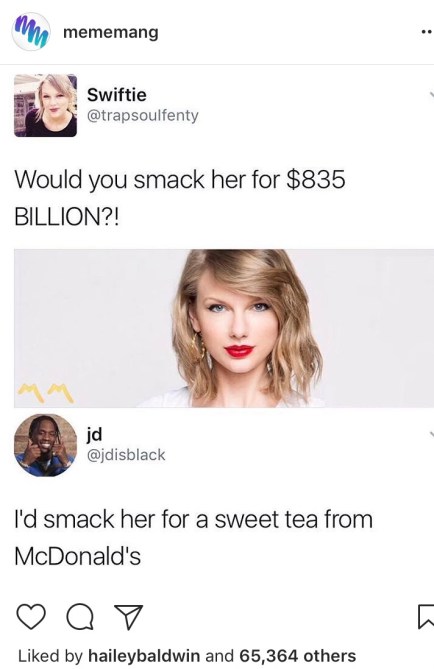 Whether or not that like was intentional or malicious, Baldwin isn’t the only supermodel to distance herself from Swift recently. In May, Kim Kardashian confirmed that Kendall Jenner was “never” in the singer’s squad. In July, rumors flew that Swift had split from her (former?) BFF Karlie Kloss after the supermodel was spotted hanging out with Jenner at Paris Fashion Week. Long story short: All signs point to draaaama.

While we have no idea what’s up with Swift’s squad these days, we can semi-confidently predict that her supermodel gang will be trimmed down by the time her next music video comes out. And we’ll venture to guess that Baldwin will not be among the squad members who are MIA.