Model Hailey Baldwin stepped out in New York City this Wednesday to accompany her fiancé, Justin Bieber, to the hair salon. The Biebs was in for a much-needed trim, and one can only assume Baldwin, loving partner that she is, was there to offer moral support.

But if I’m being honest, what I care more about than Justin Bieber’s hair or the couple’s presumably supportive partnership is Baldwin’s outfit. Because when I saw it, I did whatever the silent equivalent of screaming “YAAAS” is. 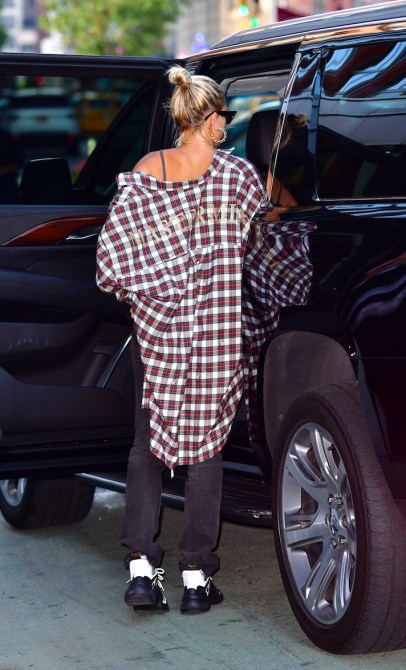 The model was clad in head to toe loungewear: a dark gray tank top, black jeans, chunky sneakers and an oversized flannel shirt. Her ensemble is low-key as hell, and the gold jewelry she threw on makes the look even more incredible.

It’s the kind of outfit you wear when you’re too lazy to actually get dressed but too self-aware to walk around in literal pajamas. (Hm, I need something to make my outfit less obviously chill. I know—I’ll throw on gold jewelry!) And since that’s pretty much my go-to aesthetic, I’m very here for this.

The only problem: Baldwin’s ensemble isn’t actually that low-key—at least, the price tag isn’t. Her oversized plaid shirt will run you a nice $1,255 at Mode Sens, and it’s already marked down 35 percent. (So you don’t have to whip out your calculator: The shirt was originally $1,935. That’s nearly $2,000 for a mere flannel shirt. I know. I’m dying, too.)

But you know what? Power moves only. My respect for Baldwin and her not-actually-that-low-key low-key outfit is immense. Keep doing you, girl. And as for the rest of you, I’ve pulled a few similarly styled (similarly expensive) flannel shirts for your browsing pleasure, below.