Hailee Steinfeld responded to claims she shaded Niall Horan. The 22-year-old took to her Twitter on Wednesday after she was accused of shading her 25-year-old ex on Instagram, and her response was nothing but class.

The accusations came on January 2 after the Bumblebee star reposted an Instagram story from singer-songwriter Julia Michaels, which talked about Michaels’s New Year’s resolution of not dating any more narcissists. “NEW YEAR’S RESOLUTION: NO MORE DATING NARCISSISTS,” Michaels wrote.

Steinfeld apparently related. Not too long after, the “Starving” singer reposted Michaels’s Instagram, with the caption, “God bless you @juliamichaels. Preach it.” She also reposted series of quotes about how “narcissists are masters of manipulation” who “believe they’re entitled to every shred of their partner’s attention, so they label anything else as ‘selfish.’”

It didn’t take long for fans to suspect that Steinfeld was talking about Horan. Though the couple never confirmed their relationship, it’s been reported that they dated for about a year and broke up in December. However, despite their recent breakup, Steinfeld maintains that her cryptic Instagams weren’t about her One Direction ex.

Soon after the accusations came in, the one-time Oscar nominee took to her Twitter to deny shading anyone. “No hidden messages my loves. Just reposted an interesting read that I’m sure some of y’all can relate to. Nothing but love! ♥️” she tweeted. 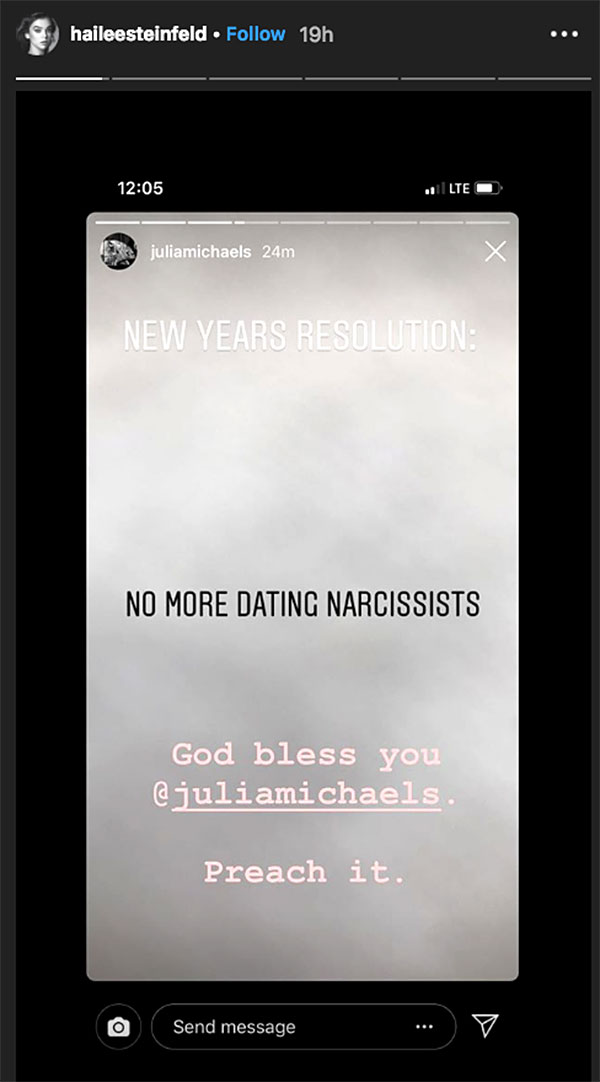 Steinfeld and Horan first sparked dating rumors at the beginning of 2018 after they were seen together at a West End production of Hamilton in London. In the months that followed, the couple were photographed kissing and packing on the PDA in Los Angeles. In December 2018, Us Weekly reported that the couple broke up over their busy schedules. “They split months ago,” a source told Us Weekly. “Niall wrapped up his tour and had more free time, but Hailee’s work schedule really ramped up, so they didn’t have time for a relationship. They still have a lot of love for each other.”