Gwyneth Paltrow is in the headlines for saying something ridiculously pretentious so often now, we almost forgot she’s an Academy Award winning actress. It’s almost like her sometimes condescending and offensive musings have eclipsed her actual talent.

But is Paltrow super snobby—or just horribly misunderstood? Read some of her quotes and you be the judge.

On the trouble with Parisian concierges

“When you go to Paris and your concierge sends you to some restaurant because they get a kickback, it’s like, ‘No. Where should I really be? Where is the great bar with organic wine? Where do I get a bikini wax in Paris?”

On her kids picking vegetables

“Just to have my kids be in the sun every day—picking avocados, going for a swim,” she says. “Even for two years or something, and come back when they go to senior school.”

On her own diet

“I eat whatever I want. I like bread and cheese and wine, and that makes my life fun and enjoyable.”

Weird, since she’s also claimed she cut out all booze and bread in other interviews.

On her children’s nanny

“She’s French, so she’s teaching them French, and their previous nanny was Spanish, so they’re fluent in Spanish.”

“Beyoncé’s like, ‘Okay. The singing is great. But you’re not having any fun.’ She’s like, ‘Remember when we were at Jay’s concert and Panjabi MC comes on and you do your crazy Indian dance? Do that. Be you!'”

On her reaction to flowering zucchini

“When I pass a flowering zucchini plant in a garden, my heart skips a beat.” 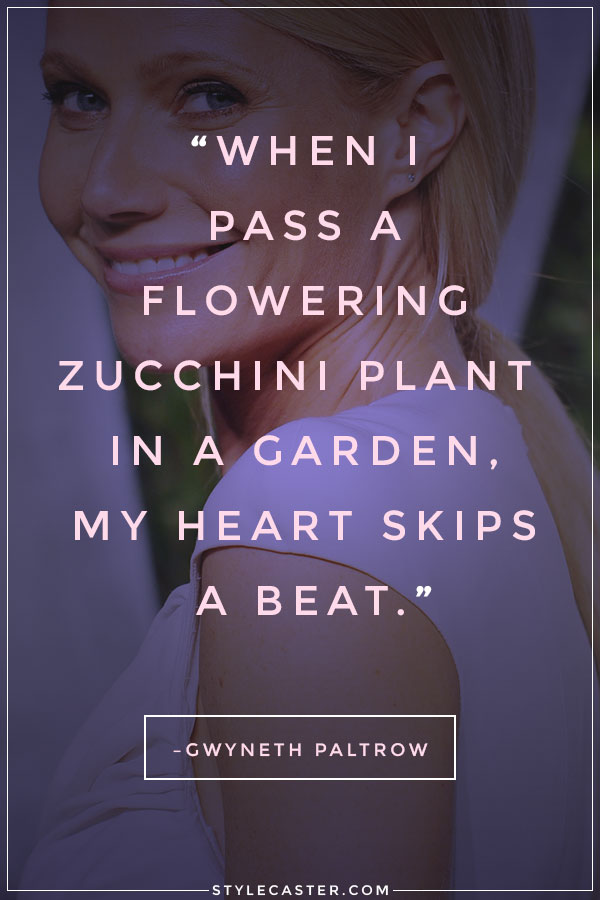 “I don’t hold on to fear as much as I used to, because I’ve learned a lot about genuinely not caring what strangers think about me. It’s very liberating. It’s very empowering, and I’ve learned a lot of that from Jay—Shawn Carter—Z, because his approach to life is very internal. It’s a very good lesson to learn.”

On America vs. Europe

“We have great dinner parties at which everyone sits around talking about politics, history, art and literature—all this peppered with really funny jokes. But back in America, I was at a party and a girl looked at me and said, ‘Oh, my God! Are those Juicy jeans that you’re wearing?’ and I thought, I can’t stay here. I have to get back to Europe.”

At a 2014 tech conference, Gwyneth said reading nasty things about herself on the web is akin to warfare.

“You come across [online comments] about yourself and about your friends, and it’s a very dehumanizing thing,” she said. “It’s almost like how, in war, you go through this bloody, dehumanizing thing … My hope is, as we get out of it, we’ll reach the next level of conscience.”

On getting through the cold winter months

In 2013, Paltrow revealed in an interview with Harper’s Bazaar‘s that she managed to get through her tenth London winter by assigning January “international month,” and amusing son Moses and big sister, Apple with a visiting Italian chef, Japanese anime screenings, and hand-rolled-sushi lessons.

On cheese from a tin

“I’d rather smoke crack than eat cheese from a tin,” Paltrow told a British talk show. 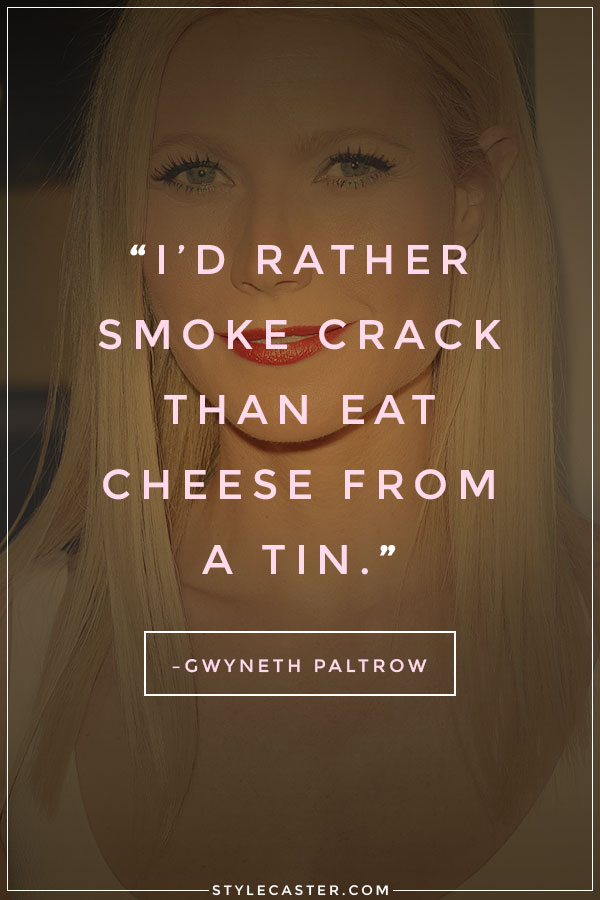 On the ultra-exclusive Met Gala

Paltrow strutted down the red carpet at 2013’s high-profile fashion event clad in a coral Valentino Haute Couture gown and looked downright thrilled vamping for the cameras. However, looks can apparently be deceiving. The next day, Paltrow told USA Today that she was actually having an abysmal time.

“I’m never going again. It was so un-fun. It was boiling. It was too crowded. I did not enjoy it at all,” she told the newspaper.

On her kids’ diet

“They love a brown rice stir-fry, but they also love their ‘Coke of the week.'”

Also: ”My daughter gravitates toward fresh fruit and raw nuts but will inhale a bag of hot Cheetos at the airport. It’s all about balance.”

These gems came from a GOOP newsletter, naturally.

“We’re human beings and the sun is the sun—how can it be bad for you? I don’t think anything that’s natural can be bad for you,” Paltrow so sagely told British Cosmopolitan.

On how water has feelings

On Goop, Gwyneth Paltrow rambled on about how she loves the work of Messages From Water author Masuru Emoto, whose studies have involved talking, yelling at and playing music to water to see if it had any molecular impact. Read her whole post about it here.

“You know, I use organic products, but I get [laser treatments]. It’s what makes life interesting, finding the balance between cigarettes and tofu.”

On hallucinating in Sedona, Arizona

“I’ll never forget it. I was starting to hike up the red rocks, and honestly, it was as if I heard the rock say, ‘You have the answers. You are your teacher.’ I thought I was having an auditory hallucination.”

“I think to have a regular job and be a mom is not as, of course there are challenges, but it’s not like being on set,” Paltrow said. 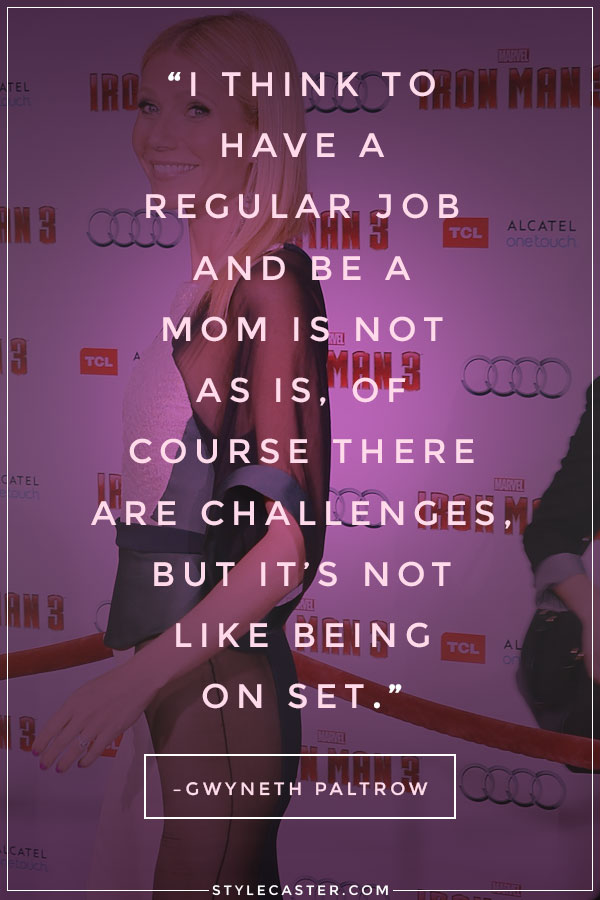 On her dream last meal (and boozing habits)

“Oysters and cocktail sauce, and then a baked, stuffed lobster and french fries. I would have a baguette and a cheese course for my dessert, and red wine. I drank like crazy [when the kids were babies]. How else could I get through my day?”

On what her family can’t live without

“We basically can’t live without Vegenaise—it’s a little out of control.”

“I AM AFRICAN.” Um, okay. (You’ll understand when you click the link, FYI.)

“I basically love anything that comes in a hot dog bun… except hot dogs.”

“Even actresses that you really admire, like Reese Witherspoon, you think, ‘Another romantic comedy?’ You see her in something like Walk the Line and think, ‘God, you’re so great!’ And then you think, ‘Why is she doing these stupid romantic comedies?’ But of course, it’s for money and status.”

On splitting up with her husband, Coldplay’s Chris Martin

Paltrow  posted the news on Goop, in a post titled “Conscious Uncoupling.”

Needless to say, the world still isn’t letting that one go. 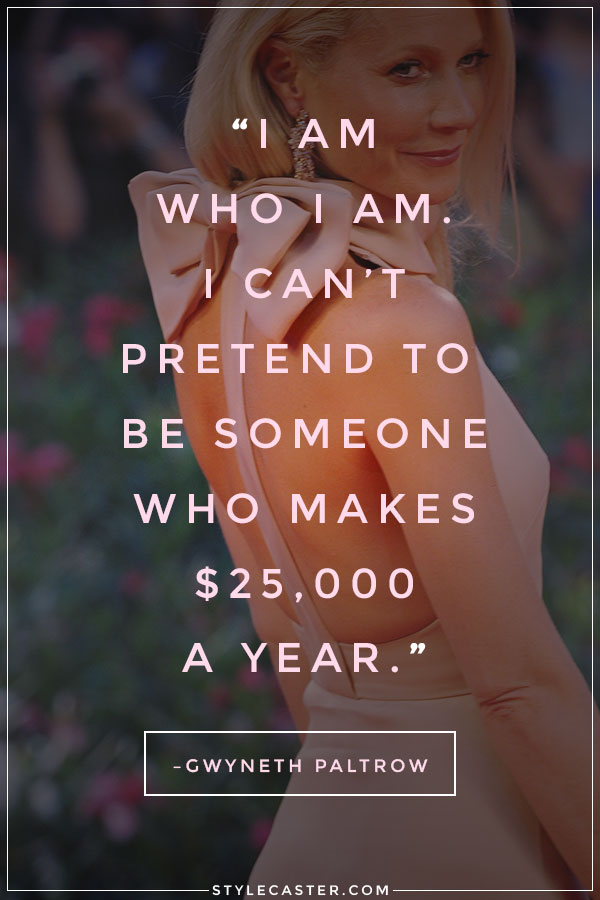 What’s your favorite Gwyneth Paltrow quote? Tell us below!