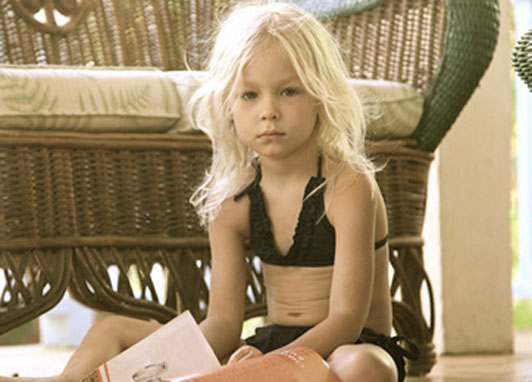 The kids’ bikinis Gwyneth is now selling on her website.

Gwyneth Paltrow can’t seem to win lately. The 40-year-old actress has been criticized for her controversial statements related to her children’s diet as well as her frequent flaunting of her privileged lifestyle, and she also took the top spot in Star magazine’s “Most Hated” celebrities poll. And now, she’s making more headlines thanks to a collaboration with swimwear designer Melissa Odabash, sold exclusively on her website Goop.

Sounds innocent enough, right? Here’s the catch: The swimwear collection she helped design is for kids, and features two-piece bathing suits with sizes appropriate for 4-through-8-year-olds who want to match their mothers. They retail for about $45, and although they don’t seem particularly inappropriate (seriously, little girls have been wearing bikinis forever—it’s not like she’s selling garters and teddies for tots), a British foundation to prevent child abuse seems to think they’re downright appalling

“We remain very opposed to the sexualisation of children and of childhood,” Claude Knight of the organization Kidscape told The Daily Mail. “The dangers have been discussed at length, so it is a great pity that such trends continue and that they carry celebrity endorsement.” Paltrow’s team, meanwhile, has called the criticism “absurd.”

What do you think? Is the organization whining just because Gwyneth is attached the product, or are the suits actually inappropriate? Let us know in the comments section below!

MORE: The 12 Most Ridiculous Things Gwyneth Paltrow Has Ever Said