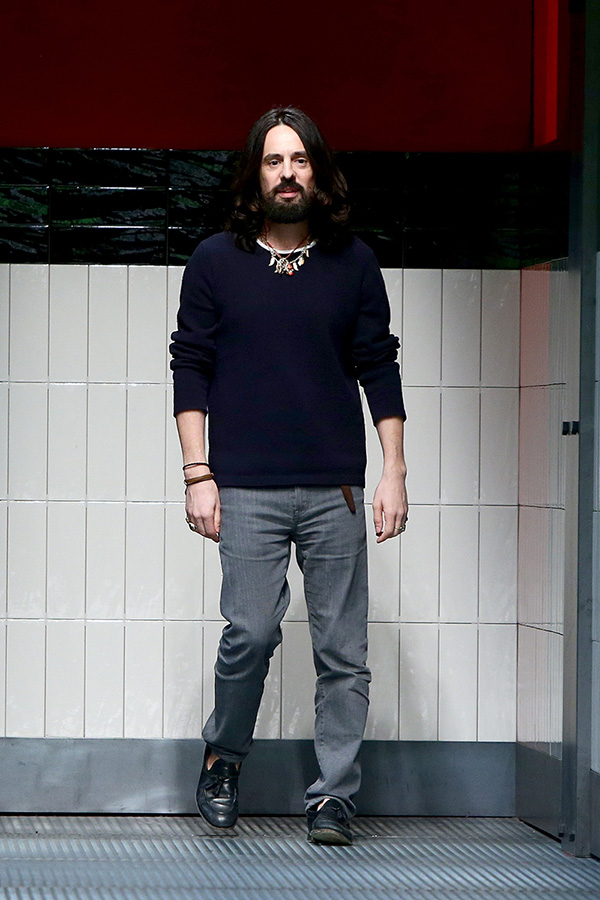 Relatively unknown designer Alessandro Michele officially assumed the top creative spot at Gucci in January, following in the footsteps longtime Creative Director Frida Giannini. Ever since, the fashion crowd’s been wondering what changes are ahead for one of the most recognizable luxury brands on the planet. Since taking the reigns, Michele has presented three collections—a men’s line (reportedly put together by he and his design team in just five days), a romantic, highly-styled women’s collection which he showed in Milan last February, and most recently, a buzzy women’s Resort 2016 collection staged in New York City with the likes of Dakota Johnson, Miroslava Duma, and Rachel Zoe sitting front row.

MORE: A Lesson in Dressing ‘Weird’ From Langley Fox Hemingway

With a few solid collections under his belt, Michele’s vision for the label is becoming increasingly clear—and will likely be a much-needed, more youthful direction for Gucci, whose most recent sales have been more or less stagnant for the $4 billion brand. Here, a few things to expect from the new Gucci now that Michele’s at the helm.

1. He’s been charged with bringing a more youthful vision to Gucci.

On the heels of Giannini’s departure, Gucci’s President and CEO Marco Bizzarri is urging Michele to adopt a more youthful vision for the house. “[Now] from a creative standpoint, it’s time to give a little bit of push in terms of modernity to make Gucci relevant again in the fashion world,” Bizzarri told Women’s Wear Daily following Michele’s appointment. “Gucci should become again a brand that is in the mind of opinion leaders, of fashion people. They should [feel] the need to go into the Gucci shop,” he said. It seems Michele’s youthful appeal is already paying dividends, with retailers from Bergdorf Goodman to Net-a-Porter praising his first women’s collection.

2. Shoes and bags are his thing—so expect greatness.

Michele is really an accessories designer at heart. He joined Gucci following a stint as senior accessories designer at Fendi, and rose to be the head of accessories for the house. Considering that leather goods represented almost 60 percent of Gucci sales in its 2013 fiscal year, accessories are at the core of Gucci’s business, and churning out “it” bags and shoes will be key to his success. Early signs look good: Bergdorf Goodman’s Senior Vice President Linda Fargo told Style.com that his “surrealist soft leather fur-lined bit slide shoe” made her personal shopping list for fall, while fashion critics praised the box bags and GG logo belts that came down the Fall 2015 runway.

4. His style swings toward androgyny.

5. His look veers less toward glossy jet-setter, and more toward vintage quirk.

While Gucci has long been known as the go-to for glossy, highly styled jet-setters (you know, the types of people who board private plants in five-figure python jackets), Michele’s inspiration leans towards the nostalgic. In the New York Times, fashion critic Vanessa Friedman wrote he’d seemingly “delved into an imaginary attic trunk full of vintage treasures, recombining the elements for the girls and boys of a haute flea market world” when creating his Fall 2015 collection.

5. He has a thing for witty details.

Fur-lined clogs? Check. Pink and red chevron mink coats? Check. Bug-inspired embellishments? Yes, those too. The man clearly likes quirky details, which have been all over the collections he’s shown so far.

In just a few months, Michele has scored some major red carpet coups. He dressed Salma Hayak for his Gucci womenswear debut in March, accompanied Georgia May Jagger to the Met Gala this year, and crafted two looks for Lupita Nyong’o‘s Cannes junket.

Nyong’os stylist, Micaela Erlanger, gushed to the New York Times about Michele’s role in creating the knockout dresses saying: “This year, Lupita and I decided to work with Gucci, whose new creative director, Alessandro Michele, designed two beautiful gowns for her. I had been so inspired by the florals in his Fall/Winter 2015 collection, and his use of feather-light chiffons, that it seemed like a perfect blending of stylistic moods … The Gucci team members were so generous with their time. They met us in Cannes so we could fine-tune the details and fit each gown with precision.”

7. He’s taking the ad campaigns in a cooler direction, too.

MORE: Pinterest is Becoming Shoppable: What This Means for Top Brands