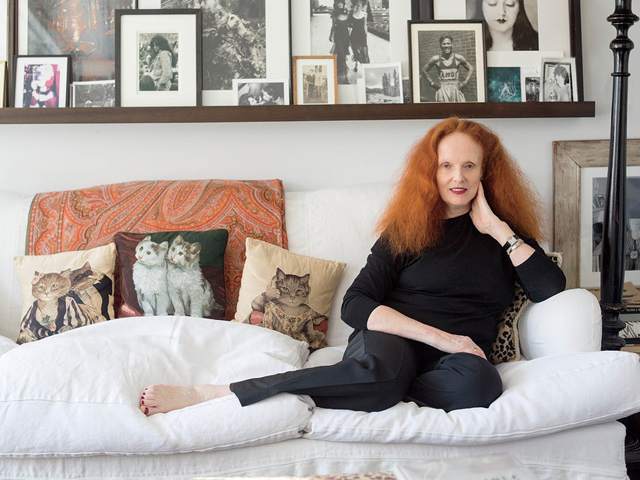 Grace Coddington has been at the visionary center of Vogue since 1988, as the magazine’s Creative Director, though she didn’t fully claim her place in pop culture until she stole the show in a documentary about Vogue, The September Issue, which was released in 2009.
Public interest in Coddington is at an all-time high (she’s even become a popular Halloween costume), though she remains pretty private, which is why we were so excited to get a peek inside her New York City apartment thanks to WSJ. Magazine.
The article describes Coddington as a “hoarder” thanks to her apartment that is chock full of everything from cardboard boxes from Hermès and Balenciaga, English ceramics, plates collected from her travels, jugs, and anything and everything having to do with cats. She even has cat cushions that were a gift from designer Nicolas Ghesquière.
The article also reveals that she is a huge collector of photographs shot by the likes of Guy Bourdin and Bert Hardy. Fitting in with this passion she is curating an online auction for Paddle 8, which kicks of May 1, that celebrates nude photographs.
Head over to WSJ. Magazine to see more photos from inside Coddington’s apartment and to get inspired!
MORE:
5 Tips For Planning Your Dream Summer Vacation On the Cheap
How To Make Homemade Raspberry Jam