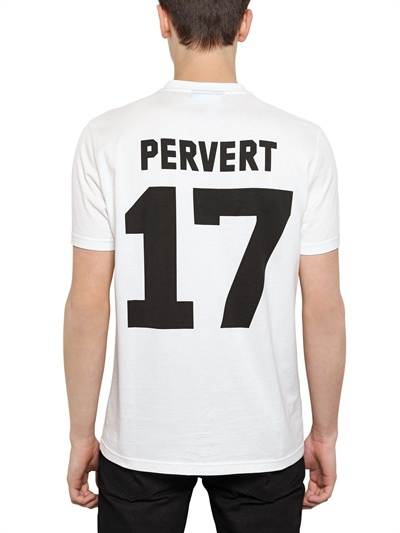 Maybe we’re the crazy ones here, but we’re pretty sure—as a man—declaring yourself a pervert is a pretty big don’t. Declaring it publicly on the back of a shirt? An even bigger don’t. That’s why this $325 Givenchy tee is such a head-scratcher.

It was one thing for designer Riccardo Tisci to infuse streetwear elements into Givenchy’s recent menswear collections—the designer managed to make images of feral-seeming rottweilers and man-eating sharks a thing and we were all for it. Yeah, it was a little odd, but it also was more than a little cool. It sent a message that the French fashion house is courting a younger, hipper clientele, which is totally fair in today’s celebrity (and blogger) obsessed world.

MORE: How To Avoid Buyer’s Remorse: A Complete Guide for Fashion Lovers

Selling a shirt that says “pervert” on the back, however, seems at odds with the label’s respected highbrow history—even if it’s fully intended to be tongue-in-cheek.

We understand that times have changed—today’s Givenchy fans include Ciara, Kanye West, and Rooney Mara—but we’re surprised Tisci didn’t think twice before unleashing something so overtly crass (with the number 17 on the back no less—still underage, perhaps?)

It’s worth noting that there has been an influx of luxe humor apparel that’s been flooding the high-fashion scene lately—Brian Lichtenberg’s designs (“Homies” in the style of Hermes, “Ballin”in the Balmain logo), NYCPARIS’ “Celine me Alone” tees, even blogger Jules Sarinana‘s wildly simple but oh-so-funny Célfie shirt that’s been making the rounds—so it’s clear that fashionable folks are looking for ways to laugh at themselves and at the industry. But this shirt isn’t merely a “ha ha” play on words—in fact, if we saw a man walking down the street in this tee—no matter how cool or stylish—we’d probably run the other way (or think he got hosed for shelling out $325 for it.)

We’re fans of Tisci’s work for Givenchy (we even quite liked the divisive floral dress-and-gloves look he created for a pregnant Kim Kardashian to wear to this year’s Met Gala), but we’re pretty sure no man or woman—gay, straight, old, or young—should pay good money to look like a creep. After all, humor and high-fashion work best together in subtly subversive ways.