Since rumors of their relationship issues, there have been questions over whether Tom Brady and Gisele Bündchen are still together or if they could be headed towards a divorce.

Tom and Gisele met on a blind date set up by a mutual friend in 2006. “I think the one phone call that changed my life was my friend Ed, who called me one day and he said, ‘I have this girl and I think you should call her,’ ” Tom recalled to WSJ magazine in 2021 about how he was introduced to Gisele. “I ended up calling her and it ended up being the love of my life.” The two started dating soon after but hit a tough patch in February 2007 when Tom’s ex-girlfriend, Bridget Moynahan, announced she was pregnant with his son. Gisele told CBS This Morning in 2008 that she considered breaking up with Tom after the news. “It was a challenging thing because here I am, you know, thinking, I’m dating this guy, we met, and we started dating and everything is great and then this happens,” she said. “So, then I felt like I didn’t know what to do. It was kind of one of those moments of like, ‘Do I just run away?’ ”

Tom and Bridget’s son, John “Jack” Edward Thomas Moynahan, was born in August 2007. Gisele later revealed in an interview with People in 2018 that she “fell in love” with Jack and his birth made her and Tom closer. “I’m so grateful for [Bridget],” she said. “I know this was hard, but I couldn’t imagine my life without [Jack]. I call him my bonus child.” She added, “He opened my heart in ways I didn’t even know my heart could expand.” Tom and Gisele got engaged in January 2009 and married a month later in February. They welcomed their first child together, son Benjamin Rein, in 2009. Their second child, daughter Vivian Lake, was born in 2012.

Fast forward to 2022, and there are rumor Tom and Gisele are in a “rough patch” in their marriage. So are Tom Brady and Gisele Bündchen still together still together? Read on for what we know about where they stand.

Are Tom Brady and Gisele Bündchen still together? 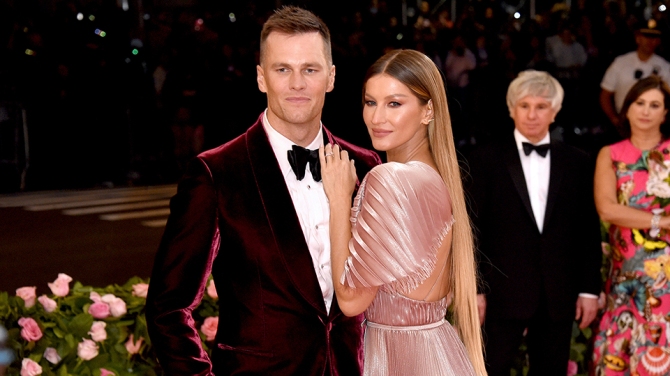 Are Tom Brady and Gisele Bündchen still together? The answer is yes, but they’re in a “rough patch” in their marriage. News of issues in Tom and Gisele’s relationship started in September 2022 when Page Six reported the couple was in a “fight” over the NFL player’s decision to unretire from the Tampa Bay Buccaneers in March 2022. (Tom announced his retirement from the NFL after 22 years in February 2022 before reversing that decision less than two months later.) “Tom and Gisele are in a fight right now,” a source told Page Six in September 2022. The insider added that there have been a “series of heated arguments” since Tom’s unretirement.

A second source explained that Gisele’s issue with Tom’s decision to unretire is the lack of time he’ll spend with their children: son Benjamin and daughter Vivian. Tom also shares son Jack with ex Bridget Moynahan. “There’s been trouble in the marriage over his decision to un-retire. Gisele has always been the one with the kids. They had agreed he would retire to focus on the family, then he changed his mind,” the insider said. A third source added, “They have a fiery relationship. Gisele is a bit hot-headed — she has that Brazilian heat!” The insider, however, added that Tom has always been a “family man,” regardless of if he’s in the NFL or not. “He’s such a doting dad, and very much a family man,” the source said.

The publication’s second source also claimed that Gisele has been working more—she’s currently the face of a new Burberry campaign—since Tom’s decision to unretire. “It’s almost like Gisele was like, ‘Well, if you’re going to keep playing, so will I,’” the insider said. “She’s resentful that Tom is still the football superstar.”

A source also told People in September 2022 that Gisele is “frustrated” with Tom and “has been spending time away from” him. “Going back to Tampa after the retirement put a strain on the personal side of his life,” the source said. “Gisele is frustrated and sick of his career coming before their family, who has always supported him.” The magazine also reported that Tom and Gisele spending time apart from each other “has happened before” and that the two are “trying” to make their relationship work. “There is a point Gisele believes that enough is enough,” a second source said. “[She has] always been an amazing wife, totally supporting Tom and his career and bringing the kids aboard.

A third source told People that Gisele is “not a stay-at-home mom.” The insider continued, “She has been working all along. She’s in N.Y.C. right now working, and the kids are enrolled in school in Florida.” The source also reported that Tom and Gisele had a “happy summer together” before NFL season and Gisele threw Tom “a big birthday party in Italy.” “He already announced his return to football this spring, so friends don’t understand why she’s upset now,” the insider said. “They’ve been very private about what’s really going on,” the source added. A fourth source also claimed to People that Gisele’s opinion on Tom’s unretirement had changed closer to NFL season. “It feels very different this year than last year,” the insider said. “She was excited to be here, we saw her around.”

A source also confirmed to Us Weekly in September 2022 that there was “tension” between Tom and Gisele after he unretired from the NFL. “Gisele was not happy when Tom un-retired from the NFL after such a short time,” the insider said. “There is tension between them.” The source added that Tom is “doing everything he can to make it up to” Gisele. “They’re working through things and trying to come out the other side,” the source said.

Page Six also reported in September 2022 that Gisele had moved out of her and Tom’s home in Tampa, Florida, and relocated to Costa Rica since their marital issues. “He’s very sad at the moment. Friends know they’ve had a serious disagreement this time,” a source said. “It seems that Gisele gets mad and says things like she’s leaving him, but in the past, they’ve always made up. But maybe this time it is more serious. He’s with the kids, and is just trying to be super dad.” Another source also told Page Six a week later that Gisele had returned to Florida, but hadn’t moved back in with Tom yet. “Gisele isn’t back with Tom,” the insider said. “She flew back to Florida to be with her kids but hasn’t been to their home in Tampa.” The source continued, “Tom is still hoping they can reconcile. Gisele has told him she’s leaving him before, and they always made up when she cooled down.” The source also called rumors at the time that Tom and Gisele were divorcing “not true.”

The TB12 Method by Tom Brady

A source also confirmed to People in September 2022 that there’s been “a lot of tension” between Tom and Gisele since his decision to unretire. “There’s a lot of tension. She was so happy when he announced his retirement, and she wasn’t thrilled at all when he went back on that,” the insider said. “They’re hitting a rough patch. But I know they’re trying, or at least he’s trying, to figure it out and make it work. He wants to get through this and for things to get better.”

In an interview with Howard Stern on SiriusXM in 2020, Tom confirmed that Gisele has often had issues with him not spending enough time with his family.  “A couple of years ago, [Gisele] didn’t feel like I was doing my part for the family,” he said. “She felt like I would play football all season and she would take care of the house. She wasn’t satisfied with our marriage. So I needed to make a change in that. Her point was, ‘Well, yeah, of course this works for you. It all works for you. But it doesn’t work for me.'” Tom also confessed at a recent NFL press conference that he needs to be “better” at balancing his work with his personal life. “[During] the off-season, my family’s got a lot of time. I’ve enjoyed that,” he said. “I can still do a better job of that. It’s just constantly trying to be a little bit better each day.” Tom also told reporters that every decision “comes at a cost” when responding to a question about his two-month retirement.

In February 2022, Tom announced his retirement from the NFL after 22 years. “I have always believed the sport of football is an ‘all-in’ proposition — if a 100% competitive commitment isn’t there, you won’t succeed, and success is what I love so much about our game,” he said in a statement on his Instagram. “There is a physical, mental and emotional challenge EVERY single day that has allowed me to maximize my highest potential. And I have tried my very best these past 22 years. There are no shortcuts to success on the field or in life. He continued, “This is difficult for me to write, but here it goes: I am not going to make that competitive commitment anymore. I have loved my NFL career, and now it is time to focus my time and energy on other things that require my attention. I’ve done a lot of reflecting the past week and have asked myself difficult questions. And I am so proud of what we have achieved. My teammates, coaches, fellow competitors, and fans deserve 100% of me, but right now, it’s best I leave the field of play to the next generation of dedicated and committed athletes.”

He reversed his decision six weeks later in March 2022. “These past two months I’ve realized my place is still on the field and not in the stands,” he wrote in an Instagram post at the time. “That time will come. But it’s not now. I love my teammates, and I love my supportive family. They make it all possible. I’m coming back for my 23rd season in Tampa.”