When two of our favorite things—Lifetime TV and fashion—collide, it can only mean one thing: campy genius.

This is sure to be the case with the upcoming made-for-television movie, “House of Versace,”which follows Donatella Versace as she struggles to overcome harsh criticism, drug addiction, and near bankruptcy after the tragic 1997 murder of her esteemed fashion designer brother Gianni Versace.

The trailer, set to Kayne West’s “I Am a God,” features enough coke snorting, leopard print, and one-liners like “I am Versace!” and “Did I stutter?!” to have us playing it on repeat (watch it here!), but most captivating of all is Gina Gershon’s portrayal of the fashion empire’s notorious bleach blonde. Aside from nailing her Italian accent, Gershon is the spitting image of Donatella.

To find out how the actress became the designer’s doppelganger, we caught up with the biopic’s costume designer, makeup artist, and hair stylist to talk vinyl, self-tanner, and wigs.

StyleCaster: How did you go about transforming Gina Gershon into Donatella Versace?
We got inspiration from actual pictures of Donatella, and reproduced some of the looks as close as we could. Other [costumes] were based on actual Versace vintage we found.

What kind of research did you do?
We looked at fashion show videos, books, and the Internet.

Is there an iconic photo you used as a point of reference?
We used the [Richard] Avedon-Versace book as a guide for many reproductions, especially the vinyl dresses.

What went into creating the costumes?
About 90 percent of what is in the movie and identified as Versace is replicas we made. Ten percent is vintage, including all the shoes.

Describe the wardrobe scene. How many racks of clothing and pairs of shoes are we talking about?
We had 10 racks at the shop, always full and transiting to set, one full trailer (equivalent to another 10 racks) for the cast, and around 6 to 10 racks every day for the extras. It is absolutely impossible to know the exact number of shoes. Gina had four boxes just for herself (about 40 pairs); she had about the same number of looks.

Is there a big shift in Donatella’s style during the movie? When and in what way did the costumes change?
The director had a color palette that changed with the different stages of the film. We tried to stick to it as much as possible. We realized at some point that the style of the house [of Versace] followed the lifestyle of Donatella, and I think the film and designs reflect that very well.

Were there any wardrobe malfunctions during the making of the movie?
We made a whole fashion show [scene] around this idea. We called it the “oops show.” It’s the first one Donatella does herself. The designs were good but the fit was not always perfect and the models were having some problems. We were inspired by the actual fashion show.

We’re thinking there could be a lot of Donatellas come Halloween. What are fashion must-haves for channeling the designer?
A long blonde wig, very high heels, skin-tight clothes, and 200 percent attitude!

If Donatella’s style were a song, what would it be?
“My way,” the Sid Vicious version, for the first part of the film, and Madonna’s “Material Girl” would work well too.

Have you had your fill of tight metallic?
Not yet. But I was not making all [the costumes] by myself.

StyleCaster: How did you approach transforming Gina into Donatella, makeup-wise?
I tried to make Gina as much a lookalike for Donatella as possible, keeping in mind the budget and time we had every day. Prosthetics were not an option. We had to be able to see the evolution of Donatella during the movie without the changes being too time-consuming. We established three stages for Gina’s transformation.

Donatella is always tan. Was it all self-tanner or was fake bake and/or spray tan involved?
Gina was having her body spray-tanned every week, and I used makeup on her face.

She looks less orange than Donatella. Was this a conscious decision?
Yes, because it was really important not to make her a caricature, and I was afraid that would be the effect on camera.

What did you do to Gina’s lips to get the Donatella pout so accurate? Were injections used?
There were no injections involved. We achieved the first look without anything. Later, I applied lip plumper. And, in the last stage, we put a little bit of cotton under Gina’s upper lip and cheated her lip line.

What’s your advice for someone who wants fuller lips sans surgery?
Lip plumper with shine and playing up the lip line, but always in a subtle way!

How did you achieve the Donatella eye?
I reshaped Gina’s eyes by making them less cat eye. It was a game of highlight and shadow to bring the shape as close to Donatella’s as possible. I used a variety of fake eyelashes for every stage of the movie to show evolution. I was bleaching Gina’s eyebrows too, as eyebrows change the structure of the face so much.

Is there a pivotal makeup moment in the movie?
There are many. When Donatella is abusing drugs, we decided to go with more makeup, as she is trying to hide it. And the last look, when the [plastic] surgery started to happen.

Were there any makeup mishaps while filming?
The fake eyelashes, as Gina has really sensitive eyes. I had to be very careful.

Do you think Donatella will be offended by your portrayal of her?
I don’t think so, as we were really careful not to go the caricature route. We showed her as a strong beautiful woman. She is an icon. 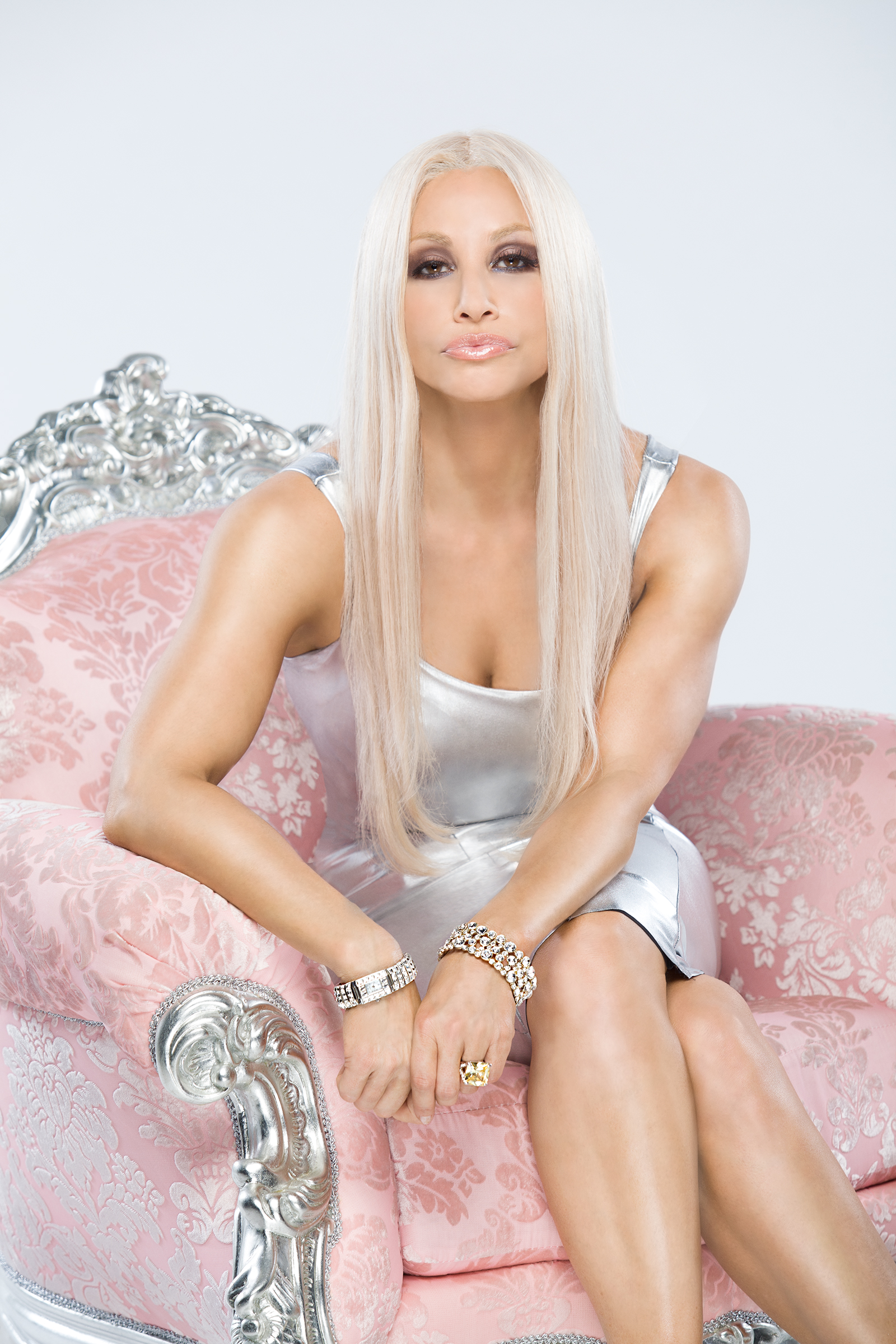 StyleCaster: What did you use as reference when creating the looks?
I looked online, in publications, and at fashion show footage.

Did Gina dye her hair for the role?
Gina did change the color of her hairline to help blend with the lace on the wigs. This also helped change the shape of her forehead.

How many wigs were used in the movie?
Two, [including] one that could have extensions, giving three different wig lengths.

Is there a pivotal “platinum” moment in the movie?
The fashion show scenes.

What hair advice do you have for platinum blondes?
Use conditioning products to protect the hair, and, of course, go to a good hairstylist.

Do you think blondes have more fun?
Oh, yes!

“House of Versace” premieres October 5 at 8/7c on Lifetime.