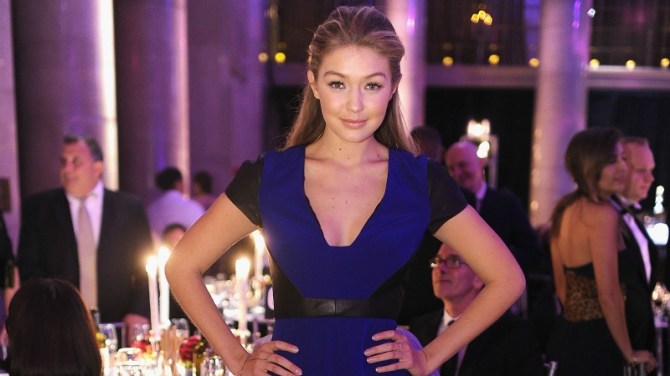 You’re going to want familiarize yourself with this name—Gigi Hadid—who’s on the cusp of taking the modeling world by storm. The daughter of Yolanda Foster, a former model and now star of “The Real Housewives of Beverly Hills,” Hadid was discovered when she was a tot, modeling for Baby Guess and Guess Kids.

After a hiatus, the 18-year-old is returning to the business in a big way: She’s on the cover of Carine Roitfeld’s CR Fashion Book, and she’s just been named a Sports Illustrated Swimsuit Edition Rookie.

No wonder Ivan Bart, Managing Director of IMG Models, recently told The Daily Front Row of Hadid: “She walks into a crowded room and you can feel her presence. Everyone is like, ‘Who is that?’ I can’t help myself when someone like her comes along …We’ll be seeing a lot of her from the second half of 2014 and into 2015. I have a very good feeling about this girl.”

MORE: Kendall Jenner Walked in Marc Jacobs in a Sheer Top and No Bra

We caught up with the model to watch during New York Fashion Week, after she walked in Jeremy Scott’s runway show, and talked about working with Carine Roitfeld, being followed by the paparazzi (she’s dating pop singer Cody Simpson after all), balancing college and modeling, and more.

StyleCaster: How’s your Fashion Week been so far?

Gigi Hadid: It’s been unreal, it’s been crazy. I started with the announcement that I was a Sports Illustrated Rookie. That was day one. Then I went to the AmfAR gala and walked in Desigual. My CR Fashion Book cover got released, and then today I opened and closed Jeremy Scott. That’s [why] my hair [looks wet] right now, it’s all conditioner.

I absolutely love it. It’s really fun for me. This is my first Fashion Week walking. I think it’s good that I don’t take it that seriously. I feel like when I have more fun with it, it shows as confidence. I try to make sure I’m having the most fun of all the models.

What was it like working with Carine Roitfeld and Bruce Weber on your CR Fashion Book spread?

It was absolutely incredible. I’ve never met two people—Carine and Bruce—who are such successful people, who are so down to earth, and lovely, and genuine. I just loved working with them. I can’t really talk about the shots yet, but it was pretty entertaining. You guys will see what I mean.

Everyone’s calling you the next big thing in modeling. Is that a lot a pressure?

I don’t believe them. I would feel pressure if I was like ‘Oh, yeah, I’m the next big thing.’ Honestly, I love anyone who’s saying that, but I’d never call myself that.

The paparazzi has even started following you. What’s that been like?

I’m dating someone who’s in the public eye, so I’m used to it around him, but it’s weird when people are there for me. I keep looking behind me like, ‘Uh, are you really here for me?’ It’s definitely kind of weird.

What advice did your mom give you about getting into this business?

First of all, she didn’t let me sign with an agency till I was 17, so I didn’t sign with IMG till then. [Before that] I was fighting her saying, ‘I want to work!’ and she kept saying, ‘Just have a normal childhood!’ Now I really appreciate that so much. I miss my volleyball team and my horses, and I am just so glad I was able to have those experiences and go to high school.

Any models whose career you really admire?

I think Kate Upton is incredible because regardless of what people thought about her [initially] she is now completely taking over—whether it’s commercial or high fashion—and is really proving that if you work really hard and show people what you’ve got, you can make it. I think she is just killing it. I have yet to meet her, but during Sports Illustrated release week I will, and I’m so excited.

What about milestones that you hope to check off in your career, like being a Victoria’s Secret model?

I would say Sports Illustrated, CR, Jeremy Scott. IMG is just making all of my dreams come true, and they are really enabling me to have new dreams every day. Yesterday or the day before I would have told you, ‘Oh my god, if Jeremy Scott would let me walk in his show I would die,’ and the next day my agent calls me and tells me, ‘Oh yeah, you’re going to a casting for Jeremy Scott.’

My agent especially, Luiz Mattos, believes in me a lot more than I believe in myself. He’s just helped me so much and is showing me that I can do more than I think I can.

Besides modeling, what else are you up to?

I live in New York and I go to the New School. I actually have class in like an hour. I’m studying abnormal psychology and I hope to focus on criminology and forensics. It’s a good place for me to get out of the industry when I just need a break. And no one in my classes knows what I do.