Best kind of co-parenting. Gigi Hadid just mentioned Zayn Malik amid her Leonardo DiCaprio dating rumors. The model posted a sweet birthday picture for her and the former One Direction member’s baby.

On September 19, 2022, Gigi posted a birthday cake for her little one, Khai, on her Instagram story. She captioned the story, “Our angel girl turned 2 today.” She tagged Carlos Bakery who made the Peppa Pig-themed birthday cake and she also tagged her ex-boyfriend Zayn Malik. It’s not known if Zayn was celebrating with the mother and daughter.

Gigi and Zayn dated on and off from November 2015 to October 2021. The couple had their baby Khai in September 2020.  A source told People on October 28, 2021, that Zayn and Gigi broke up as a result of his physical fight with Gigi’s mom, Yolanda. “They are not together right now. They are both good parents though,” a Hadid family friend said. “They co-parent. Yolanda is of course very protective of Gigi. She wants the best for her daughter and grandchild.” On Father’s Day 2022, Gigi posted a faceless picture of Zayn with Khai and wished him a “Happy Father’s Day.” 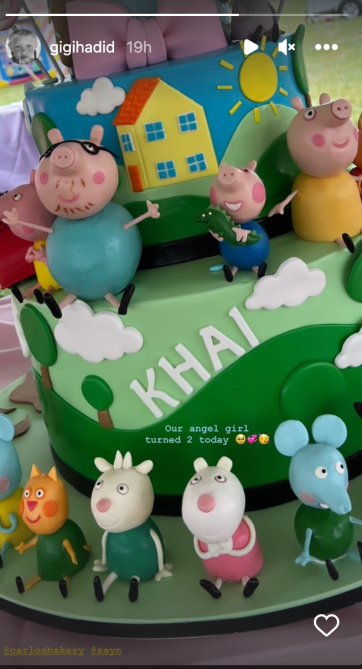 Amid her daughter’s birthday, Gigi is entangled with dating rumors with Leonardo DiCaprio. The two were speculated to be together after Leo broke up with Camila Morrone on August 29, 2022. Sources told E! News in an article published on September 13, 2022, that “Gigi and Leo have hung out multiple times and are into each other. Gigi thinks he’s a really cool guy. Majority of their hangouts have stemmed from being in the same social circles at various parties.” Another source told Page Six that “[Leo] is not someone who is in-and-out of relationships. He doesn’t jump around hooking up. They are taking it slow.”

A source confirmed to Entertainment Tonight on September 14, 2022, that Leo and Gigi are indeed “dating.” “Gigi and Leo are dating and into each other,” the insider said. The model and Don’t Look Up actor were spotted together at Casa Cipriani in New York City on September 10, 2022, where they “looked very flirty.” “They were sitting in the dining room area and were canoodling and having a fun night out with each other,” the source said.

Believe Me by Yolanda Hadid

For more about the Hadids, read Yolanda Hadid’s 2017 book, Believe Me: My Battle with the Invisible Disability of Lyme Disease
. In the memoir, Yolanda opens up “in a way she’s never been able to in the media before” about her famous children—Gigi, Bella and Anwar—and how her “perfect marriage” to their father, Mohamed Hadid, ended in divorce. The book also follows Yolanda’s battle with late-stage Lyme disease, a bacterial infection that attacks one’s nervous system, after years of struggling to get a diagnosis. Yolanda, who also includes her time on The Real Housewives of Beverly Hills in the book, calls the memoir an “inspiring lesson in the importance of having courage and hope.”