First Halloween. Gigi Hadid posted her first photo of her baby with Zayn Malik. The model took to her Instagram on Saturday, October 31, to share a picture of her, her boyfriend and their baby daughter, whose name hasn’t been revealed yet.

The picture saw Hadid dressed as Zero Suit Samus from the Metroid Prime video game franchise; Malik dressed as Professor Severus Snape from the Harry Potter series; and their daughter dressed as the Hulk from the Marvel comic books. Though Hadid and Malik’s baby’s face is covered with a Hulk GIF and a green hat, fans have noticed that the baby has blonde hair (much like her mom), which is visible in the photo. Hadid announced the birth of her and the former One Direction member’s child in September with a black-and-white picture of the couple holding their newborn’s hand. “Our girl joined us earth-side this weekend and she’s already changed our world. So in love🥺💕,” she wrote at the time.

Malik shared a similar photo on his Instagram of baby Zigi holding his tattooed hand. “Our baby girl is here, healthy and beautiful🙏🏽❤️ to try put into words how i am feeling right now would be an impossible task. The love I feel for this tiny human is beyond my understanding. Grateful to know her, proud to call her mine, and thankful for the life we will have together x,” he wrote. 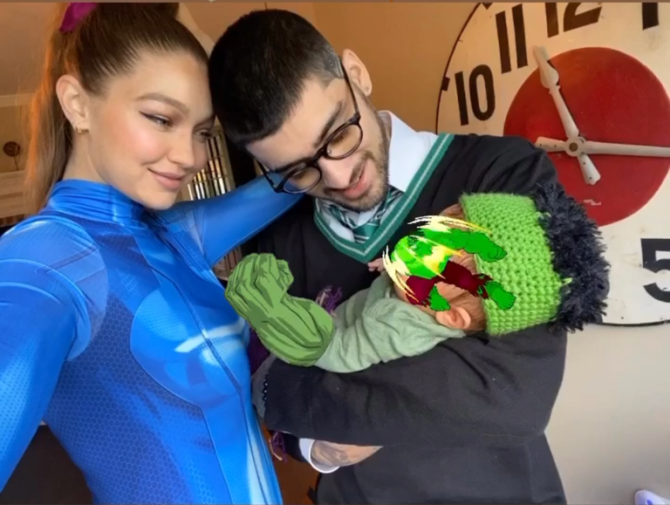 Hadid—who has been dating Malik on and off since November 2015—confirmed her pregnancy in an interview on The Tonight Show Starring Jimmy Fallon in April. “Thank you so much!” she said when Fallon congratulated her on her baby. “Obviously, you know, we wish we could’ve announced it on our own terms, but we’re very excited and happy and grateful for everyone’s well wishes and support, so thank you.”

The late-night talk show host then gave the model some parenting advice and encouraged her “be present for every part” of her child’s life. “Yeah, no I’m trying,” Hadid said before describing how she and Malik have been social distancing. “And especially during this time, it’s a nice silver lining to be able to be home and together and really experience it day by day.”