Gigi Hadid has broken her silence on accusations that she wore blackface on a recent magazine cover for Vogue Italia. On Thursday, a day after Vogue Italia unveiled its cover, Hadid took to her Instagram story to explain that her skin digitally darkened the photoshoot and that she wasn’t aware to the degree that it would be darkened.

To show that her skin looked different at the photoshoot than on the cover, Hadid posted a picture of her walking home after the photoshoot. The picture shows her with significantly lighter skin that doesn’t match the shade on Vogue Italia‘s cover.

On top of the photo, Hadid wrote an apology to fans who were offended by her darkened skin. She explained that she had zero control over the creative direction of the photoshoot and that she wasn’t aware of how she looked on the cover until it was released. “This is a photo of me returning home from shooting my Italian Vogue cover on April 3rd… you can see the level I had been bronzed on set that day. Please understand that my control of the shoot 1. is non existent in terms of creative direction 2. ends completely when I leave set, and anything else done to a photo in post is out of my control fully,” she wrote.

Though Hadid admits that she knew that her skin would be bronzed on the cover, she wasn’t aware to the degree that it would be darkened. “The bronzing and photoshop is a style that S.Klein has done for many years, and I believe was what was expected from the shoot (to show me in a different way creatively), BUT, although I understand what Vogue Italia’s intentions were, it was not executed correctly, and the concerns that have been brought up are valid,” she wrote.

Hadid ended her statement by assuring fans that the cover would look different if she was in control. She left her followers with message on the importance of representation in fashion, and how it wasn’t her intention to take away opportunities from darker skinned models.

“I want to address this for those who were offended by the editing/retouching/coloring of the cover. Please know that things would been different if my control of the situation was different,” she wrote. “I want to apologize because my intention is never to diminish those concerns or take opportunities away from anyone else, and I hope this can be an example to other magazines and teams in the future. There are real issues regarding representation in fashion — it’s our responsibility to acknowledge those issues and communicate through them to work towards a more diverse industry.”

Gigi Hadid‘s magazine covers are usually a cause for celebration. The 23-year-old model always looks impeccably styled, artfully posed, and like a real supermodel should. But Hadid’s recent magazine cover for Vogue Italia‘s June issue isn’t earning praise. Instead, it’s feeling the wrath of the internet for what some are calling extreme Photoshop and blackface.

On Wednesday, Hadid revealed her Vogue Italia cover on Instagram. The picture featured the older Hadid sister sitting on a male model’s lap with a crown and a Queen of Hearts-printed jumpsuit. But it wasn’t Hadid’s eye-catching outfit that caught the internet’s attention. It was her significantly darker skin color and noticeably different facial features.

Immediately, the model was flooded with Instagram comments accusing her of wearing blackface and darkening her skin for the photoshoot. Hadid was also accused of approving of Vogue Italia‘s Photoshop, which many believe was responsible for her different-looking face. Comments ranged from people thinking that Hadid looked like a “completely different person” to others who pointed out her attempt at blackface. 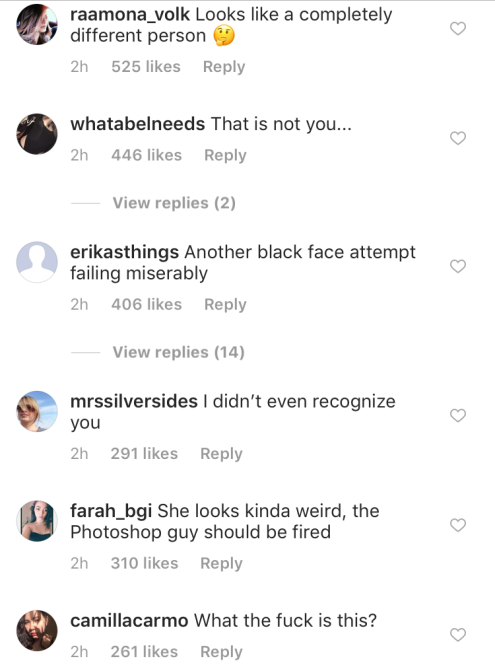 MORE: 15 Times Celebrities Were Accused of Photoshop on Instagram

Several Twitter users also pointed out that Hadid has been accused of blackface before. In 2015, Hadid posed for Vogue Italia‘s cover again, where she wore blue curly wig and darker-than-usual skin. Many critics brought up the cover as evidence that Vogue Italia and Hadid have a history of darkening her skin. Some even called out Vogue Italia‘s hypocrisy in releasing an all-black issue in 2008 calling out the fashion industry’s diversity problem, yet purposefully darkening Hadid’s skin.

MORE: 16 Celebrities Who Have Posed Without Makeup for Magazine Covers

As of yet, neither Hadid nor Vogue Italia has responded to the controversy. Likewise, many of Hadid’s fans and supporters have defended her, arguing that her different skin color isn’t an attempt at blackface but an overly dark tan. See the photos and make a decision for yourself.