Online beef. Gigi Hadid called out Kanye West on Instagram. The model commented on the DONDA artist’s Instagram after he called out a journalist who criticized his “White Lives Matter” themed clothing.

Gabriella Karefa-Johnson, a stylist and global Vogue contributing editor, claimed that Kanye’s message of “White Lives Matter” during his Paris Fashion Show was “dangerous.” In an Instagram story, she said, “I guess I get what he tried to do— he thought it was duchampian. It wasn’t. It didn’t land and it was deeply offensive, violent and dangerous. Kanye responded to her story through cryptic Instagram posts by saying that Karefa-Johnson “is not a fashion writer” and proceeded to say “You speak on Ye Ima speak on you Ask Trevor Noah.”

In a screenshot of a conversation with his friend Mowalola that he posted on Instagram, Mowalola told the “Heartless” rapper that he “shouldn’t insult the writer” and that he “could actually have a conversation about the tee.” On his Instagram post, Gigi commented, “You wish u had a percentage of her intellect. You have no idea haha…. If there’s actually a point to any of your shit she might be the only person that could save u.” She continued defending her close friend and collaborator, “As if the “honor” of being invited to your show should keep someone from giving their opinion ..? Lol. You’re a bully and a joke.” 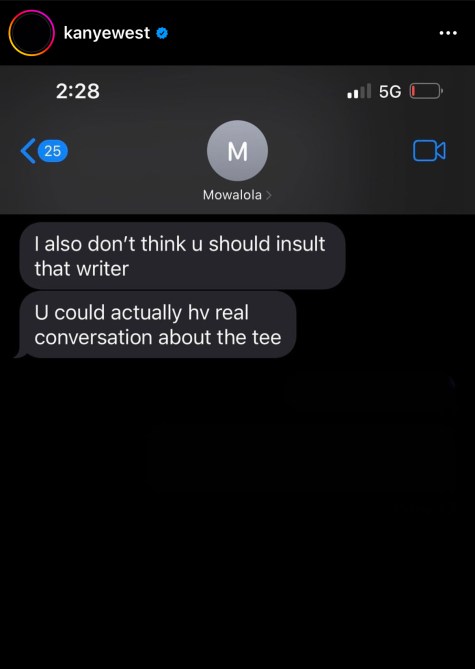 Kanye continually used Instagram as a platform to call out people who are close to him. About a month ago, Ye posted multiple screenshots of a conversation on Instagram presumably with Kim about their kids: North, 8, Saint, 6, Chicago, 4, and Psalm, 3. Kanye argued that their kids should go to his new Donda Academy, but the person asked him to “stop.” Kanye replied, “No, we need to talk in person, you don’t have a say so of where the kids go to school. Why you get say say? Cause you half white?” The conversation continued and the person relayed a message from Kris where she said, “Tell him to please stop mentioning my name. “I’m almost 67 years old and I don’t always feel great and this stresses me to no end.”

In 2018, Ye first shared that he had been diagnosed with bipolar disorder in his album, Ye. He described to David Letterman during an interview in 2019 how his mental health, particularly a manic episode, influences his behavior. “When you’re in this state, you’re hyper-paranoid about everything, everyone,” Ye said. “This is my experience, other people have different experiences. Everyone now is an actor. Everything’s a conspiracy. You feel the government is putting chips in your head. You feel you’re being recorded. You feel all these things.” He added that not taking his medication regularly can lead to “erratic” actions. “If you don’t take medication every day to keep you at a certain state, you have a potential to ramp up and it can take you to a point where you can even end up in the hospital. And you start acting erratic, as TMZ would put it,” he said, referencing the tabloid news outlet where he made an impromptu visit in 2018.

If you or someone you know is seeking help for mental health concerns, visit the National Alliance on Mental Illness (NAMI) website, or call 1-800-950-NAMI(6264). In an emergency, contact the National Suicide Prevention Lifeline at 988 or call 911.