It’s officially Fashion Week in New York City and fashion’s best and brightest have descended on the city for a few days of shows, presentations and parties. And no Fashion Week would be complete without at least a few surprise runway appearances, right? This season was no different, of course, and Gigi Hadid just did her first New York Fashion Week strut of the season at the Proenza Schouler Spring/Summer 2022 show. No surprise here, the mom of one looked incredible!

And If you’re thinking Wait, didn’t Gigi Hadid already walk a runway after giving birth? The answer is yes, yes she did. The eldest Hadid sister officially returned to the runway after giving birth to her daughter, Khai when she appeared in the Versace fall 2021 fashion show way back in March of this year. However, today I’m talking about Hadid’s return to the New York Fashion Week runway, because yes, it was that good!

Proenza Schouler’s Spring/Summer 2022 show, which took place on New York City’s newly-opened Little Island, was chock-full of bright colors and vibrant prints that will have you dreaming of a time when you can jet off on your next tropical vacation.

Jack McCollough and Lazaro Hernandez—the designers behind Proenza Schouler’s line of effortlessly cool pieces—created a collection that featured fringed dresses, sporty bike shorts and zebra-printed jackets, striking a happy medium between the way you may have dressed at the beach as a child and the way you want to dress now as an adult in a post-pandemic world: Playful yet expertly tailored. 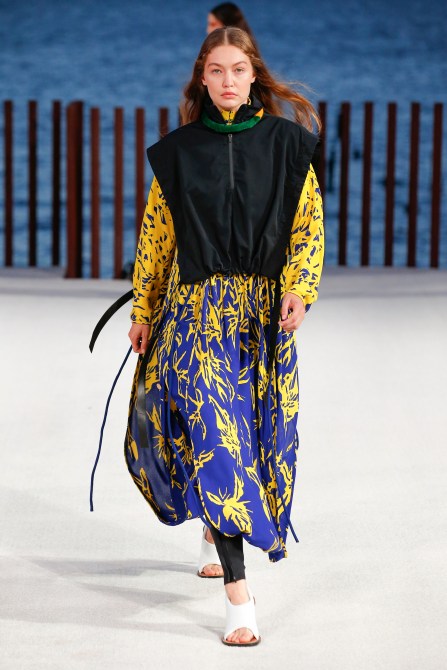 Attendees were thrilled to see a star-studded model lineup and Hadid’s look consisted of a royal blue and yellow abstract-printed long-sleeved midi dress, layered underneath a sporty, slightly boxy black vest. Underneath was what looked to be a pair of black cropped leather leggings, keeping with the sporty-chic vibes.

Her accessories included a Kelly green and yellow circular necklace and a pair of white leather sandals. If a chunky hiking-inspired chunky flat sandal was the it-shoe silhouette in 2021, Proenza Schouler makes a strong case for this slightly sleeker alternative in 2022. The flat sandal isn’t going anywhere—it’s simply losing its platform and becoming even flatter!

As for the show’s beauty looks, McCollough and Hernandez enlisted the help of hairstylist Guido Palau to create modern beachy waves full of lived-in texture, along with a few iterations of sleek low ponytails and box braids. Hadid’s hair fell into the former category. It flowed out behind her as she walked as if she was on the street rather than on a high-profile runway show.

The makeup look on the majority of the models—including Hadid—was equally effortless. Makeup artist Diane Kendal kept the skin feeling fresh, complete with bronzed cheeks and strong, statement-making brows. However, in a break from tradition, Kendal swiped a few pops of neon across the eyelids of several of the models.

In short, Hadid couldn’t have picked a better time to make her reappearance at NYFW. I just love seeing her on the runway doing her thing! The New York native was bound to show up sometime, after all—it simply wouldn’t have been Fashion Week without her.