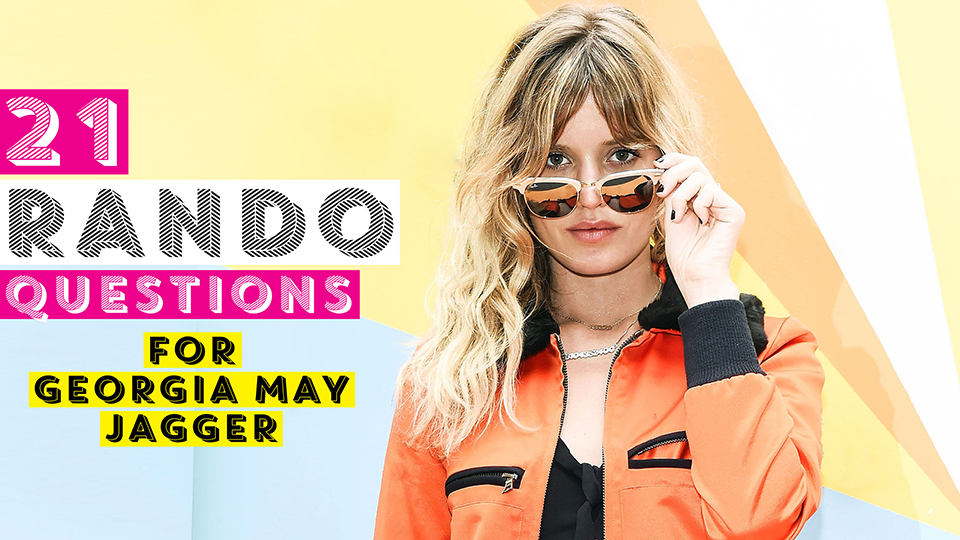 It’d be easy to think you already knew Georgia May Jagger before ever really meeting her. After all, she has one of the most recognizable last names in the biz (more so than even Jenner, perhaps?), and her blonde waves and killer cheekbones instantly call to mind her mom, Jerry Hall.

But Jagger is way more than just her A-list genetics, as she’s proven time and time again in the past eight years since making her modeling debut. She’s got London cool-girl style down to a T, that signature shaggy blonde ‘do, and an inner circle of musicians and It Brits. So, naturally we jumped at the chance to catch up with the Sunglass Hut spokesmodel at the brand’s recent Shades of You event—and it turns out there was plenty we didn’t know about the 24-year-old, from her weird pet peeves (whatever you do, don’t give her a banana backstage) to her one body hangup. Read on for her answers to our ongoing 21 Random Questions survey:

My middle name is Ayeesha. Georgia May is acually my first name.

What would your last meal on earth be?

It changes all the time, but I love Vietnamese food, so maybe that would be it. I like bun, I like pho—I like really spicy things, basically.

The smiley poo or eggplant.

What’s the last thing you bought?

Your idea of happiness?

Being with family, enjoying nature—all the things that we probably take for granted and don’t do as often as we should.

Your idea of hell on earth?

New York in July—it’s hot as hell. Either that or bananas. It’s strange: I don’t mind banana bread, but I can’t stand when someone leaves a banana peel on the table and then I have to clean it up. It’s the only only food I’m weird about.

I don’t know—shit? Fuck? All of them?

Favorite piece of clothing you own?

I like all the ones that are really bad—salted caramel, Snickers where its got bits of stuff in it—not, like, pistachio or anything. Oh, I do like hazelnut, though.

If you could change one thing about your appearance, what would it be?

I’ve got quite wide feet, so wearing high heels is really difficult, but other than that I don’t think I’d really change anything.

I try to give everyone the benefit of the doubt and not be too judgmental.

What’s something, in general, you find really, really annoying (other than bananas)?

When my boyfriend bites his nails really loudly while we’re watching a movie. I love everything else he does, but that’s my pet peeve. I used to bite my nails, so it reminds me of that and makes me want to bite my nails.

How did you kick the habit?

How do you take your coffee?

Favorite movie of all time?

I really like old movies, like “The Red Shoes,” or anything in like really amazing technicolor. I love Mae West films—she was a big idol of mine growing up. I kind of grew up like I was growing up in the ’50s, as far as my pop culture tunnel vision, you know what I mean?

If you could come back as one person, living or dead, who would it be?

Either Jimmy Hendrix or Prince—I’d love to play guitar like that.

What was your first concert?

Other than the Rolling Stones, I think it was Madonna’s Ray of Light tour. I was maybe eight and I went with a friend and her parents.

Quick: What’s the first word you associate with Justin Bieber?

Should Carrie have ended up with Aidan or Big on Sex and the City?

I think Aidan. I always liked Aidan, and I was never that down for Mr. Big—I don’t know why.