Gemma Chan first heard the words Crazy Rich Asians about five years ago, when her sister recommended Kevin Kwan’s book as a vacation read. “I was immediately suspicious of the title,” says Chan. “I thought it was some grotesque, stereotype story.” Hesitant, she took the book—a bestselling rom-com about an American professor whose boyfriend is heir to one of Singapore’s wealthiest families—and by the time her holiday was over, she had devoured it from cover to cover. “I fell in love with all these characters,” Chan says. “I remember thinking at the time, This could make a great movie.”

She wasn’t the only one who thought so: Two years later, Chan’s agent called, asking if she was interested in auditioning for an upcoming Warner Bros. movie by the same title based on Kwan’s book—and the first Hollywood studio production in 25 years to feature an all-Asian cast and Asian-Americans in its lead roles. This time, there was no hesitation. Chan was all in. 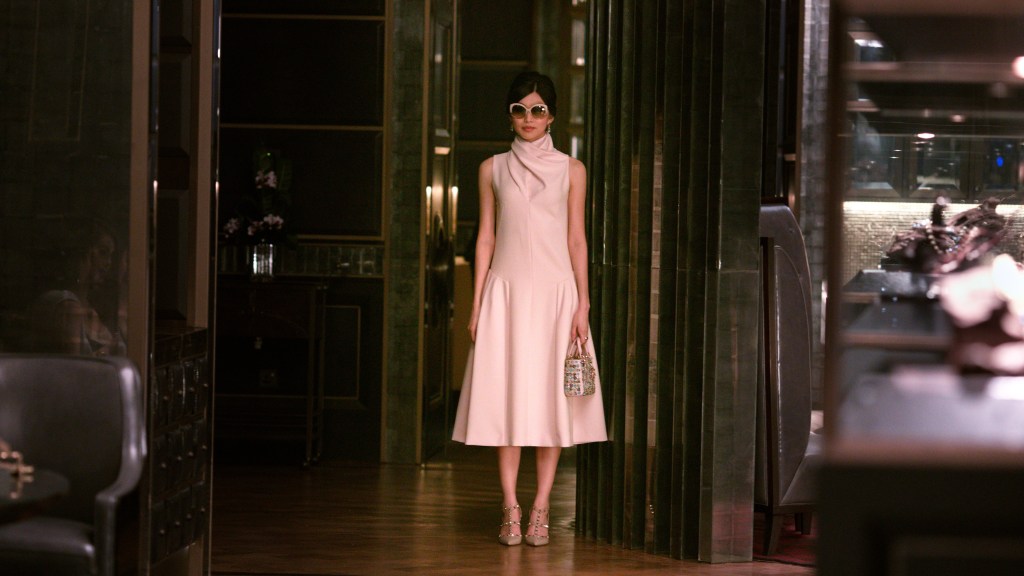 Raised in a London suburb, Chan, the daughter of a Chinese-Scottish mother and a Macanese-Hong Kongese father, didn’t dream of becoming an actor as a kid. “I never realized that it was an actual, viable career,” Chan says. “Partly because I never saw faces that looked anything like mine or my family’s on TV in the UK.” Though she dabbled in drama in school, Chan’s sights were set on law due to the “encouragement and guilting” of her parents. After graduating with a law degree from the University of Oxford, Chan received an offer from a big-name London firm. But something felt off. “I was kind of forced to face the fact of what my future would be,” Chan says. “I came to the realization—which I knew in my heart of hearts—that I would have made a miserable lawyer.”

I feel like I’ve been waiting for this film my whole life.

So, secretly, Chan applied to the London Drama Centre, the most competitive drama school in the UK. She got in, but dreaded the time she had to tell her parents. “It went down about as well as you might expect,” Chan says. “My dad said, ‘It doesn’t matter how good you are. It doesn’t matter how talented you are. How many Asian faces in TV and film? You won’t find enough work. You won’t be able to make a living.’” 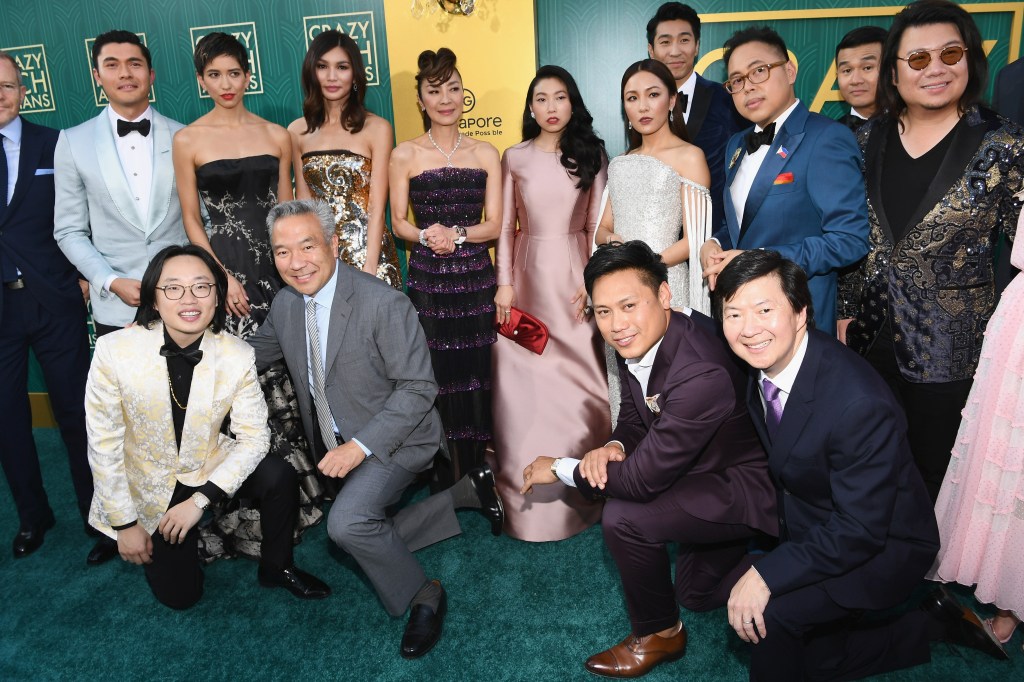 Though her parents eventually came around, Chan’s worry about finding enough work as an Asian-British actor remained. “When I left drama school, the first thing I was told was that I would struggle,” Chan says. “Because a majority of the UK’s output, drama-wise, is period drama, and I would never get a chance at that.”

Those predictions were true. Few opportunities came her way, and when Chan did have a chance to audition, the roles were often for Asian stereotypes. “There’s been a history of Asian characters and Asian female characters in films being oversexualized or to a certain extent, fetishized,” Chan says. Though she might not agree to play some of the characters she did earlier in her career now, Chan has no regrets and empathizes with other struggling Asian actors who take roles they might not be comfortable with to pursue a career in Hollywood. “There are some parts at the beginning of my career that might be appraised now,” Chan says. “But you have bills to pay. That’s something I’m not going to judge another actor on because they have to survive.”

My dad said, ‘It doesn’t matter how talented you are. How many Asian faces in TV and film?’

Though the fetishization of Asian women on screen has diminished somewhat, there’s still an unfortunate pattern of casting Asian actors and other actors of color as supporting characters or “best friends” to white leads. “It was so rare that I would be seen for the lead part,” Chan says. “It’s still pretty rare, to be honest. I would be seen as the number-two, number-three, number-four role. Always a supporting part. It’s very rare to have a story that’s centered around not just an Asian but a minority. It definitely sent a message.”

After graduating drama school, Chan went on to score roles in BBC’s Doctor Who, Warner Bros.’s Fantastic Beasts and Where to Find Them and Channel 4’s Humans, a sci-fi where she spent three seasons playing a robot. But none of them compared to Crazy Rich Asians, an opportunity that came about a couple years ago, in between seasons of Humans.

It’s rare to have a story that’s centered around not just an Asian but a minority.

Originally, Chan was asked to audition for the film’s lead, Rachel Chu, a Chinese-American economics professor who travels to Singapore to meet her boyfriend Nick Young’s family, unaware that he’s the heir to one of the country’s wealthiest households. But Chan couldn’t see herself as Rachel. Her sights were set on Astrid Leong Teo, Nick’s impossibly beautiful cousin whose life looks glamorous from the outside, but inside, her marriage is crumbling. “Everybody thinks that this character has the perfect existence and the perfect marriage and the perfect life,” Chan says. “But she really is someone who is struggling to hold everything together.”

After fighting to read for Astrid, Chan sent in a tape from London, and things quickly snowballed. She flew to Los Angeles to meet with the film’s director, Jon M. Chu, and producer, Nina Jacobson. Shortly after, while she was home in London before Christmas, Chan received a call from her agent, telling her that she booked the part.

Since its inception, Crazy Rich Asians has been praised for its all-Asian cast, featuring actors from Malaysia, China, Singapore, the Philippines and more. The film is the first Hollywood studio production since The Joy Luck Club in 1993 to feature Asian-Americans in lead roles, an achievement that isn’t lost on Chan. “I’m very used to going to work and being the only Asian in the cast,” Chan says. “And not just the only Asian—often, I’m the only person of color in the cast.”

I’m very used to going to work and being the only Asian in the cast.”

But there’s even deeper significance to why Crazy Rich Asians is such a breakthrough film for Asians. From characters who are outlandish and ridiculous to those who are heartbroken and flawed, the film, for Chan, showcases the range of Asian personalities she has always known but never seen represented on screen. “The biggest misconception about Asians, in general, is that there is one type of Asian,” Chan says. “Our film showcases how much diversity there is within Asian culture. Asia and Asians and the Asian ethnicity aren’t a monolith. What I love about this film is that you have a whole cast of fully dimensional characters who happen to be Asian.”

As excited as she is to be part of such a groundbreaking movie, Chan’s mission to highlight Asian talent doesn’t end on screen. Since she began her Crazy Rich Asians press tour in July, Chan has used her platform to celebrate Asian designers and brands, including Prabal Gurung (Nepalese-American), Joseph Altuzarra (Chinese-French) and Hanako Maeda (Japanese-American). “I told my stylist, ‘I want the fashion of this press tour to reflect the value of our film,’” Chan says. “So we put together the looks in the spirit of inclusiveness and diversity, and I was really keen to use this opportunity to spotlight Asian creativity in particular.”

Asia and Asians and the Asian ethnicity aren’t a monolith.

Though the early reviews of Crazy Rich Asians have been mostly positive, some have criticized Astrid’s storyline in the film. The Los Angeles Times called Astrid’s deteriorating marriage “tepid melodrama,” while the New York Post compared her to a “Real Housewife of Singapore.” It’s a criticism that Chan doesn’t necessarily agree with. Though Astrid might not be as sharp-tongued as Nick’s mom, Eleanor, or as brazenly confident as Rachel, that doesn’t mean she isn’t strong. Chan believes all three of the film’s leading women are powerful in their own ways. “What you see in this film with Astrid and Eleanor and Rachel, you see these strong, fully drawn, complex female characters, as they should be,” Chan says. “They really are agents in the changes of their own lives. They don’t need rescuing. They rescue themselves.”

With an appearance in Focus Features’ Mary Queen of Scots in December and a secret role in Marvel’s Captain Marvel next year, Chan’s career is just getting started, and picking up steam quickly. (“Marvel would kill me,” Chan says when asked about her role in Captain Marvel, teasing that the character is “very different” from who she plays in Crazy Rich Asians.) But right now, her focus is on Crazy Rich Asians.

Ultimately, Chan has two hopes for the movie: She wants audiences have fun, like they’re supposed to when watching rom-coms. But also, and more importantly, she hopes that the movie leads to positive progress and conversations in the entertainment, cultural and political spheres and changes how Asians are seen in Hollywood and everywhere else. The transformation might not be immediate, but Chan is confident that Crazy Rich Asians is a (big) step in the right direction.

My biggest wish for Crazy Rich Asians is that boys and girls see it and feel like they’re worthy of being at the center of their own story.

“I never would have dreamed that a film like this would happen 10 years ago or even five years ago,” Chan says. “Growing up, watching stories and never seeing anyone who looked like you at the center of their own story, you absorb that. One of my biggest wishes for this film, Crazy Rich Asians, is that young boys and girls see it and feel like they’re worthy of being at the center of their own story.”