Fair warning—plenty of spoilers ahead! Season 8 of HBO’s hit series Game of Thrones is wrapping up this weekend. The 80-minute finale is only two days away. Fans are still reeling from last week’s brutal turn of events. This Varys Game of Thrones theory explains why he took his ring off at the beginning of Episode 5. Remember when Dany would say “Dracarys” and we were like “HELL YEAH GIRL you get ’em!!” Well, um…that’s over now. And Daenerys’ first “Dracarys” of the episode brought an end to one of the longest surviving characters—Varys. While there are many, many questions from “The Bells,” we can’t help but wonder what the significance was of showing Varys taking off his ring just before his execution. Time is money so there has to be a reason the producers wanted that shot in there, just before his death at the hands of the newly ~Mad Queen~.  Is that a thing? Perhaps you’re supposed to take your jewelry off before dying by fire? But it seemed too intentional to just throw in there without a purpose.

There was a theory circulating that Varys was in the process of trying to poison his queen, which would explain why he and that little girl were in cahoots about getting into the kitchen. “We’ll try again at dinner,” Varys told Martha, the young child who said Dany’s guards were watching her. Definitely seems suspect. Now, Buzzfeed has come up with a great theory about Varys’ ring, and it actually relates to the poison theory. Jewelry has been used throughout the show to poison people. You’ll remember when that cunning Olenna used a poisoned stone from the Little Bird’s necklace to kill Joffrey…it’s why Cersei was convinced Sansa had done it herself! So sneaky, Olenna.

Buzzfeed is convinced we will see that ring again, and we’re starting to believe it! Varys placed the thin, jeweled ring very carefully in his room. So perhaps it will return in Episode 6. It could just be there, ready and waiting for someone to pick it up and take out the Mad Queen once and for all!

Perhaps Tyrion knew of the plan and that’s what he was referring to when he told Dany that someone had betrayed her. We assumed he was talking about the discussion he had with Varys, which Tyrion deemed “treasonous.” But perhaps he knew about the poisoning plan. That would explain why he felt the strong need to go forward. And then he is such a good guy that he wanted to be sure Varys knew it was him.

Anyway—now Tyrion is most definitely not on Daenerys’ side. Not after “The Bells.” 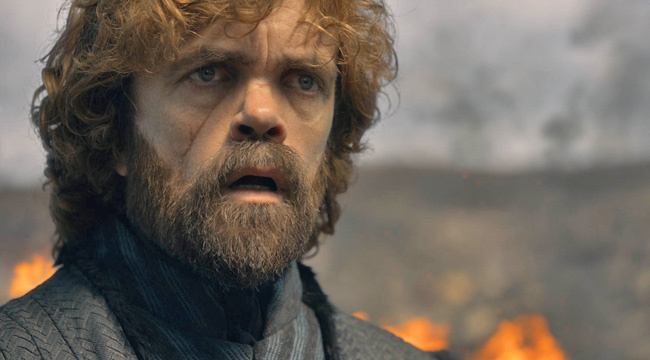 So if he does know about that ring, Tyrion might be the one to kill her! That would be kind of poetically tragic, don’t you think? Tyrion takes Dany’s life. Probably Drogon would kill Tyrion. And then someone would have to kill Drogon. Anyway—too many theories. Basically, we’re keeping an eye out for that ring this Sunday.