Game of Thrones is about to be over forever–and we’re not even sure how to process it. From the moment we were introduced to The Bastard of Winterfell back in Season 1, we were enchanted. Now, these Game of Thrones death theories about Jon Snow have us believing that it might be all over for our dark-haired bae–again. Jon is the king of trying to do the right thing. From the beginning, he has tried to follow in his father’s footsteps, but his obsession with truth and the facts have put him in hot water more than once.

Now, Jon is going to have to make some really tough choices or watch his entire world crumble around him. Since the beginning of Season 8 of GoT–Jon’s sister, Sansa, has been warning him about his power-hungry boo, Daenerys Targaryen. From the moment Dany dragged her Unsullied and her Dothraki into Winterfell, Sansa clocked her for the tyrant that she is. However, Jon has been unable to see her evil ways because he’s in love with her.

However, now that Jon has revealed his true identity–Aegon Targaryen–to his lady love (which she took very badly), and he’s watched her burn all of King’s Landing to the ground, it’s time for him to take some real action. If he doesn’t get it together really quick, we’re going to be declaring that his watch has ended by the time the series finale concludes. 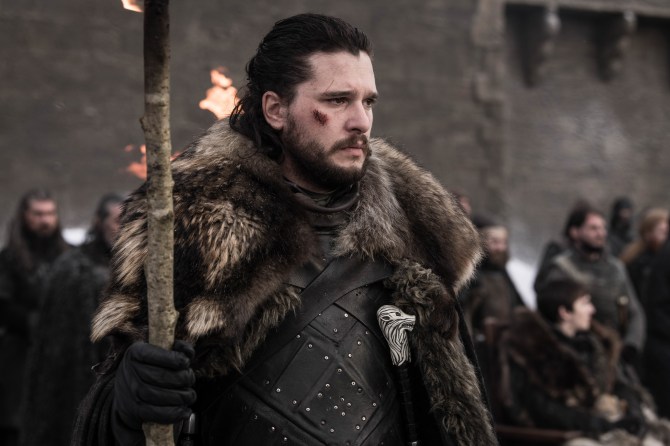 Jon’s fate is tied to Ghost and Rhaegal

If you’ve been paying close attention to GoT from the beginning, then you’ll notice that the fate of the Stark children seems to be directly tied to their direwolves. Robb Stark and his direwolf, Grey Wind were murdered by the Freys in Season 3. Ayra Stark’s direwolf Nymeria has been wandering around Westeros just like Ayra, and it’s been a rough road for Sansa since her direwolf, Lady was put down in Season 1.

But what about Jon’s direwolf, Ghost, the white wolf that Jon was given? The folks at Comicbook.com explained, “In ‘The Last of the Starks,’ Jon sends Ghost away to live in the ‘True North’ alongside Tormund Giantsbane and the rest of the wildlings.”

Ghost isn’t the only animal associated with Jon that we should be concerned about. He was also tied to Dany’s dragon, Rhaegal. At least up until Euron Greyjoy blasted the beautiful beast out of the sky.

Rhaegal—Dany’s dragon, named after Jon’s father (Dany’s brother), Rhaegar. He became Jon’s personal steed during the battle against the Night King and looked like he would be the true spirit animal Jon was connected to. In ‘The Last of the Starks,’ Rhaegal is shot out of the sky and killed by Euron Greyjoy and the Iron Fleet.

Could the fate of the animals closest to Jon be foreshadowing his own destiny?

Jon could sacrifice himself

So we absolutely think that Jon Snow is Azor Ahai aka The Prince That Was Promised. The prophecy is as follows,

Azor Ahai is a legendary hero who is said to have brought an end to the Long Night, the first great war against the dead. According to the prophecy, Azor Ahai will be reborn to deliver the world once again from danger and would ultimately cause death itself to bend its knee. This savior will supposedly be reborn amidst smoke and salt, wake dragons out of stone, be born when the stars bleed, and draw a burning sword, called Lightbringer.

However, there is a slight catch. In Season 7, Missandei revealed that the ancient reading of the Azor Ahai prophecy could actually be wrong. Prince could also mean Princess. We all know that Jon is all righteous and what not, so there is a possibility that he isn’t Azor reborn and if he feels like someone else is the Prince or Princess That Was Promised (just hopefully not Dany), he could very well sacrifice himself.

UGH, it was most Jon Snow ending ever.

Dany could come could for Jon’s head–literally

So after witnessing Dany’s actual meltdown in the second to last episode of Game of Thrones–“The Bells” we know that she more than capable of anything. The alleged Breaker of Chains literally massacred innocent people because she let her temper get out of hand. We already know that she’s pissed at Jon for revealing his true identity to his siblings (even though it was poor Varys who got barbequed as a result), but that doesn’t mean Jon isn’t next on the chopping block.

Dany has clearly moved past being reasoned with, and if the vision she had in the book version of the House of the Undying is correct, then we’re going to have to say RIP to Jon. Dany’s prophecy said,

We’ll just have to wait for the series finale to see of Jon survives and at this point, we wouldn’t even put our money on him.