Game of Thrones has just said goodbye forever, and while many fans are disappointed by the outcome–the Game of Thrones finale meaning is as clear as day if you think about it. Despite everything that has happened throughout the past eight seasons on Game of Thrones–the show has really come full circle, and this was showrunner/creators David Benioff and D.B. Weiss’ plan all along.

Though the series has long since passed the timeline of George R.R. Martin’s A Song of Ice and Fire series, D&D met with the novelist back in 2013, to discuss how they were going to bring their HBO epic to a close. The showrunners explained that Martin gave them “three holy sh– moments.” Those moments were the death of Shireen Baratheon, the meaning of Hodor’s name, and one final twist “from the very end.” However, they have vowed never to reveal which aspects of the series finale came from them and which parts came from GRRM.

Though most fans were underwhelmed by the finale, if you consider the foreshadowing in the books and on the show, both Daenerys Targaryen’s turn as the Mad Queen and Jon Snow’s choice to return to The Wall and pay for his perceived sins have always been swirling around the series.

To begin with, most fans always predicted Dany’s death at Jon’s hand–however, many of us thought it had to do with the Azor Ahai prophecy.

Azor Ahai is a legendary hero who is said to have brought an end to the Long Night, the first great war against the dead. According to the prophecy, Azor Ahai will be reborn to deliver the world once again from danger and would ultimately cause death itself to bend its knee. This savior will supposedly be reborn amidst smoke and salt, wake dragons out of stone, be born when the stars bleed, and draw a burning sword, called Lightbringer. 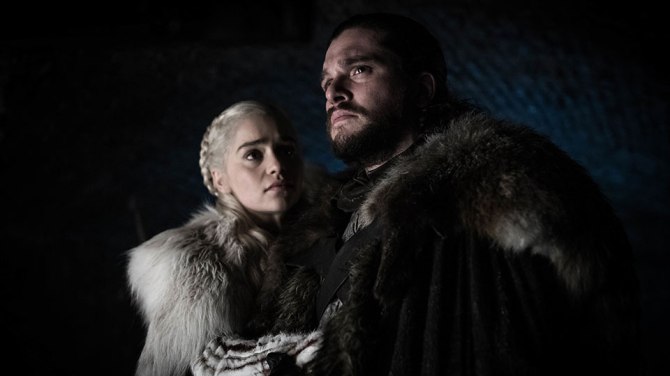 We thought Jon was The Prince That Was Promised and that he was going to kill Dany in order to save the world from the Night King. But, when Arya shoved her dagger into the Night King’s heart in Season 8, Episode 3–that prophecy died.

Perhaps as a tool to trick fans, D&D chose to still kill Dany by Jon’s hand but make his motive much more nuanced.

Jon’s fate in the end, including his return to The Wall to be with the Wildings, wasn’t as obvious. Still, his path was always mapped out. He always felt a great amount of guilt for battling the Wildlings in the Battle for Castle Black. After all, he lost Ygritte (his first love) during the battle. If you recall, during his time at Castle Black with Maester Aemon Targaryen is when Jon learned some of his biggest life lessons. After all, it was Aemon who told him:

Jon, did you ever wonder why the men of the Night’s Watch take no wives and father no children? So they will not love, for love is the bane of honor, the death of duty. What is honor compared to a woman’s love? What is duty against the feel of a newborn son in your arms … or the memory of a brother’s smile? Wind and words. Wind and words. We are only human, and the gods have fashioned us for love. That is our great glory, and our great tragedy.

Jon repeats this lesson in the series finale.

In the end, Jon would have to choose duty and honor over the woman he loved. After all more than any of the Stark children, it was Jon who was most like their father, Ned Stark. Ned’s devotion to honor and duty cost him everything.

Jon felt that Dany swore an oath to honor the people of the Seven Kingdoms–when she refused to uphold that duty, he executed her for it. Her death by Jon mirrored Jaime Lannister’s execution of Dany’s father and Jon’s grandfather Aerys Targaryen aka The Mad King. Jon did what he had to do because it was the right thing–not because he wanted to.

Jon Snow–or Aegon Targaryen was never playing the game of thrones, so he could never win it.