Just to be clear—there are *multiple* spoilers ahead. So please turn around if you are not ~fully~ caught up on the eighth and final season of HBO’s hit series, Game of Thrones. Great. SO. This Game of Thrones white horse theory about Arya Stark has us truly shooketh. First of all, the fifth episode of GOT was truly insane. And honestly? We were warned. We were warned numerous times, even by Emilia Clarke herself. But we all wound up looking just as shocked as Tyrion and Jon watching Daenerys burn the city to the ground. (Just like her father wanted!). One slightly unrealistic aspect of the episode though was honestly the fact that Arya survived. Like—how out of every single person in King’s Landing did our Night King slayer survive? With Dany Mad Queening-out and Drogon’s never-ending supply of fire, we were pretty sure we were going to lose nearly every character who stepped foot in King’s Landing. But not little Arya! She woke up ALONE covered in ash with burned bodies literally all around her. Found a white horse in the middle of all the wreckage, mounted it and rode off into the sunset. OK—well, it wasn’t happy or anything. But still, it seemed to work out *very well* for her. This fan theory, though, suggests that maybe GOT is playing a little trick on us. Fans are convinced that Arya is secretly dead.

In the beginning of episode five, we saw that white horse die. The Golden Company was the first line of defense against the Unsullied. But they died real quick. And it seemed like the beautiful white steed did as well. But then suddenly, that same white horse appears in front of Arya to carry her away from the city of ashes. 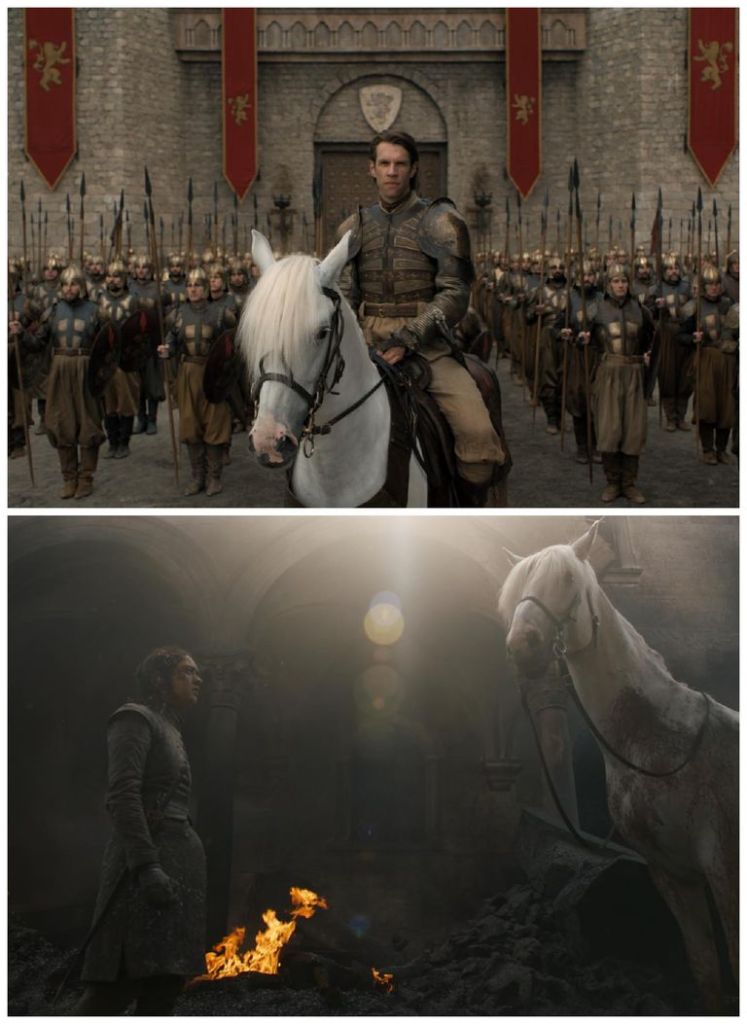 It’s technically possible that the show just decided to hire one actor horse to do both roles but honestly that seems pretty unlikely. The horse has very distinct traits and is wearing that same harness. It feels intentional—like an Easter egg the creators and producers decided to drop. They obviously wanted fans to notice that it was the same horse. So what does this mean? Did the horse somehow survive the blast from Drogon? Even though nobody else did? That’s what we assumed at first. But we love (and also hate) this theory that perhaps Arya and the horse are both dead. We mean—it would make sense. She literally had buildings falling on her, and fire raining down from everywhere. As one fan pointed out, “Yeah, I’m pretty sure Arya is dead too. She got all burnt up and a building fell on her. They made a point of showing us the death of the horse and the countless deaths of Arya. And yet they both rise from the ashes. If this isn’t some lord of light shit, I’m gonna be pissed.”

The only thing wrong with this theory is that Arya appears in the trailer for the next episode…so…whoops. Unless she died and was brought back to life, it appears she did actually survive the wreckage. We shall see what we shall see!! Only one episode left of Game of Thrones. Prepare yourselves. The end is here.

In the *MEME* time, please enjoy these hysterical tweets about last week’s episode. We all need a good laugh before the pain that will be the series finale.

And just one interesting edit…what do you think? Does this make Dany more relatable? Mayyybbeee. But also. Probs not.