It’s the musical revival that’s breaking box office records and sold out in the blink of an eye, so if you’re wondering how you can snag Funny Girl tickets starring Lea Michele on Broadway, look no further.

The show first opened in March 1964, launching the career of Barbra Streisand in the original production produced by Ray Stark. It’s a semi-autobiographical plot based on the life and career of comedian Fanny Brice, including her tumultuous relationship with entrepreneur and gambler Julius Wilford “Nicky” Arnstein. She’s regarded as one of the most celebrated performers of her era and the role of Fanny Brice is notoriously difficult for actors to embody.

So, the casting of a Funny Girl revival was nothing short of controversial. Lea Michele had been campaigning for the role for years, dating back to 2009 at the height of her Glee fame. Showrunner Ryan Murphy thought she’d be perfect for it, with Michele’s character Rachel Berry saving the Glee Club from defeat at Regionals with a solo performance of the iconic song “Don’t Rain on My Parade”. She’d also sing it at the Tony Awards that year.

But after accusations of workplace bullying from Michele’s Glee co-stars emerged in 2020, Beanie Feldstein snagged the role from Michele’s grasp in 2021. When the show debuted in April 2022, it got mixed reviews, with critics stating Feldstein sang “numbers she just can’t fully carry,” per The Guardian‘s review. So after just three months in the role, Feldstein announced her departure from the show and it was announced Michele would be taking over from September onwards. Ticket sales surged and skyrocketed in price as a result. Luckily for you, though, we’ve got the info you need on how to score Funny Girl tickets at a discount.

How much are Funny Girl tickets?

So how much are Funny Girl tickets? Like most shows on Broadway, it depends on where you sit and what day of the week you go, as well as whether the Glee star or her understudy Julie Benko is performing. Tickets cost, on average, $213.28 but went as high as $2,350—not including a $470 fee—for Michele’s opening night performance on September 6, 2022. 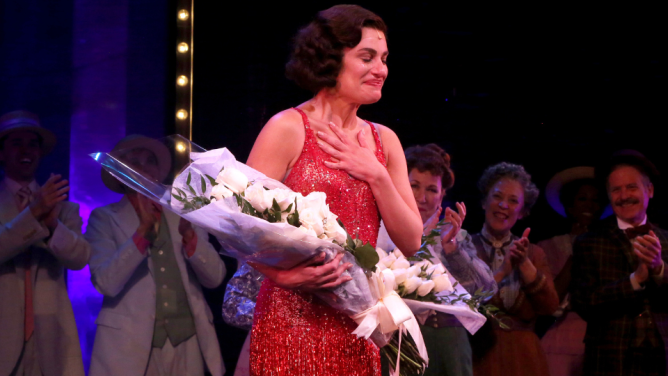 Where to buy Funny Girl tickets

Since Michele’s debut performance in late September 2022, tickets have sold out and only been available through trusted online resellers, like StubHub and Vivid Seats. The latter offers a $20 discount for purchases over $200—a 10 percent savings—with the code SC2022. Read on ahead for how to buy Funny Girl tickets on StubHub and Vivid Seats for a discount. 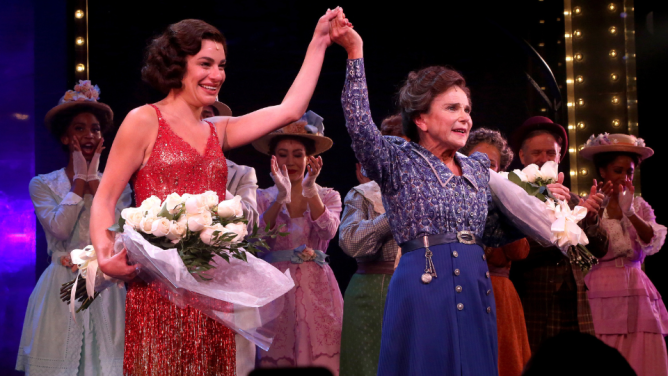 Who’s in the cast of Funny Girl?

In addition to Glee star and seasoned broadway performer Lea Michele as Fanny Brice, the cast of Funny Girl is an impressive list of on-stage talent. Here’s the complete cast list.

When Michele was cast in the Broadway production, she admitted she knew the pressure was on her to really step it up a notch, in an interview with the New York Times at the time. “​​“I feel more ready than I ever have before, both personally and professionally… [But] I will never be as good as Barbra Streisand,” she said. “Everyone here has been through a lot, and I just have to come in and be prepared and do a good job and be respectful of the fact that this is their space.”

Michele told The Tonight Show host Jimmy Fallon on January 13, 2023, that she’d “blackout” if she saw the original Fanny Brice, played by Streisand, in the audience. “It’s funny. This is the first show I’ve ever done where I love knowing that people are there,” Michele said. “The other night I saw a woman that I thought was her, and I felt like my mouth got dry and it was just like I started hearing ringing in my ears.” Michele did however receive a note from Streisand that made her cry. “Literally it was like a gold envelope. It flew in on doves,” Michele joked. “Everyone’s like: ‘Are you going to frame it? What are you going to do with it?’ I actually just put it in my safe at home.”

Feldstein, who’s best known for her supporting roles in films such as Ladybird and Booksmart, made her Broadway debut as Minnie Fay in Hello Dolly!. After being cast as the lead role in Funny Girl, she debuted on the stage as Fanny Brice in April 2022, only to depart after the reviews of her performance were lackluster. Feldstein left the production earlier than expected, too. Her final show was originally scheduled for September 25 but was brought forward to July 31, which means she only embodied the role for fewer than four months before stepping off the stage for the final time. “Playing Fanny Brice on Broadway has been a lifelong dream of mine, and doing so for the last few months has been a great joy and true honor,” Feldstein wrote in an Instagram post, on which comments were disabled. “Once the production decided to take the show in a different direction, I made the extremely difficult decision to step away sooner than anticipated.”

While the reviews for Beanie Feldstein’s portrayal of Fanny Brice were mixed, the same cannot be said for Lea Michele, whose performance on opening night received a total of seven standing ovations—four before intermission. In reviews of the Glee alum’s performance, the New York Times called her “stupendous”. The Guardian wrote: “Michele delivered, and Funny Girl has leveled up.” Vulture wrote: “Michele seems to face the pressure to not just be good, or great, but the greatest. This is less a star vehicle than gladiatorial combat. She makes it through with blood on the sand.”

It’s been a commercial success, too. Funny Girl collected a little more than $2 million over eight performances during the week ending on December 18, Variety reported at the time, which set a benchmark for the highest gross at the August Wilson Theatre and for the production. The stage version of Mean Girls held the prior house record with $1.994 million in 2018.

Where is Funny Girl performed?

Funny Girl is performed at the historic August Wilson Theatre in New York City, at 245 West 52nd Street in the Theater District of Midtown Manhattan.

How long is Funny Girl?

The Funny Girl run time is approximately two hours and 50 minutes, including one 15-minute intermission.

Funny Girl tickets are available for resale on StubHub and Vivid Seats. Use code SC2022 for $20 off orders of more than $200 on Vivid Seats.